Inspired by many of our favorite videogames, Disney’s Wreck-It Ralph delivers a funny, original and heartwarming tale about an 8-bit bad guy in search of a new life.

Nobody could have predicted that one of Disney Animation’s best features of the past few years would unfold in the world of 8-bit videogames—an environment famous for its crude and primitive use of animation. It’s even more impressive when you learn about the painstaking process of producing Wreck-It Ralph and how the creative team pushed the limits of CG animation to build the various worlds and diverse characters (over 180 of them) of one of fall’s top movies.

The film’s talented director Richard Moore, a veteran of TV shows such as The Simpsons, Futurama and Drawn Together, was tapped over three years ago by Disney/Pixar Chief Creative Officer John Lasseter to tackle a project set in the world of ’80s arcade games.

“John likes to hear lots of different pitches, at least three different ideas in that pitch session to him,” Moore recalls. “It was just kind of thrown out there that ‘We wanted to do something about video games here, do you think you’d be interested in that?’”

Moore and producer Clark Spencer (Meet the Producers, Bolt, Winnie the Pooh), decided to center the movie on a character that had a major conflict, a real dilemma to deal with, beyond the usual storylines of simple games.

“Ralph (voiced by John C, Reilly) is the bad guy in an old 1980s arcade game who is wondering—after 30 years of playing in his assigned role—‘Is this it?” explains the director. “So, like a lot of us, he tries to solve in an internal problem with an external solution: He’s going to try and win a medal—if he could just win one, he thinks he’ll earn the kind of love and respect the game’s hero (Felix) gets.”

The seasoned director admits that at some point in his career, he sort of identified with Ralph’s mid-game crisis.

“I’d been working in television for a long time,” he says. “After you’ve directed this hugely popular network show like The Simpsons, you wonder where you are going to end up after that. I had felt the way Ralph does because he begins to think, ‘Am I going to wreck a building for the rest of my life? And I felt like wow, maybe this is what my life is all about. I just work in TV animation and go from one project to another. Maybe that’s all there is? So there’s definitely a real-life aspect to this story. It explores the possibility that you can move from one environment to another and find yourself in a larger, different world.”

Our nine-feet-tall hero’s journey takes him to three distinct gaming worlds, each of which have specific defining color schemes and shape requirements.

“One of the biggest challenge for us was that each world had to feel authentic and match the gaming universe they represented,” explains Moore. “The movie also had to feel homogeneous as a whole—We had to remind the team that these 8-bit characters move and act differently from the characters in the first-person shooter world. Part of our job was to celebrate the differences between the three main gaming worlds the story unfolds against.”

Moore and his story team spent their first year on the project fine-tuning the personalities of the characters and making sure the story was meaty and emotionally powerful enough for filmgoers to get drawn into this brave, new world.

“We had to put aside the fact that our story was set in the world of videogames and really concentrate on the story,” he recalls. “We didn’t want to give in to the temptation of just taking the easy route and just play with the gaming aspects of the projects. The heavy lifting part of the job was to craft a story worth telling with characters that we really cared about. The world is quite rich and will provide this great texture, but our job was to create something that would resonate even if you weren’t familiar with these games. After we did that, the whole thing started to synthesize naturally, without us trying to shoehorn a story in this specific universe.”

Just like Genndy Tartakovsky who made a smooth transition from the world of TV cartoons to features with Sony’s Hotel Transylvania, Moore believes that his small-screen background prepared him quite well for the movie. 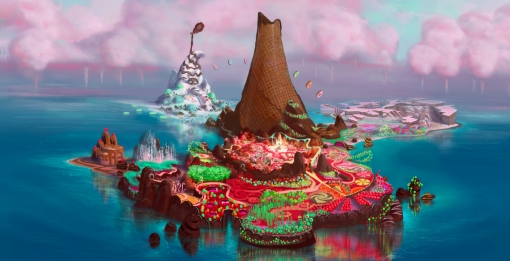 “Of course, TV has a faster pace, and it’s an environment where your first instinct needs to be right, and your second instinct absolutely hast o be right, you just don’t have the time to mess around,” he points out. “When you’re directing a 90-minute movie over three and half years, you have a different gestation period. On that level, you are working with a different machine. However, the intent of my role on The Simpsons was pretty much the same as my role on this movie—it’s about telling stories with characters that we care about.”

Looking back at his early Simpsons days, Moore says he, exec producer James L. Brooks and creator Matt Groening knew that the project worked very well as interstitials on The Tracey Ullman Show, but they also knew that it needed a lot more to succeed as a 22-minute series.

“If it were to survive the jump from interstitial to half-hour, we needed the audience to invest in these characters,” he says. “In those days, not only did they have to be funny, but the audience also needed to feel the connection with that family dynamic. Every show that I directed, it was important that we felt and understood the love they had for each other, although they yelled and fought and tried to strangle each other!”

Moore says he’s been huge fan of the CG animation that Disney was able to create on Tangled.

“That feature was CG, but it really felt like that classic Glen Keane era of 2D animation,” he notes. “I inherited what was already established at the studio. The relationship he forged with the 3D animators and the insights he instilled was vital. He would sit at a Cintiq as shots played and would do 2D drawings over the animation. It was an easier fit than you might think…we all speak the same language.”

The animation principles that Moore learned at CalArts during the 1980s were the ones that helped him on his TV projects and his first feature.

“TV shows and movies are more similar than you would think,” he sdds. “I applied the same principles on The Simpsons and Futurama and Wreck-It Ralph. I think the mechanics are the same, but in movies, you are looking at a profound shift in the point of view of the characters. There was a real emphasis in establishing that character arc for Ralph, although he’s going through a series of episodic events.”

“When Rich asked me to work on the movie, I was very excited, because I had limited experience with CG animation, and I just knew this movie was going to be big, weird and unlike any other animated film we had seen before,” says Gabriel, who directed Pocahontas, The Rescuers Down Under and the Oscar-nominated 2004 short Lorenzo. “Our primary goal was to create a video game world that people would want to go into. Then, we had to build these various game worlds that Ralph visits, and make sure that each one of them followed a specific shape and color scheme. We paid a lot of attention to the details and origins of each world, using both real-world and gaming universe references.”

For example, Fix-It Felix (the good guy) and Wreck-It Ralph live in a simple 8-bit world that is based on square and rectangular shapes, while the second world, the first-person shooter universe is more of complex universe, which relies on circles and oval shapes and has green as its dominant colors. Then, filmgoers will enter the Ralph’s new friend Vanellope (voiced by Sarah Silverman) who lives in the pastel-colored Sugar Rush world, which takes its cue from Art Nouveau and the design masterpieces of Spanish architect Antoni Gaudi.

“Sugar Rush is a 1990s cart-racing game that is set in a world made entirely out of candy,” explains Moore. “This world is more whimsical, and has a classic Disney feel, mixed with an anime influence.”

It’s in this world that Ralph meets Vanellope, a character whose relationship with the hero centers the movie.

“Vanellope lives on the fringes of Sugar Rush. She’s a glitch—a programming error—so she’s ostracized from the activities of Sugar Rush and has to take care of herself. Ralph and Vanellope don’t really like each other at first, but they start to realize that they’re a lot like. They’re both misfits.”

The director believes that a good movie should make the audience feel as if they’ve traveled along with the lead characters.

“I think the audience will expect comedy and action,” Moore says. “They’ll expect state-of-the-art animation and spectacle. But I think they’ll be surprised by how much heart the movie has and how much they’re going to love these characters!”

And Now, For Something Completely Different…
Someone Up There Likes Us