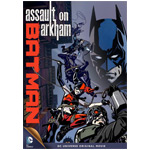 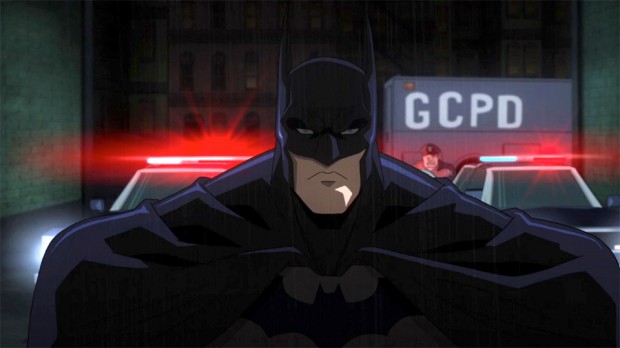 The Suicide Squad takes center stage in Batman: Assault on Arkham, which mixes the gritty world of the hit video game with a stylish take on the big crime genre.

Warner Bros. Animation has been producing DC Universe original animated movies for several years now, but few are as likely to be as full of surprises for fans as Batman: Assault on Arkham.

Based on the Batman: Arkham Asylum series of video games and due out Aug. 12 on Blu-ray, DVD and VOD, the most obvious surprise is that the movie is less about Batman than it is the DC cult-favorite comic-book series Suicide Squad.

Screenwriter Heath Corson, who also scripted the previous DC Universe release Justice League: War and is scheduled to write another in the series, says he’s a longtime comics fan and that Suicide Squad, written by John Ostrander and published from 1988-1991, has long been one of his favorites. “That’s the DNA of this,” he says. “It really is a Suicide Squad movie and I think that’s going to be a huge shock to fans once they find that out. I think they’re expecting a Batman adventure á la one of the Arkham games.”

Despite being a huge fan of the Squad, Corson says putting them in the movie was part of the project when he was asked to take it on. Producer Alan Burnett called “and he said we’d like to find a way to get the Suicide Squad in there and I said, ‘I’m in!'” Corson says. “I said, ‘What version of the Suicide Squad?’ And he said, ‘I don’t know, let us know who you want and what you think the story would be.'”

There was some negotiating on which characters to include. With the games being relatively grounded in realism, superpowers were downplayed. Corson says Deadshot and Captain Boomerang form the core of his vision of the team, while characters like King Shark and Harley Quinn were added from the most recent versions of the comic and Bronze Tiger was replaced with Black Spider to accommodate a plot point.

So with the characters set and the world of the games as a setting, Corson says the most compelling idea was to do a stylish modern heist movie in the mode of Guy Ritchie’s films, such as Lock, Stock and Two Smoking Barrels.

“I said it’s sort of like Ocean’s Eleven if, at every step of the way, Brad Pitt is trying to kill George Clooney,” Corson says. “They really liked that and they wanted me to go in that direction. … I realized I had pitched a heist movie and heist movies are super hard, so I had to build it from the ground up.”

To work, it also had to be fast-paced, witty and more adult in tone than typically seen in previous DC Universe features.

“It’s not an adaptation, so I had a little bit of a freer hand to (pace it) as fast as I could,” says Corson. “Also, because we’re doing a heist movie, those things are breathless. They gotta move so quickly that you’re just keeping up. So that sort of was baked into the concept that it needed to move as fast as it possible could.”

Jay Oliva, a veteran storyboard artist and director of several DC Universe features who co-directed Assault on Arkham with Ethan Spaulding, says he was surprised by the script the first time he read it, but got the Guy Ritchie-style vibe Corson was shooting for.

“I realized this is a heist film and I then pitched an idea to the producer, James Tucker, and I said, ‘Hey, James, if I directed this the way I would normally do one of our DC Animated Universe features, I don’t think it would work out too well.’ And he said, ‘Well, what are you thinking?” I said, ‘What if I directed this like a Guy Ritchie film?’ … And he liked that idea.”

With so many different influences, Oliva says they went for a tone in the visuals and with the music that is distinctly different from the classic Bruce Timm look or the recent New 52 features.

“I don’t try to make these films to compete with other animated films out there; I’m thinking of what’s the last great comic book film that I’ve seen,” says Oliva. “For example, I just saw Captain America: The Winter Soldier a couple months ago and I thought it was fantastic. So whenever I approach these animated films for DC, I’m always thinking to myself, ‘This is my competition.'”

Oliva also took a cue from Zack Snyder — Oliva drew storyboards for Snyder’s Man of Steel and its upcoming sequel Batman v. Superman: Dawn of Justice — who intentionally changed his style to one influenced by Terrence Malick for Man of Steel.

“Most people think that Zack is a one-trick pony, and this is how he does it; but the fact is that he actually likes to try different things if it fits the story,” he says. “And off of his cue, when I was doing this, I was like, ‘Let’s try directing outside my style.'”

This movie called for an approach that used more humor and had a more adult level of violence and even a bit of sex. For the former, Oliva says Tucker’s instincts were the strongest influence. “James is a master of knowing when to put a joke in or when to add some levity (from having worked on) Brave and the Bold,” he says. “I learned a lot from working with him.”

Making it for the Fans

“I was told to make this as adult as you can, make it something you want to see, so I really wrote for a fan like myself,” says Corson. “I tried to throw in as much as I could and make the world as dark and as vicious and as violent as Gotham really is.”

There also was a chance to have a lot of fun. “I knew I wanted to see the property room at Arkham, which I can’t believe nobody has ever done before,” says Corson. “I love the idea of these guys playing with other villains’ weapons, which is super fun.”

Figuring out character designs — a task handled by Jon Suzuki — that worked in animation but still evoked the game was another challenge. “The video games are CGI and it’s really hard for us to try to replicate that, so we tried to find a stylized version of the video games and what we did is we looked at Batman,” says Oliva. “Whenever we design a show, we always base it on our main character.”

Mapping the proportions of the video game version of Batman over to animation allowed the crew to figure out proportions that would work for the other characters.

“The nice thing about animation is I don’t have to worry about the stunt man complaining that he can’t do this particular move that I’ve told him to do. If I can draw it, Batman is gonna do it!” — Jay Oliva, co-director, Batman: Assault on Arkham

Oliva says his favorite design was the one he came up with for Harley Quinn, where neither the costume she wears in the game or in the current comics seemed right. “I basically took Bruce Timm’s classic design and, on my desk I have the Adam Hughes Girls of the DC Universe Harley statue, that I love, and so I was looking at that and it was like that’s what I want,” he says. “I want her to pull off her hat and her pigtails basically fit into where those little ear things are on her Harley outfit. And then what I did is I took that classic look and I gave it kind of a punk, Tank Girl feel.”

Another element borrowed from the video game are the action sequences, particularly the fight scenes. “It’s ballet for men, because it’s just really a highly choreographed dance,” says Oliva, citing as influences 1980s action films, Hong Kong fight choreography and Bruce Lee. “I’m just like, I’m going to put all things that I love into my action sequences, whether it’s a hand-to-hand fight or a big chase sequence. …

The nice thing about animation is I don’t have to worry about the stunt man complaining that he can’t do this particular move that I’ve told him to do. If I can draw it, Batman is gonna do it!”