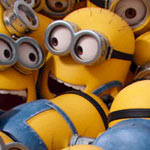 The makers of Minions had to figure out ways to bring the little yellow helpers into the spotlight without losing their considerable charms.

The minions of Despicable Me and Despicable Me 2 have spent their entire careers becoming the ultimate, well, minions. They stood as a herd in the background, worshipped their delightfully evil leader with comical abandon, and provided the sort of classic physical comedy you’d expect to see in a Buster Keaton or Charlie Chaplin film.

But that wasn’t enough because, in Hollywood, you just can’t play a supporting role forever. So helmers Pierre Coffin (Despicable Me, Despicable Me 2) and Kyle Balda (Dr. Seuss’ The Lorax) set out to bring these impish little creatures to the forefront in Illumination Entertainment and Universal Pictures’ Minions. 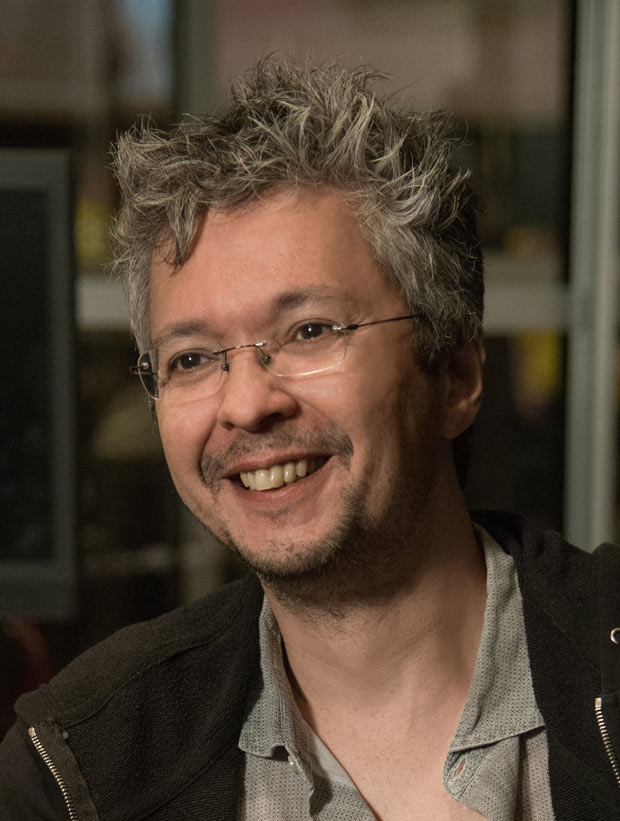 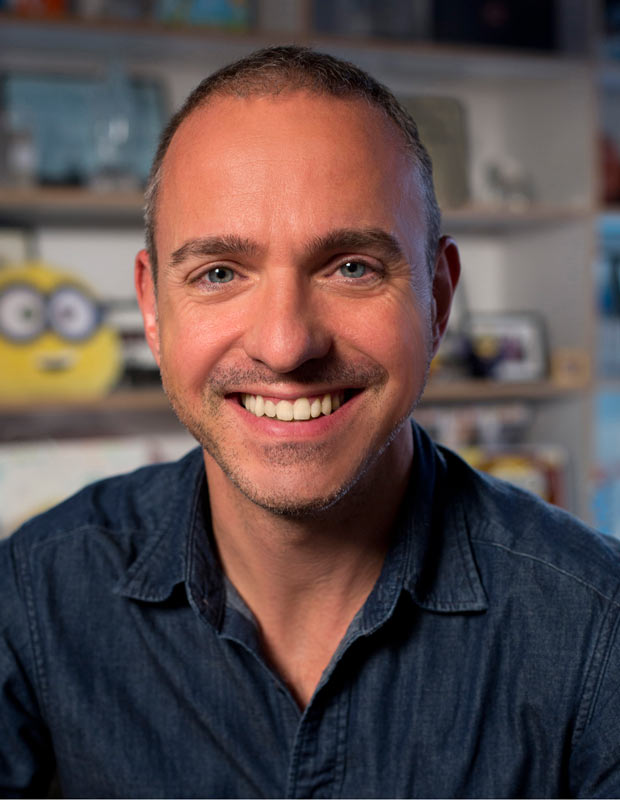 Anyone who’s seen a minion has wondered about them: What are they? Where did they come from? And, seriously, what are they?

And that’s where this film comes in as an origin story, showing the minions evolving alongside a host of evil creatures, despots and emperors, as they desperately try to glom onto the one whose twisted ways elicits one of the few words we can clearly understand a minion saying: Boss.

The opening sequence takes us through an evolutionary backstory that moves from single-celled organisms to prehistoric times and then into modern history. At each step, the minions give their devotion to a leader and then sometimes accidentally destroy him or her. Whether it’s a T. rex inadvertently sent into an active volcano or Napoleon on his quest for world domination, we see that an evil leader might not actually benefit from using our beloved yellow devotees.

“Those sequences were a lot of fun,” says Balda. “There were a lot of them that didn’t make it into the movie because we didn’t want to go too far off the main story.”

Minions – But Not Minions

Even though these canary-colored beings quickly became audience favorites with moviegoers of all ages, taking them to the front of story wasn’t initially as easy as you’d think. Coffin and Balda, along with screenwriter Brian Lynch (Puss in Boots, Hop) had to decide how to turn a creature known for moving as part of a huge, unintelligible group into a singular main character.

“We had to take our three main characters – Kevin, Stuart and Bob – and make them less like minions and more emotional, individual,” says Coffin, who voices all three main minions. “Kevin is a leader and he is the one who makes the plan, while Stuart is more of a teenager and Bob is like the toddler and very emotional.”

Coffin also felt it was important to have a narrator who could set the story and guide the audience a bit since the three main characters in the story didn’t have a language that was easy to understand. Geoffrey Rush’s voice gives the audience essential information and “empathy” for the characters, says Coffin.

Balda continues: “We had to differentiate them so that they were distinct individuals and if you put them all together they’d make one character in a way.”

As they pulled these three characters forward, there was a host of unusual consequences. Suddenly two of the most endearing minion characteristics – a strange, mumbling language and uniform Tic Tac style body and facial design – became a liability for the storytellers. The filmmakers had to find a way to clearly communicate deep emotions and district reactions to things that happen in the movie.

“Bob was the only one who had a slightly different design at the outset, so we didn’t want to break the integrity of that,” says Balda. “A big inspiration for us with these characters was Peter Sellers because he often didn’t say a lot in his films even though there was a lot going on physically with him or around him, but you could really see it all in his eyes, the emotion of the scene.”

The three main minions set off on a journey once they see their fellow minions thrown into a deep depression when they don’t have an evildoer to follow. Their quest leads them straight to Scarlett Overkill, who is voiced with diabolical charm by Sandra Bullock. Jon Hamm graces her less aggressive husband, Herb Overkill, with vocal stylings. But their trip is frustrating and fraught with all the kinds of obstacles that provoke the most minion-ish behavior possible.

For animation director Pierre Leduc, it came down to preserving the look and feel of the minions while adding something a little different here and there to signal to the audience the personality and emotions of the three main minions.

“Really we had to use body language to show the feeling of the three main characters because you didn’t have voices,” says Leduc. “The biggest challenge was to make them understandable to the audience. So Bob moves like he’s a child and when he’s upset he reacts with a child’s body language. This seemed to make each one of them different so the audience would know they’re not the same minions.”

One scene – a favorite for both Balda and Coffin – in which the minions try to hitchhike to Manhattan relies heavily and brilliantly on the body language of the three star minions. As Bob becomes despondent over their struggle, he hunches, puffs and slides off a rock in his exasperation. And his body language makes us “feel what he’s feeling,” says Coffin.

For Leduc, it was also difficult to work with a minion who only had one eye because animators use the eyes to convey so much. This put even more pressure on developing a set of gestures and way of moving for each character so that it would become visual shorthand for the audience and a way to immediately grasp how each character was feeling and what they were trying to communicate.

Going For Laughs – And More

When the minions made their original appearances, they provided comic relief and adorable, if clumsy, little cutaways from the main action of a film. This worked great when the minions were in the background, supporting the main characters and story. But the filmmakers quickly realized the laughs couldn’t come at the rate they had during minion moments in the Despicable series. For the minions to stand on their own and carry a 90-minute film, the laughs would have to come at a different pace.

“At first we tried some cuts that had big laughs within minutes of each other and that didn’t work because it was too much,” says Coffin. “When the minions are the main characters, you need more emotions in between those laughs, you need to care about what they want and where they’re going with the story.”

As the filmmakers tried different passes at the minions story, it became clear they’d have to use the same kind of timing most main characters enjoyed in a comedy and that the minions who remained in the background would have to become the minions of the three main minions. So, the herd of minions would still have the classic pratfalls and big silly laughs, but now the main characters would earn their laughs as they moved through the story.

“You’re more invested, and the laughs mean more, when it comes from a place of empathy for what these three want,” says Balda. “Once we found this way into the story then it started to come together.”

Since the story takes place in the 1960s, both music and the overall look of the film had to reflect the time. And the visual effects and lighting and compositing teams spent time on specific tools to get the look of the era.

The crowds of minions were also a challenge. They had to move in the expected adorable, humorous fashion as a large mass and somehow still look like individual minions moving together.

“We wanted everything to look believable but vintage, from that time period,” says Nikko Brack, lighting and compositing supervisor. “So we researched films like Lawrence of Arabia, Bullitt and Planet of the Apes, for the film because there were little things each of these movies had that helped us.”

One scene in particular, in which our three main minions catch a ride to Villain Con – a hilariously odd gathering of villains held in New York – was inspired by the chase sequences of the legendary Steve McQueen film. After hitching a ride with what appears to be the ideal American 1960s-era family – The Nelsons – on a road trip, the minions quickly realize they’re in the company of bank robbers after a spontaneous heist leads to a high-speed chase with a legion of police cars in tow.

The film also borrows some of the best sounds of the era, featuring songs like The Beatles’ “Got to Get You Into My Life,” Jimi Hendrix’s “Purple Haze,” The Turtles’ “Happy Together,” The Who’s “My Generation,” and (wait for it, wait for it) Donovan’s “Mellow Yellow.”

As the story takes the minions through ’60s era Manhattan and London, we’re often guided by the lyrics in the songs or set up for the current or coming scenes. It’s another element of the film that can function on two levels, as the music reflects the era and the words in the songs can become their own humorous in-joke.

For Coffin and Balda, it was important to create a film that held its comic appeal for both children and the adults who bring them to the movie. And that could only work with carefully structured scenes that worked on many levels. This could mean physical action, body language or dialogue.

Balda believes the minions have always engaged audiences across age groups because they’re evil – but not really that evil – and relatable in their bumbling quests. The co-director is quick to point out that the most awful thing they really do is blow a raspberry at their leader or each other.

Coffin sees it much the same way. He’s also a moviegoer who knows what it’s like to be the adult taking a little one to see their favorite characters on the big screen.

“As a parent, I know it’s not just children who go to see the minions in movies,” says Coffin. “So we layered the scenes with maybe one central action in the foreground and then something happening in the background that would be more subtle, more for adults because in a film you’re hoping to be sufficiently witty to entertain everyone during the time they give you.” u