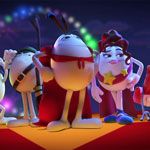 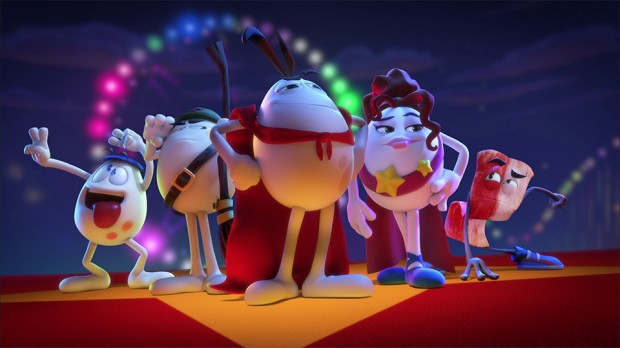 Transition to CGI opens up a world of success for Huevocartoon and its surprise U.S. success Un gallo con muchos huevos.

Box-office aficionados woke up after the weekend of Sept. 4 to a surprise in that highly analyzed tally of ticket sales: a CG-animated film from Mexico titled Un gallo con muchos huevos opened in 10th place with an impressive domestic gross of $4.8 million.
That total, earned by screenings at about 400 cinemas nationwide, makes Un gallo con muchos huevos, which translates as A Rooster with Many Eggs, a groundbreaker: It is the first Mexican animated feature to open in the United States with a limited theatrical release. Produced for about $5.3 million and distributed by Pantelion, a partnership between Lionsgate Entertainment and Grupo Televisa, the movie opened Aug. 21 in Mexico and held the top spot at the box office for three weeks. Additional foreign releases are set for Russia, Europe and Latin American, all boding well for the feature.
But the film’s success — it’s earned a 73 percent fresh rating from critics and 84 percent positive audience score on Rotten Tomatoes.com — is clearly less of a surprise to those familiar with the property’s history in Mexico, which includes a hit website, merchandising and a pair of 2D animated features.

Created by brothers Rodolfo and Gabriel Riva Palacio — who also wrote, directed and produced Un gallo — as a website called Huevocartoon, the original idea was to create small skits that made fun of everything from movies to politics using animated egg characters. But when the first cartoon was posted in 2002, it was an unexpected hit, says Rodolfo Riva Palacio.
“We were expecting to have around 6,000 visitors in the first six months, but what happened is that immediately everybody loved the idea of making a society with eggs and we had around 3 million visitors to our website in just two months, which was crazy!” he says.
This, of course, was before Facebook, Twitter and even YouTube, making the success remarkable enough for the brothers and their company, Huevocartoon Productions, to put out a successful line of merchandise.
That piqued the interest of Videocine, a division of Televisa, which approached Huevocartoon about doing an animated movie. Una pelicula de huevos (A Movie of Eggs) was released in 2006, followed in 2009 by Otra película de huevos y un pollo (Another Egg Movie and a Chicken). Both were smash hits — Riva Palacio says the first movie was the second-highest grossing Mexican film of all time when it was released, and it was topped by the sequel.
But while the films were a hit in Mexico and scored sales in other Latin American markets and Spain, Riva Palacio says it was clear that a CG version was needed to spread the franchise’s success even further.
“We needed training, we needed to acquire appropriate equipment, acquire the proper deals, etc., and so it took us almost six years to make that transition from 2D to CGI,” he says.
That transition was essential to breaking through to a global audience. “2D is different; it gives you a sense of reduced audience,” says Riva Palacio. “It doesn’t feel like a global movie. So this is really the one that is taking us across the border.”
Funding for the movie mostly came from government programs that subsidize movie projects or offer tax breaks, with a small amount coming from private investors, says Riva Palacio. Videocine and Pantelion also supplied significant funding. Pursuing some of those tax breaks led the company to open a studio in Guadalajara, but when the funding failed to come through production on Un gallo moved back to Mexico City.
Focus on Story

Production took about 2½ years, with much of the effort going into developing the story. “We did 13 different drafts of the script before going in and recording with the actors and once we recorded the actors, we went into the animatic, and the animatic really had to be almost what the movie was going to be in the end,” says Riva Palacio. “We spent months trying to get the right rhythm, changing lines changing recordings and so on in order to get the movie where we wanted it, where we thought the movie would work.”
With Gabriel Riva Palacio supervising the animation, the company had to develop much of its own software as an alternative to the expense of buying licenses for top applications for the 120 artists who worked on the movie. There also was programming developed to help speed up the pipeline, all of which took several years of research prior to animation starting on the feature.
Having a tight animatic also made sure there was no waste. “You won’t see any materials like a directors cut, like DVD extras — there are none,” says Riva Palacio.
Nearly all of the animation talent on the film was from Mexico. Riva Palacio says the schools in Mexico are graduating a lot of talented animators, though they still needed some training to adjust to the pace and output required in a working studio environment. They also had to learn new skills because, for example, the pipeline on Un gallo was streamlined to save time by having animators light their scenes.
Un gallo is the first animated movie distributed by Pantelion, which Televisa and Lionsgate founded in 2010. The filmmakers’ relationship with Televisa and its Videocine division opened the door for a deal with Pantelion, which Riva Palacio says was convinced to try the project based on some clips.
The studios’ research with focus groups backed up its initial support for the movie, he says. “The movie got one of the highest scores for Lionsgate in years,” says Riva Palacio. “We had over 98 percent acceptance and 98 percent of people said they would recommend it.”
Pantelion planned the release to target Spanish-speaking markets in the United States, eschewing the idea — and cost — of attempting a wider release with an English dub.
“That would have cost Pantelion about $20 million, at least, and they didn’t want to risk it because it was an experiment,” says Riva Palacio. There is an English-language version of the movie that likely will get a home-video release.
For Riva Palacio, a graduate of the American Film Institute, having the film released in the United States has been extremely exciting. “It was a dream come true, having the premiere here and doing all the junket press. I felt like a Hollywood star,” he says.
And, as with any success, discussions of the follow up are already happening, though Riva Palacio says he may try to make a non-egg movie first. “The studio has already asked me for the sequel; they want it right away,” he says.

Heroes With A Twist
Cosmic Confidence