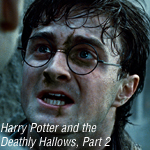 Harry Potter cast a record-setting spell on the box office this weekend, with the premiere of Harry Potter and the Deathly Hallows Part 2 selling a stunning $168 million worth of tickets.

Those numbers leave in the dust the previous record, set in 2008 by The Dark Knight, which opened with $158 million domestic.

The news was less impressive for Walt Disney’s Winnie the Pooh, which opened with $8 million and finishing in sixth place for the weekend.

Transformers: Dark of the Moon continued to do well, landing in second place for the weekend with $21 million domestic. That pushes its domestic total just past the $300 million mark and its worldwide gross now totals about $762 million.

Comedies Horrible Bosses and Zookeeper landed in the third and fourth spots, while Disney-Pixar’s Cars 2 was in fifth with $8.4 million for the weekend. Cars 2 has earned about $165 million domestic and about $121 million overseas for a $286 million total.

As the movie and fandom world head into Comic-Con this week, the next major push comes from the superhero pic Captain America: The First Avenger, opening Friday opposite the comedy Friends With Benefits. The summer blockbuster season continues the following week with the debut of Jon Favreau’s Cowboys and Aliens and Sony’s hybrid take on The Smurfs.