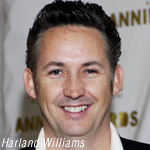 Rainmaker Entertainment has teamed up with comedian Harland Williams to develop and produce an original animated feature film based on the company’s mascots, Ting and Juma.

“Having a creative outlet in animation is always inspiring,” said Williams. “With Rainmaker Entertainment and its highly talented team of artists, producers and directors, I’m like a kid in a candy store and can’t wait to get to work. I’m ready to take the characters of Ting and Juma to a new level and for the first time give them a real voice.”

The Canadian comic has acted in such live-action films as Dumb and Dumber, The Whole Nine Yards and has lent his voice to the animated features Robots, Meet the Robinsons and Madagascar: Escape 2 Africa. He also has performed as a standup comedian on Late Night with David Letterman, The Tonight Show, Late Night with Conan O’Brien and for programs that aired on HBO and Comedy Central. He currently is voicing the role of Monster on the upcoming Nick series Robot and Monster.

Williams’ background includes a stint at Sheridan College, where he studied painting and drawing, leading to the creation and publication of the Lickety Split series of children’s books.

“There’s no way of knowing what the always unpredictable Harland Williams will say or do next, but his wit and creativity make him an incredible asset to this original project. Harland naturally brings such an innovative comedic and quirky sensibility to the process which is perfectly fitting with the direction we are taking our slate of films at Rainmaker.” said Catherine Winder, executive producer and president of Rainmaker.

Rainmaker Entertainment has produced a number of original short animation films, most starring the company’s mascots, Ting and Juma. The characters were first introduced in Stumped, a 50-second short unveiled at 2010 Winter Olympics in Vancouver which had the duo creating a new snow sport. The short played at numerous venues during the Olympic Games, including the BC Canada Pavilion and at the VX 2010 Showcase. Most recently, Ting and Juma starred in Zapped! which is being screened on YouTube.

As a reminder, here’s a look at Zapped!: