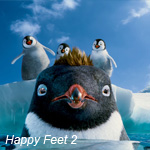 The second time is too much of a charm for the dancing penguins of Happy Feet Two, which opened to a $22 million box-office total domestically. The first outing of George Miller’s Oscar-winning feature made $41.5 million over the same weekend in 2006. The CG-animated birds had tough competition from Twilight: Breaking Dawn—Part 1, which made $139.5 million domestically and $144 million overseas. The overall gross of $283.5 million beat the vampire franchise’s previous global records.

Warner Bros.’ president of distribution Dan Fellman told The Hollywood Reporter “We certainly didn’t open to the number we expected, but hopefully we’ll catch up over Thanksgiving week and weekend, Our exits were very good, but there was a lot of competition for the female audience, between Twilight, Jack and Jill and Puss in Boots.”