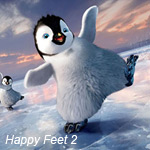 George Miller’s dancing penguins of Happy Feet Two will be aiming for the family audiences this weekend, before Disney’s The Muppets and Sony/Aardman’s Arthur Christmas steal them away on Wednesday.

Warner Bros.’ 3-D animated sequel is projected to bring in a modest sum of $30 to $35 million, while Twilight: Breaking Dawn—Part 1 is expected to gross $140 to $150 million in tickets sales. Happy Feet Two will also open in 293 Imax theaters in the U.S. and 84 Imax houses internationally. Featuring the voices of Brad Pitt, Matt Damon, Elijah Wood and Robin Williams, the movie received only 40% on rottentomatoes.com, reflecting the fact that most critics kind of hate it! (Not that reviews mean anything these days: Breaking Dawn scored an even worse 29%). 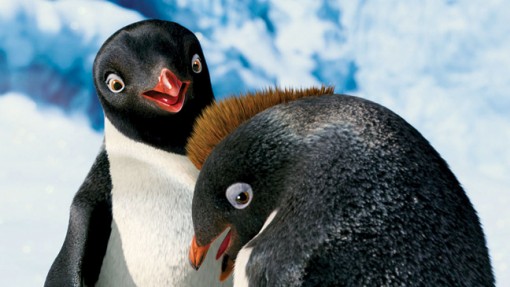 Here are a few quotes from various outlets, so you can make up your own mind about seeing it this weekend!

“On the Endurance-O-Meter, the Happy Feet Two needle swings from ‘vaguely tolerable’ to ‘cruel and inhumane.’ There’s something about these films, something about the working-over these songs suffer—a wrongness that’s intangible but inescapable, like the unseen menace of a bad dream. …The indiscriminate viewer, i.e. most moviegoers under the age of 12, will be in hog heaven. For grumpy old men and women, ages 20 and up, mileage will vary, to say the least.”

“It’s hard to resist dancing penguins, but Happy Feet Two may make you want to try.”

USA Today points out that…

“For a computer-animated movie about dancing penguins, it’s surprisingly leaden. Not even the impressive voice talent can rev up this clumsy spectacle.”

“The wondrously eccentric, eco-conscious sensibility George Miller brought to his 2006 penguin-themed toon yields an altogether less remarkable Antarctic adventure. Though it retains the buoyant musical stylings and splendid visuals that made its predecessor so distinctive, this chatterbox of a sequel loses its way with a raft of annoying side characters for which the slender narrative framework provides far too indulgent a showcase. That the result feels closer to the antic, fast-talking style of much contempo animation won’t necessarily keep Warners from achieving another family-friendly holiday hit, and 3D ticket surcharges should help counteract less-than-glowing response.”

“What appeared fresh and fun back in 2006 now feels like recycled goods in Happy Feet Two. The first time around, the sight of multicultural penguins singing and dancing in a gorgeous, environmentally threatened setting seemed disarmingly novel. But while a number of new characters have been introduced into the zoologically varied cast, the format and themes have a shopworn air that even the 3D Antarctic vistas and intermittent cleverness can’t surmount.”