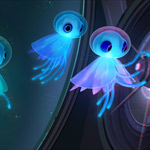 Toronto’s hot animation hub Guru Studio (Paw Patrol, True and the Rainbow Kingdom, The Breadwinner) has unveiled the first trailer for its latest short film, Space Between Stars. The creative short is the brainchild of in-house artist Samuel W. Bradley and centers on some ethereal creatures exploring a big, abandoned space station.

“Space Between Stars is a science fiction fable about the nature of conflict.” says Bradley. “I was fortunate to work with an incredibly talented group of artists that successfully achieved our goal of creating emotive and compelling characters in a rich, stylized environment.”

Inspired by Sam’s art, the studio assembled a team of artists, many of whom had worked together at Guru as part of the Oscar nominated feature The Breadwinner. They built a custom pipeline that could seamlessly combine 2D and 3D artwork on screen. The short’s music is by composer Jim Guthrie (Sword and Sworcery, Soundshapes, Planet Coaster, Below) known for his award-winning work in film, television and most recently video games.

Guru Studio’s short film program was created in 2016 with a goal to discover and develop new creators and directors and to support them on their storytelling journey. Space Between Stars was selected among dozens of pitches from across the studio and marks Samuel W. Bradley’s directorial debut.

You can see the trailer here.