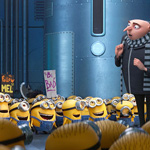 Illumination doubles the trouble by giving Carell’s reformed villain a brother and a 1980s-inspired antagonist for Despicable Me 3.

Few franchises have enjoyed the kind of giddy popularity that’s come for the Despicable Me franchise. The films – along with its spinoff film, Minions – have permeated the pop-culture space with stories about an alienated hero named Gru, who struggles with his desire to be evil and the leagues of canary-yellow creatures who want nothing more than to become his devoted followers and do his bidding.

With this summer’s Despicable Me 3, the filmmakers found themselves at the helm of an eagerly anticipated release that somehow had to feel new and stay true to the characters audiences already loved from the previous movies. The film shows us another side of Gru by introducing us to his twin brother, Dru, an upbeat and not nearly as evil “twin” who is desperate to learn his brother’s diabolical ways. Their family story becomes the next chapter.

“Dru’s personality really came to be through a back and forth between the writing, the drawing, Steve Carell, and the animation,” writes Eric Guillon, character designer on the film, through a translator in an email to Animation Magazine. “Ok, so they are twins, but the key for me is the hair. As twins, they have a strong resemblance, but one is bald and one is not. … I think, the story between the two brothers starts right there. My first instinct is to work with contrasts: so starting with black and white brings further possibilities: fat, skinny, short hair, long hair, shorts, fur coat, surfer.”

In the true comedic tradition of these movies — and those inspired by classic Buster Keaton films — the action follows in the same over-the-top style that was established early on in the series. The film cleverly uses this technique to bolster the relationship between Gru and his newly found twin.

“Obviously the sequence where (Dru and Gru) pretend to be each other was a great challenge in animation,” says Julien Soret, animation director. “We had to make people understand that they are playing the role of each other and over acting it so it becomes silly. And on top of that, Lucy and the girls had to understand they are doing this joke. So as acting performances, this sequence was very challenging and very exciting to do.”

The movie also leans into a 1980s feeling through classic songs from the era and the introduction of super villain Balthazar Bratt, voiced by Trey Parker. He’s a former child star from that decade, who fell out of favor when he grew up and no longer kept his cute tween looks. The one thing he did keep? His love of all things ’80s.

“One of the reasons I got into animation was that I was inspired by the A-ha video for the song ‘Take On Me,’ which was groundbreaking at the time,” says director Kyle Balda, who is gearing up for production on Minions 2. “So working with all the terrible fashion from the ’80s and the other things that are just so naturally funny was great for everyone who remembers that era. And even for people who weren’t there, these things — the dancing, the fashion and music — are pretty funny.”

“For the aspect of the ’80s character (for Balthazar Bratt), his outfit is helping a lot for us to find poses and attitudes. But when it came into the animation process, we wanted to give him really an ’80s kind of movement,” writes Soret. “And how can you differentiate someone moving in 1982 and somebody moving in 2017? By the way they are dancing! As a lot of people in the animation team were born in the ‘80s, we just had to remind us all the video clips of Cindy Lauper, Madonna, Genesis or Wham to inspire us for Bratt’s movements.”

Along with Trey Parker, the voice cast includes the returning Steve Carell as Gru and his twin brother Dru, Kristen Wiig as Lucy Wilde (Gru’s wife), Julie Andrews as Gru’s mother, Russell Brand as Dr. Nefario, Miranda Cosgrove as the oldest adoptive daughter, Margo, and director Pierre Coffin as Mel and many other Minions.

Producer Chris Meledandri credits the voice cast and animators with coming together for a collaboration that gives so much life to new and familiar characters.

“These are great artists,” says Meledandri. “They’re the best in the world at what they do and their dedication and commitment made characters like Balthazar Bratt really come alive in a way that makes them so memorable.”

While must of the workflow and tools have already been refined over the course of the two previous Despicable Me films and the Minions movie, this team was on a tight turnaround to get this next film in the franchise into theaters. So some new processes had to be developed to meet the new needs and timeline of this particular project.”

“In order to match the quality level that this movie required and to finish it on time the team had to grow about 30 percent more animators,” writes Soret through a translator in an email to Animation Magazine. “The challenge was to be able to follow this very talented but huge team. So we had to think about a new process of reviewing their shots with the directors of the movie and develop tools that allowed us to follow the progression of the animator’s work on every step of his shot. Without those tools the movie would have been impossible to finish.”

Meledandri, producer Janet Healy and the team in France and the Los Angeles have been credited with creating high quality animated films that stick to a production timeline and budget that demonstrates a new way to make big animated films.

“It’s made it possible for us to take more risks really, I think,” says Meledandri. “We’ve worked with many first-time directors and artists and been able to give them the chance to do their best work and have that work seen by audiences all over the world.”

The Secrets of ‘Wonder Woman’
The VFX of ‘Valerian’