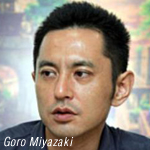 Studio Ghibli has set Kokuriko-zaka kara (From Kokuriko Hill) as its next animated feature film release, with Goro Miyazaki set to direct.

Due to be released next summer, the feature is based on a manga by Chixzuru Takahashi and Testuro Sayama and is about a group of teens struggling to save their clubhouse in the days prior to the 1964 Summer Olympic Games in Tokyo.

Hayao Miyazaki, Goro’s father, will plan the movie and write the script with Keiko Niwa. Toshio Suzuki is directing.