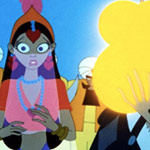 I had never been to San Francisco when I attended Richard Williams’ Animation Masterclass in 1997. All I knew was that he was the Animation Maestro, and I wanted to learn what he knew.

Scanning the nametags of my fellow attendees when I first arrived, I had spotted “Heart of Texas Productions,” and figured to myself, “I can hang around these guys and not worry if I accidentally let a ‘y’all’ slip out.” I introduced myself to R. Don Smith and Frank Gabriel. It was much to my advantage later, as I learned they had worked on Space Jam, Quest for Camelot and, better yet, Frank had actually worked on Williams’ The Thief and the Cobbler!

When we settled into our seats and Williams began, one of the first things he told us was, “I’ll happily answer any questions anyone has … As long as you don’t ask what happened to Thief.” I was puzzled. I had long awaited the release of Thief ever since I read about it here in Animation Magazine, and saw the theatrical trailer (where it had, much to my confusion, been advertised as Arabian Knight). So, when I spied it on a video shelf of Walmart, I had greedily dashed to the cash register.

Confused, I leaned over to Don and muttered, “So, what happened to Thief?”

“I’ll tell you on our next break,” he replied. How little I knew of “lost” animated features back then!

As I enter my third decade of teaching animation classes, my favorite cartoons to share with students are obscure animated shorts and feature — real life buried treasures, indeed! Especially within the context of Animation History, it’s a challenge in the beginning to convince young animators that any countries besides the U.S. and Japan have thriving animation industries, much less an impressive roster of animated features. Some of my favorite lesser-known features hail from France (The Curious Adventures of Mr. Wonderbird), Italy (Bruno Bozzetto’s Allegro Non Troppo) and Canada (Rock & Rule).

One of the toughest to find information on has been Rock Odyssey, an animated feature produced by Hanna-Barbera. I first read of the film in Jeff Lenburg’s Legends of Animation: William Hanna & Joseph Barbera. Although dismissively mentioned, it was enough to garner my curiosity. Despite an explosion of television production in the late ‘70s, it became obvious HB wanted to stretch their cartoon wings into feature animation.

The story follows Laura, who is seeking love throughout the first four decades of rock history, and goes through several incarnations as she does so. Her journey is narrated by Scatman Crothers (best known as Hong Kong Phooey), in the form of a living jukebox.

The film had some truly impressive visuals, taking the viewer on a rollercoaster ride through the 1950s. The young lovers pursued one another during various episodes, while Jack, the boyfriend, was beat up by a biker gang, comprised of green-skinned hogs. The color schemes and distorted perspective on the backgrounds are striking, but it was the fluidity of the animation that got me. During their TV days, for obvious budget purposes, the studio limited the character’s movement considerably. But here, Laura’s blonde locks flowed with a dreamlike quality only possible in feature animation. It seemed Bill and Joe’s studio was truly making some breakthrough progress “backwards” to their Tom and Jerry days.

Rock Odyssey was originally commissioned by ABC as a TV movie, but once the executives reviewed the first five reels, it was considered too graphic, reportedly for its portrayal of a sequence featuring the Vietnam War. It was rejected by ABC, then publicly shown only once in 1982, at the Second World Animation Celebration. Even though the objectionable portions had been replaced by archival footage of Yogi and friends getting down to the tune of Wham’s “Wake Me Up Before You Go-Go,” the film was quickly forgotten, apart from some stinging reviews. (Renowned animation historian Charles Solomon likened it to the “Howard the Duck of Animation.” Ouch!)

Although at times seemingly frantic, Rock Odyssey showed some inspiring possibilities as to what Hanna-Barbera features could have been.

A Visit to Dream Kingdoms

I remember first seeing Twice Upon a Time (1983) on HBO. It was produced in a cutout style, in a slightly more fluid approach than Terry Gilliam’s Monty Python titles. However, it appears that some characters were cut out of translucent colored plastic, and then possibly backlit, giving them a luminous quality, appropriate for the dreamlike plot of the film.

Producer George Lucas shared this somewhat dark tale regarding the two neighboring kingdoms of Frivoli and Murkworks, who are responsible for providing dreams for humans; in their world, we’re referred to as the “Rushers of Din.” And while the dream kingdoms are portrayed in color, our world is shown in black and white, where we move at double-speed. (I think with the advent of our PDDs — what I call “Personal Distraction Devices” — we’ve doubled that speed, since!)

Synonamess Botch, the film’s villain, wants to imprison the cute little Figmen of Imagination, who deliver our sweet dreams, so his gruesome fanged vultures can bring non-stop nightmares. (Hmm… Wasn’t that pretty much the plot of Monkeybone?)

Voices were provided by the late Lorenzo Music (Garfield, The Real Ghostbusters) and Julie Payne, another Garfield veteran (actually, I should say veterinarian), although I remember her best as office manager Aggie from NBC’s The Duck Factory. Another pivotal voice characterization, as the villain Botch, was Marshall Efron.

Like so many other animated films, the most memorable scene (and fittingly so, in a film about dream kingdoms) was a sequence where Ralph and Mum, the story’s true heroes, suffered from a nightmare bomb. They were pursued by deadly versions of everyday cubicle supplies like scissors, staple removers and pencil sharpeners that operated like machine guns!

Unlike Rock Odyssey, this film thankfully has a DVD release, from Warner Bros.’ fittingly titled “Archive Collection.” It has three possible audio tracks to choose from. You can choose to listen to the theatrical version or “family friendly” version. (Speaking as an admittedly protective father, I wish more films had this option.) Naturally, there’s also a director’s commentary available.

If only a similar bonus feature version on DVD were available for The Thief and the Cobbler!

The Genius of Richard Williams

Don and Frank later explained the troubled history of The Thief and the Cobbler. Briefly, the film was Richard Williams’ pet project for almost three decades before it was “incompleted.” Animator Garrett Gilchrist has suggested that Williams considered Roger Rabbit “just another commercial job” that he took mainly to get the much-needed funds to complete Thief properly for theatrical release. But when Williams was unable to meet the distributor’s deadline, the Completion Bond Company took it away from him, and turned over production to Fred Calvert, who in turn shipped the remaining scenes overseas to Korea.

Regrettably, the “new scenes” were drastically less impressive than Williams’ originally lush vision, animated by the likes of Disney’s Art Babbitt and Warner’s Ken Harris. Additionally, needless voiceovers were cast for the previously mute characters Thief and Cobbler, played by Jonathan Winters and Matthew Broderick (fresh off The Lion King). Perhaps worst of all, “Disney wannabe” songs were added.

Much of this information is available on the fan film edit by Gilchrist, which he referred to as the “Recobbled Cut.” Gilchrist produced his fan DVD version (now widely available in bits and pieces on YouTube) in the hopes that Disney, who now owns distribution rights to the film, would step up and release a long-overdue two-disc version. Sadly, they haven’t yet…

Perhaps, somehow, as they’re likely scouring their “Vault” even now in a rush to compete with Netflix, they’ll run across their dusty footage of The Thief and the Cobbler. And seeing how Generation Xers (like myself) are clamoring for new versions of old favorites (like The Dark Crystal original series)… they’ll give The Thief and the Cobbler the long-awaited restoration it so richly deserves. Here’s hoping! 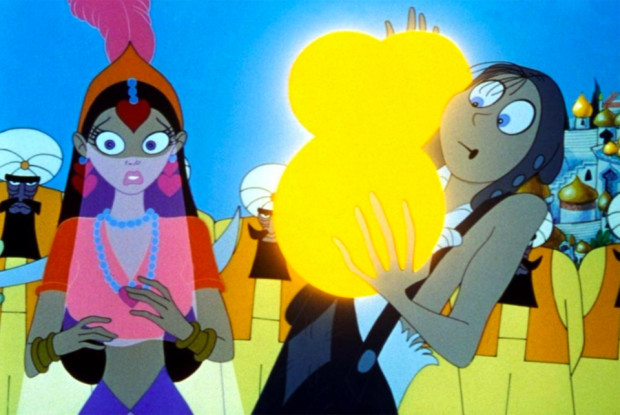 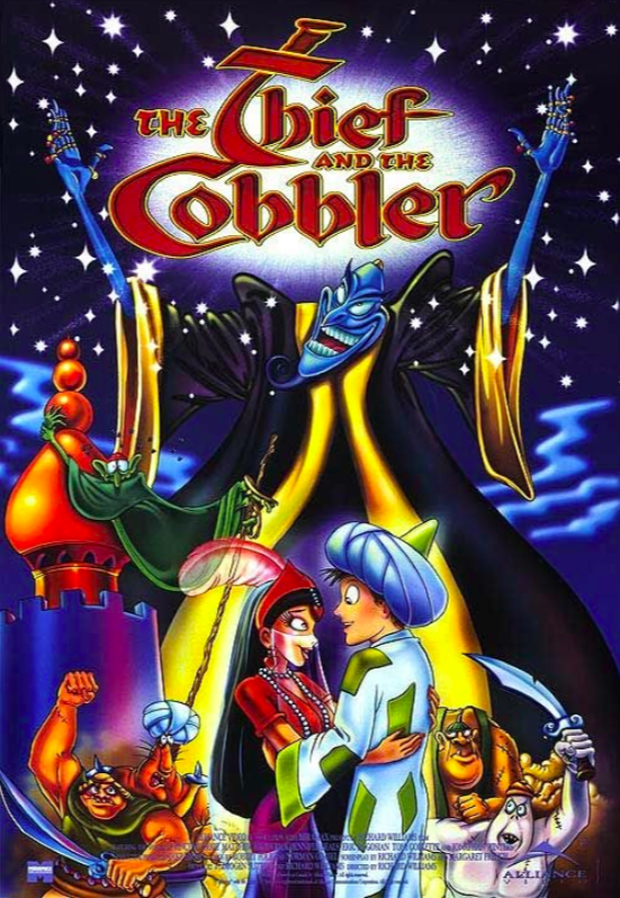 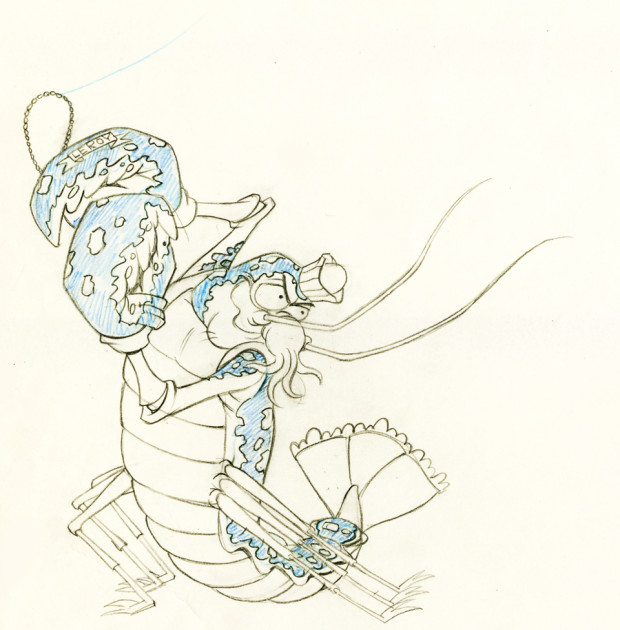 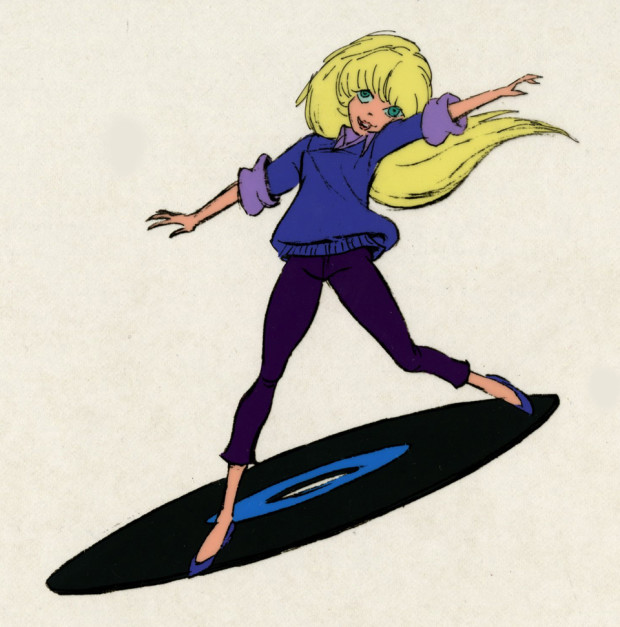 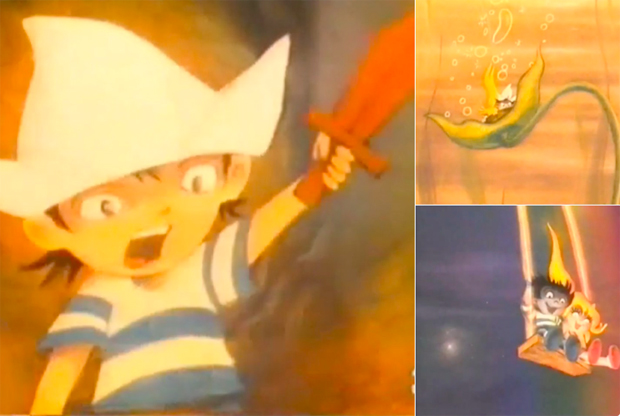 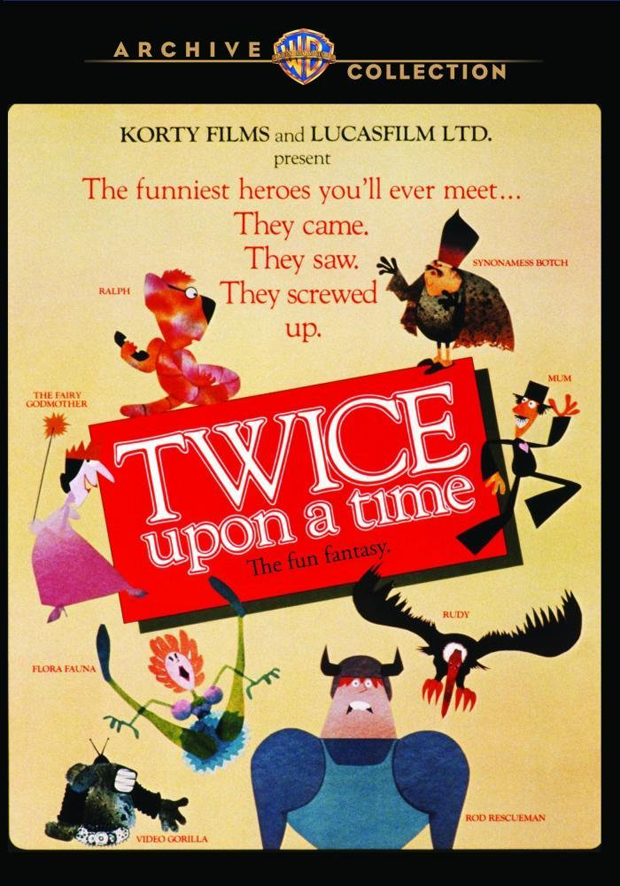 Twice Upon a Time