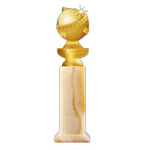 There was no great surprise among the nominees for the Golden Globes’ animated feature film category, which were announced this morning.

Up for the award are:

Additionally, the song “I See the Light” from Tangled was nominated in the best song category.

You may also like...
Related Topics:Despicable Me, Golden Globes, How to Train Your Dragon, Nominations, Tangled, The Illusionist, Toy Story 3