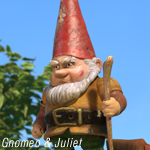 It was a crowded and uplifting weekend at the box office, which heralded a solid opening for the star-crossed lovers of Gnomeo & Juliet, even though the animated feature didn’t top the field.

The Adam Sandler-Jennifer Aniston comedy Just Go With It squeeked into the top spot with a $31 million opening weekend. Just a hair behind it was the concert documentary Justin Beiber: Never Say Never.

Gnomeo & Juliet landed in third place with a $25.5 million opening, handily beating out the weekend’s fourth newcomer, the action film The Eagle, which earned only $8.6 million.

Box Office Mojo reports that Gnomeo’s opening is the largest for an animated feature in January or February, beating out the $16.8 million earned by Coraline on its opening in 2009. It’s also the biggest ever opening for an independent animated feature.

Gnomeo & Juliet also breaks a long drought of new animated movies, though several holiday holdovers are still out there. Among them are Disney’s Tangled, which has grossed $193 million domestic and an impressive $310 million foreign for a total of just over the half-billion mark at $503 million.

And Sylvain Chomet’s The Illusionist earned $321,000 this weekend at just over 200 cinemas. The film — one of three nominated for the Best Animated Feature Oscar — has earned a total of $1.2 million domestic and $2.8 million foreign for a global total of $4 million.