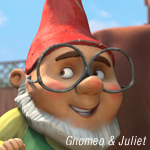 Animation is back at the box office with the opening this week of the first major animated feature film of the year.

Details on the making of Gnomeo & Juliet can be found in Animation Magazine No. 209 — subscribe now to make sure you don’t miss an issue!

Gnomeo goes up against the period action film The Eagle, set for 2,150 theaters; romantic comedy Just Go With It, at more than 3,500 cinemas; and the musical documentary Justin Bieber: Never Say Never, hitting 3,000 moviegoing locations.

Also arriving in about 100 theaters this weekend is Shorts International’s annual presentation of the Oscar-nominated short films. The program is available in both the animated and live-action versions. Find a participating theater near you at http://www.shortshd.com/theoscarshorts/.