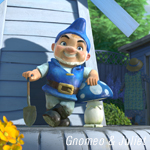 Gnomeo & Juliet held up well its second weekend at the box office, landing in third place with an estimated $19.2 million in ticket sales.

The CG-animated film just barely missed out on second place, which went to the sci-fi action film I Am Number 4 with $19.4 million. Leading the week was the thriller film Unknown with $21 million.

Gnomeo has so far grossed $55.8 million in domestic ticket sales and about $12 million overseas. The film is performing very well for an independent animated feature, especially with overall box office for the four-day President’s Day weekend was down about 28 percent over last year.

Oscar-nominated feature The Illusionist, meanwhile, has so far sold $1.5 million worth of tickets in the U.S. and $2.9 million overseas. And Paul and Sandra Fierlinger’s My Dog Tulip has earned $208,000 to date.