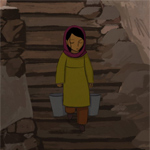 GKIDS has unveiled the first teaser trailer for The Breadwinner — the third theatrical feature from Oscar nominated studio Cartoon Saloon, directed by Nora Twomey (co-director, The Secret of Kells). Based on the award-winning, best-selling young adult novel by Deborah Ellis, the film marks GKIDS’ first foray into producing and financing animated features, in addition to distribution. The Breadwinner is due in theaters this fall.

Scroll down to check out the first teaser trailer.

The movie centers on a young girl named Parvana, living under the Taliban regime, who cuts her hair and disguises herself as a boy in order to provide for her family after her father is imprisoned. This riveting story of imagination and self-empowerment is being rendered in the eyecatching hand-drawn animation that has won Cartoon Saloon so much international respect for Kells and Song of the Sea.

“I am proud to be a part of this beautiful film with this timely and very important subject matter. Millions of girls around the world have to grow up before their time, working to provide for their families at a very young age and in difficult circumstances. They have the strength to do what no one should ask little girls to do. I hope this film is able to bring this discussion to a broader audience,” said Jolie. “As much as it is an important and very meaningful film, it also stands on its own as a great piece of art. Director Nora Twomey and her team have done something very special. They have breathed life into the characters and paid respect to the subject matter and to a country where women often struggle.”

An Ireland-Canada-Luxembourg co-production, The Breadwinner is being produced with the participation of Telefilm Canada & The Film Fund, the Irish Film Board, Film Fund Luxembourg, The Harold Greenberg Fund, Shaw Rocket Fund, the Ontario Media Development Corporation and the Broadcasting Authority of Ireland along with Gaia Entertainment and the Artemis Rising Foundation.

Deborah Ellis’ The Breadwinner novel (Groundwood Books) has been in print for over 15 years, and is recommended reading for many schools in North America and Europe. The title was recently endorsed by Nobel Prize Laureate Malala Yousafzai. The author recently completed My Name Is Parvana, the fourth book in the series which has sold more than 2.5 million copies in 25 languages. Ellis has donated more than $1 million in book royalties to Canadian Women for Women in Afghanistan.