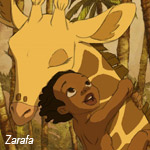 Indie U.S. distributor GKids has picked up rights to the French animated features The Rabbi’s Cat and Zarafa, according to Variety.

The announcements come on the eve of the Annecy Animation Film Festival and at the end of the debut, limited-release weekend for the Oscar-nominated feature A Cat in Paris.

The Rabbi’s Cat is adapted from the graphic novel by Joann Sfar, who directed the film and was producer along with Antoine Delesvaux through their Autochenille Productions shingle. Honored at last year’s Annecy festival with the Annecy Crystal, the movie is about a cat whose owner is a rabbi’s daughter in 1920s Algiers. The movie also won a Gallic Cesar award, the trade reports.

Zarafa is in this year’s Annecy competition, and is inspired by a true story about an Egyptian boy and a baby giraffe who travel from Sudan to Paris in 1824. Directed by Remi Bezancon and Jean-Christophe Lie and produced by Prima Linea, the film premiered at the Berlin Film Festival, the trade reports.