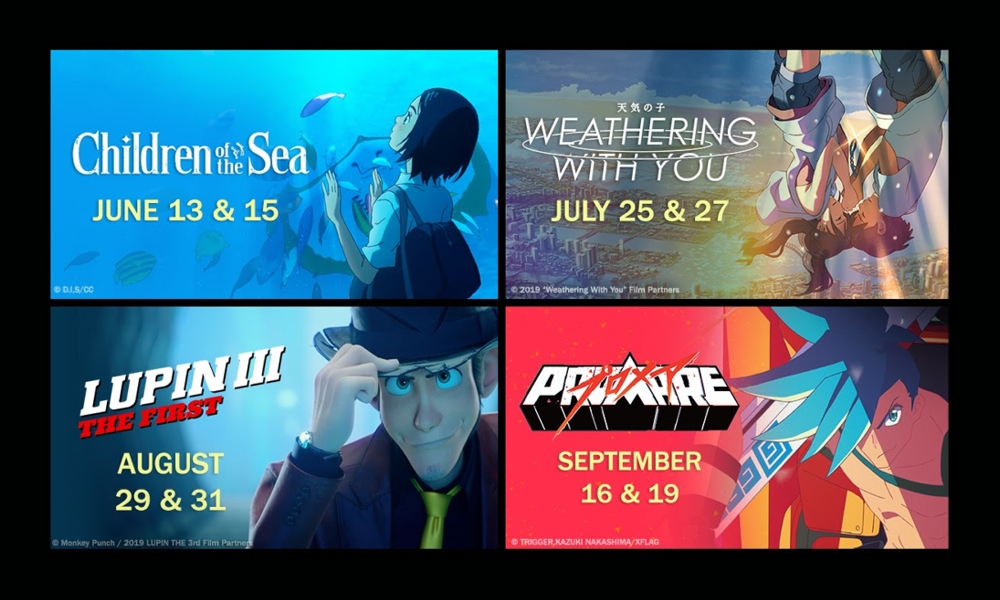 Calling “do-overs” on a year of cinema restrictions, GKIDS has again partnered with Fathom Events to bring a series of fan-favorite animated features from Japan back to U.S. theaters: Children of the Sea, Weathering With You, Lupin III: The First and Promare.

Each event will be shown in both original Japanese and English dubbed versions, and will include exclusive bonus content. Promare, Weathering With You and Lupin III: The First events will additionally be available in 4DX, the immersive multi-sensory cinematic experience, at select locations across the country.

“We’ve listened to fans, and are excited to be partnering once again with GKIDS to bring these iconic titles back to theaters,” said Ray Nutt, CEO at Fathom Events.

“We are so excited for this opportunity for fans both new and returning to see these modern animated masterpieces on the big screen,” said GKIDS’ President, David Jesteadt.

Kicking off the series is the 2020 animated tour-de-force from Studio 4°C (Tekkonkinkreet, MFKZ, Mind Game), Children of the Sea. Directed by Ayumu Watanabe, with a score by award-winning composer and longtime Studio Ghibli collaborator Joe Hisaishi (Spirited Away, Howl’s Moving Castle, My Neighbor Totoro), the film is adapted from the manga of the same name by author Daisuke Igarashi.

Up next in the series is the critically acclaimed Weathering With You, from director Makoto Shinkai and producer Genki Kawamura, creators of the global smash hit Your Name. Featuring music from the hit band RADWIMPS, and backed by an all-star voice cast including Lee Pace (Guardians of the Galaxy, The Hobbit Trilogy), Alison Brie (GLOW, The LEGO Movie franchise) and Riz Ahmed (Rogue One: A Star Wars Story, Venom), Shinkai has once again brought incredible beauty and a powerful story to the screen.

Following Weathering With You, one of the most influential characters in anime returns to the big screen with Lupin III: The First. The “Lupin the 3rd” franchise, from original creator Monkey Punch, began in 1967 and has spanned a variety of manga, TV, game, theme park ride, and musical adaptations, including The Castle of Cagliostro (1979), the feature film debut from the acclaimed director Hayao Miyazaki. Directed by Takashi Yamazaki, Lupin III: The First marks the storied character’s first adventure in CG.

Closing out the series is the hyperkinetic, candy-colored visual masterpiece, Promare. The first feature film from fan favorite Studio TRIGGER, creators of the series KILL la KILL, Little Witch Academia and B.N.A., the film is directed by Hiroyuki Imaishi (GURREN LAGANN), and features a blistering score from Hiroyuki Sawano (Attack on Titan).

Tickets for all events can be purchased online beginning Friday, May 14 by visiting gkids.com/events, or at participating theater box offices. The ticket on-sale date may vary based on local cinema re-openings, so please check back often. (Theaters and participants are subject to change).