GKIDS has picked up North American distribution rights to acclaimed cartoonist Dash Shaw’s feature animation debut, My Entire High School Sinking into the Sea (2016). The American indie comedy will see a theatrical release in late spring 2017, on the heels of strong audience and critic response at TIFF, New York Film Festival, AFI Fest and Fantastic Fest, among others. The deal was negotiated between Linzee Troubh for Cinetic and Eric Beckman for GKIDS.

Shaw said of the deal: “”I’m so psyched to join the GKIDS slate alongside all the awesome Studio Ghibli movies and forward-thinking animations! Yes!”

“When we first saw this audacious genre-bending film, we had grins plastered on our face from start to finish,” said David Jesteadt, GKIDS’ SVP of Distribution. “In a time when it seems like we could all use a laugh, we are proud to play a part in bringing such a unique vision and sweetly funny film to audiences nationwide.”

My Entire High School Sinking into the Sea is equal parts disaster cinema, high school comedy and blockbuster satire, told through a dream-like mixed media animation style that incorporates drawings, paintings and collage. Dash (Jason Schwartzman) and his best friend Assaf (Reggie Watts) are preparing for another year at Tides High School muckraking on behalf of their widely-distributed but little-read school newspaper, edited by their friend Verti (Maya Rudolph). But just when a blossoming relationship between Assaf and Verti threatens to destroy the boys’ friendship, Dash learns of the administration’s cover-up that puts all the students in danger. As disaster erupts and the friends race to escape through the roof of the school, they are joined by a popular know-it-all (Lena Dunham) and a lunch lady (Susan Sarandon) who is much more than meets the eye. But even as the film piles on brilliant details like a post-apocalyptic cult formed by jocks, video game homages, and an infectious synth soundtrack, it never loses sight of the characters at the heart of the story.

Hailed as “the most original animated film of the year” and “John Hughes for the Adult Swim generation” (Indiewire), the film’s everyday concerns of friendships, cliques and young love remind us how the high school experience continues to shape who we become, even in the most unusual of circumstances. 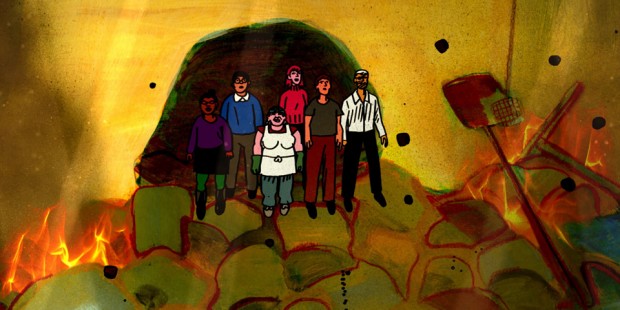