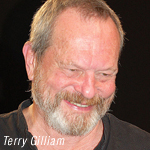 Tim Ollive is directing the picture, with Gilliam – who began by animating sequences for the classic comedy series Monty Python’s Flying Circus — serving as a creative adviser. The pair’s working relationship dates back to Monty Python features such as The LIfe of Brian and The Meaning of Life.

The film will be produced by Steam Driven Films in the United Kingdom and 2d3D Animations in France and is budgeted at about $8 million.

Here’s a look at an animation test for the picture: