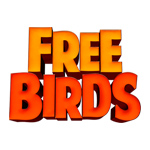 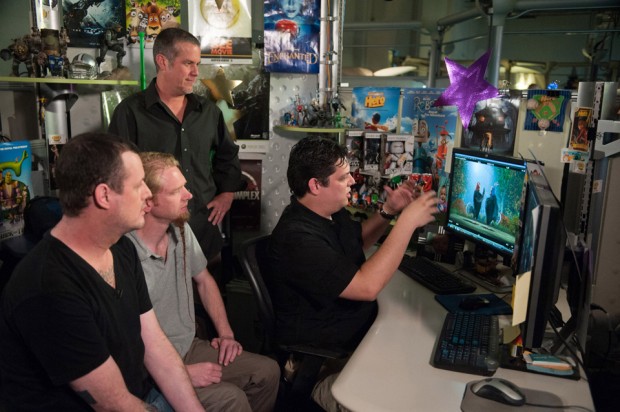 Take two turkeys, one of them cautious and uncharacteristically smart (turkeys aren’t known for their IQs) and the other as dumb as a wet sack of feed, but dauntless; add a layer of sci-fi time travel and bake it into a life-or-death mission to alter the course of history, basting frequently with slapstick. What you have is the recipe for Free Birds, a wild animated comedy-adventure that is the first signature production to come from Santa Monica, California-based Reel FX Creative Studios.

With its 350-member-strong digital effects and animation production facility in Dallas, Texas, Reel FX is no stranger to feature tooning. It has produced, among other things, animation for Sony’s Open Season 2 and 3. “My experience with Reel FX prior to this was having them do consumer products work for Shrek,” says Aron Warner, co-producer of Shrek and now Reel FX’s president of animation and co-exec producer of the film. “I will never forget the first time we saw the work from them. I thought, ‘Wow, I don’t want to tell anyone how good it is!'”

Free Birds follows the misadventures a glib, blue-headed gobbler named Reggie (voiced by Owen Wilson) who has been selected for the yearly symbolic Thanksgiving turkey pardoning by the U.S. President. Pizza-scarfing Reggie lives a life of luxury until he confronts Jake (Woody Harrelson), a red-headed, gallinaceous Rambo, whose mission as the leader of the Turkey Freedom Front is to go back in time to the first Thanksgiving and keep turkey off the menu forever. Using a secret government time machine called S.T.E.V.E. (voiced by the reigning king of all media, George Takei), the feathered odd couple journey to 1621 America, where they encounter a fierce Myles Standish (Colm Meaney), who is determined to be the father of the First Feast, and a resourceful hen named Jenny (Amy Poehler), who is equally determined to save her fellow birds. Ultimately, Reggie is thrust into the reluctant hero role.

What drives Free Birds is the comic interaction of Reggie and Jake, and a lot of care was taken to make sure their relationship worked. “We always talked about Midnight Run and we had a bunch of buddy movies we would talk about,” says producer and co-screenwriter Scott Mosier, whose background heretofore has been in live action, often with Kevin Smith. “You have to ride that line where the tension between them not being friends is always present, and that’s what keeps the back-and-forth going.”

“Scott [Mosier] and I were creatively joined at the hip. We wrote together, devised stuff together, went through everything together. We were like Bert and Ernie.” — Director and co-writer Jimmy Hayward

Director Jimmy Hayward (Horton Hears a Who), who co-wrote the script with Mosier from a story by David I. Stern and John J. Strauss, had a rule for guiding the turkey team through their motions. “Reggie’s mind moves faster than his body, and Jake’s body moves faster than his mind,” Hayward says. “There’s also the rule that Jake fails upward, and it infuriates Reggie, and then we poke [Reggie] in the eye, and everybody laughs at the smart guy who thinks he’s better than everyone else.”

Hayward notes that he and Mosier were no less of a team during the making of the film. “Scott and I were creatively joined at the hip,” he says. “We wrote together, devised stuff together, went through everything together. We were like Bert and Ernie.” (For the record, Hayward also provides the familiar-sounding voice of the President.)

Given its cast of birds, feather rendering was a key element, but so was making sure the texturing didn’t get in the way of the shtick. “We wanted to have a strong sense of realism,” says Scott Peterson, the film’s co-digital supervisor, “but we knew that we were really going to push the characters and their rigs and their posture. We used a system in which we had a polygon representation of each feather that actually turned out to look so well that we were able to use it as part of our level of detail system later. So when the turkeys are far away from the camera, we’re actually only rendering the polygons instead of the full feathers and quills.”

One unexpected challenge was the suddenly growing cast of turkeys as the film progressed. “It was a big surprise how much crowds developed,” notes supervising animator Rich McKain. “We came up with a way to have three types of male turkeys and three female, and by swapping facial poses and colors and sizes, they could generate enough distinctive turkeys.”

“These films live or die on their worldwide release, so we started doing research on how much people know about Thanksgiving elsewhere. It turns out everybody knows about Thanksgiving and turkey.” — Aron Warner, president of animation, Reel FX

Free Birds was initially slated for a 2014 release but was moved up a year by distributor Relativity Media to fill an opening created by the postponement of DreamWorks’ Mr. Peabody and Sherman (another film about a duo traveling through time, coincidentally). While its November 1 release date makes perfect sense in America, the filmmakers worried about whether the rest of the world would get it. “These films live or die on their worldwide release,” says Warner, “so we started doing research on how much people know about Thanksgiving elsewhere. It turns out everybody knows about Thanksgiving and turkey.”

What is more surprising is that putting the film out a year early did not wreak havoc with the production schedule. “We were always scheduled to finish at the same time,” says Warner. “The question was really more could we get the marketing side of it together in time.” The speed of production––it took only one year––was facilitated by reliance on live-action video reference footage, which was acted out by the animators themselves, according to McKain. “Video reference became mandatory on this film,” he states. “It allows the animator to experiment more and find the shot much faster than they would using traditional blocking, or sketching out a shot. Jimmy could see the acting choices in an animator’s video reference. Honestly, I don’t think we could have got as far as we did, as fast as we did, without that.”

One other innovation saved on storage space, if not time: the creation of “recipes” for sets that could generate settings when required instead of having the digital sets permanently established and stored. “We did not actually carry the set wave around, we just carried around this recipe, which built it on the fly,” says Peterson.

Next Stop: Day of the Dead

Budgeted somewhere in the $50-70 million range Free Birds is the first of a slate of films coming from the company. Next up is Book of Life (which was actually pitched prior to Free Birds), which is set against the Mexican “Day of the Dead” celebration and scheduled for release next year through Fox Animation. Die-hard toon fans have high hopes for that movie as well since it’s produced by Guillermo del Toro and directed and written by Emmy-winning artist Jorge Gutierrez (Nickelodeon’s El Tigre: The Adventures of Manny Rivera). The plot is described as a Romeo and Juliet-type story set against the famous Mexican holiday.

In chrysalizing from a service house into a production studio, the 20-year-old Reel FX has attained an air of newness that is attracting both veteran and first-time animators. “One of the things that appealed to me was the opportunity of being on the ground floor of a new studio being born,” says McKain, who relocated from Pixar. “It had this perfect storm of entities that were already established coming in. There was secured funding, an experienced director, this fast and efficient pipeline and infrastructure that Reel FX had developed over the last 15 or 20 years. But we knew that for most of the movie-going audience this film would be our first impression, so we wanted to make it as good as we could.”