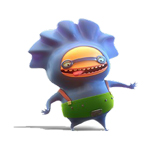 An agreement between East and West which will see the development and production of an appetizing new animated comedy feature has been announced from Cannes. China’s Huawen Pictures and Gravity Pictures have partnered with Berlin- and L.A.-based MovieBrats Pictures for the project, Variety details.

The project was recently pitched at Animation Production Day in Stuttgart, with MovieBrats and production partner Gravity presenting.

The Dumpling Queen will tap into the universal language of food as it relates the action-packed, empowering story of a girl as she takes over the family dumpling restaurant from her father. In the process of finding her place in the world, she must learn to cook from the heart after losing track of the magic recipe that was supposed to help fend off her wicked uncle.

MovieBrats Studios in Berlin is currently a work on the visual development. The animation production work for The Dumpling Queen will be shared with a studio in China.

The film is been written by US screenwriter Raven Burnett from an original story by Burnett, Alexander Weimer and Tobias Trebeljahr. Weimar and Esther Friedrich will serve as producers for MovieBrats, with Gravity’s Wayne Wei Jiang and Huawen’s Liu Yiwei as executive producers.