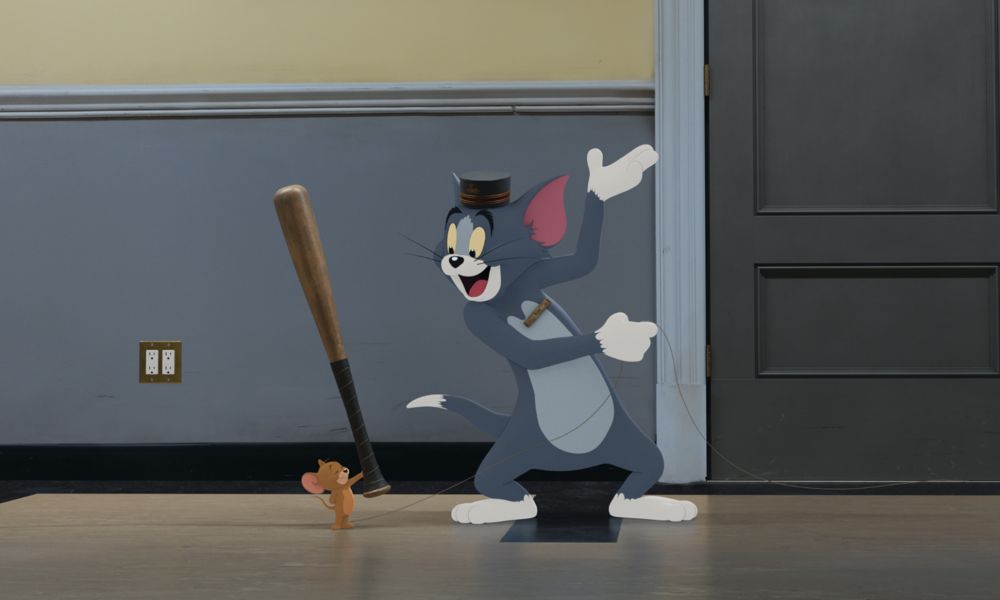 It’s hard to believe that Hanna-Barbera’s eternal cat-and-mouse frenemies will be turning 81 this year. With 164 shorts, nine TV series (original and packaged), three specials and 14 movies on their resume, Tom and Jerry are now wreaking havoc in their own Warner Bros. hybrid feature this month.

The high-energy romp is directed by Tim Story (Fantastic Four, Barbershop, Ride Along), produced by Chris DeFaria (The LEGO Movie 2, Gravity), with a script by Kevin Costello (Brigsby Bear) and stars the likes of Chloë Grace Moretz, Michael Peña, Rob Delaney, Colin Jost, Ken Jeong and Pallavi Sharda. The plot finds Tom being hired at a fancy New York City hotel to stop Jerry from wrecking a high-profile wedding. The two soon band together to stop a staffer who’s scheming against both of them.

“I was introduced to the project in the fall of 2018,” recalls Story during a recent phone interview. “I grew up on Tom and Jerry cartoons, and I could immediately rattle off my favorite episodes off the top of my head. I knew exactly which versions and which situations would work for a modern movie.” 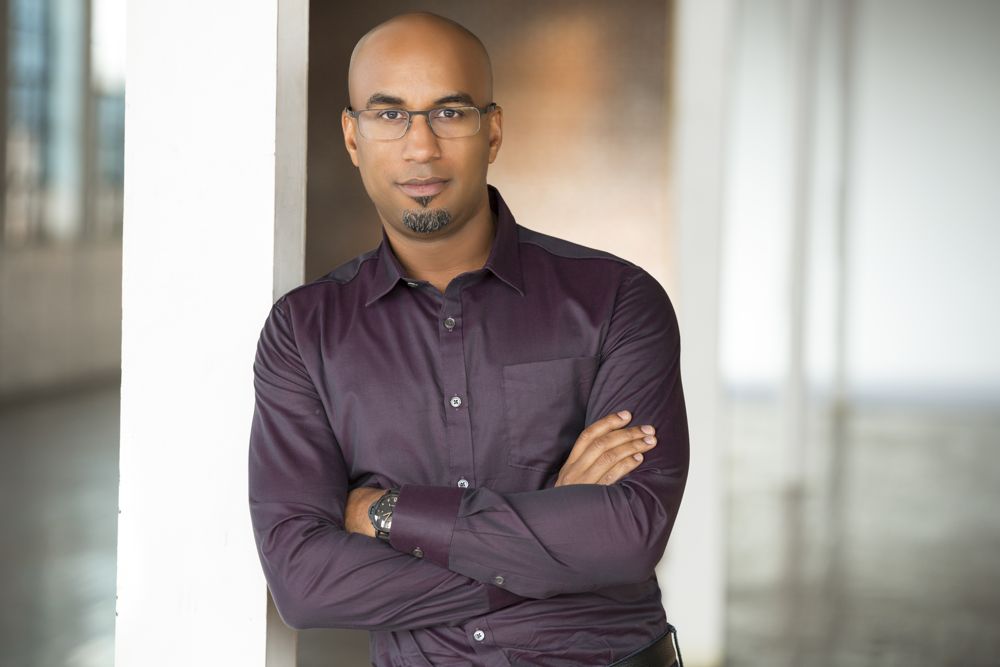 Story says the duo’s wild energy level and constant mayhem is hard to resist both for young kids and older audiences. “I remember watching those cartoons and then taking the chairs in our house and making forts with blankets. I have a young son who used to do that all the time, too. Tom and Jerry were destroying their house on a regular basis. We just love to watch them chase each other around and cause trouble.”

The director says it was very important for him and his team to be true to the original spirit of the characters. “I knew I could capture that spirit and bring it into the modern day because I know the cartoons so well,” he explains. “We have seen Tom and Jerry destroy a home, so you want to go beyond the square footage of a home. You have a big hotel, and you have the real estate to have these characters really engage the audience. By being in New York, we had this larger canvas to pain on. We have 90 minutes and we could have this metropolis as our playing field for their destruction!” 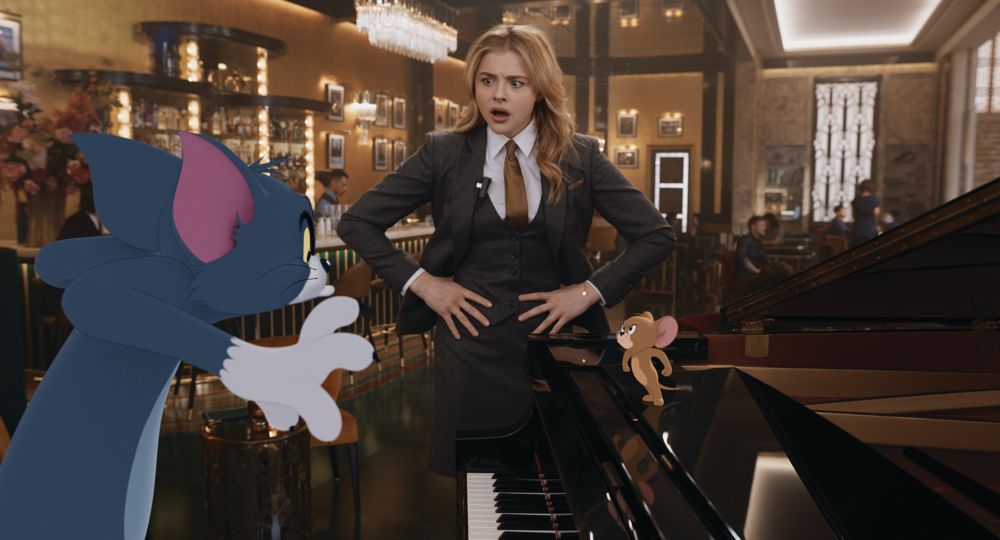 One of the filmmakers’ go-to references for making a successful live-action/cartoon hybrid was Robert Zemeckis’s 1988 classic Who Framed Roger Rabbit. “That movie was one of our main inspirations,” says Story. “We made it hard on ourselves because we wanted a lot of interaction between the animated characters and the live-action world. We wanted to engage fully with the environment. What’s fun about doing hybrid movies is trying to connect the tones, since animated characters have a different set of rules to live by. For example, they can’t die and there are certain things they can do that can’t be carried out in the human world. We had to make sure those two sets of rules co-existed.”

Story and his team tried to avoid looking at examples that had 3D CG characters sharing the screen with live-action actors. “I didn’t want that, because we wanted to go for a 2D-plus look. We didn’t want to have a ‘real’ CG cat and mouse in the human world. All the animals in our movie are cartoony and animated,” he explains.

The film’s animation director Michael Eames, agrees. “Tim definitely favored Tom and Jerry as they appear in the first Hannah-Barbera shorts of the ’40s and ’50s, but he wanted to explore how we could bring that 2D spirit into a real-world modern environment. Accepting these would be computer generated three dimensional characters, he was keen to see what would happen if we mixed it up a little.” 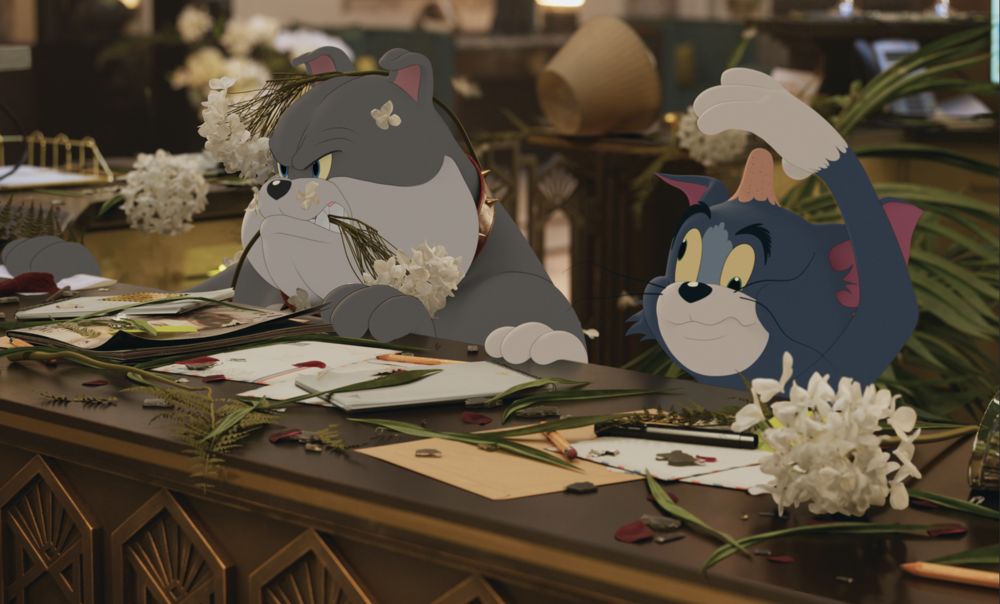 To that end, Eames and his team at Framestore in London and Montreal (Tom and Jerry had a crew of roughly 700, including about 100 animators) experimented with different levels of texture, shaders, lighting levels and interactivity. They even explored how they could incorporate automated/drawn lines as an integral ingredient of their original look and feel. “In animation, we looked for a balance where we could lean heavily into the original 2D style but still allow the 3D form of the characters to work seamlessly with real-world, often moving, cameras,” explains Eames, whose many animation supe credits include Christopher Robin, Where the Wild Things Are and Children of Men.

“The resulting final treatment is different to anything I’ve come across before,” he adds.  “Hopefully, we’ve come up with a way of presenting appealing characters rooted in the original style but fully integrated with our live-action cast and real-world environment. I do believe the movie has successfully brought Tom and Jerry into the present whilst at the same time paying homage to the charm and appeal of the original Hannah-Barbara characters.”

Eames points out that the project’s demands for the animation style were incredibly high, favoring a much more traditional approach than many VFX animators are used to. “The team worked really hard to evoke the spirit of the original shorts, researching and incorporating the particular Tom and Jerry style into their animation,” he notes. “We developed new rigs that enabled us to squash, stretch and at times totally deform the characters. We changed our workflow to include a 2D draw-over phase to enable us to refine and better sculpt shapes we were not able to fully achieve in the animation process. Our software team amazingly developed an automated line generation tool to provide a 2D drawn feel to every single character frame.” 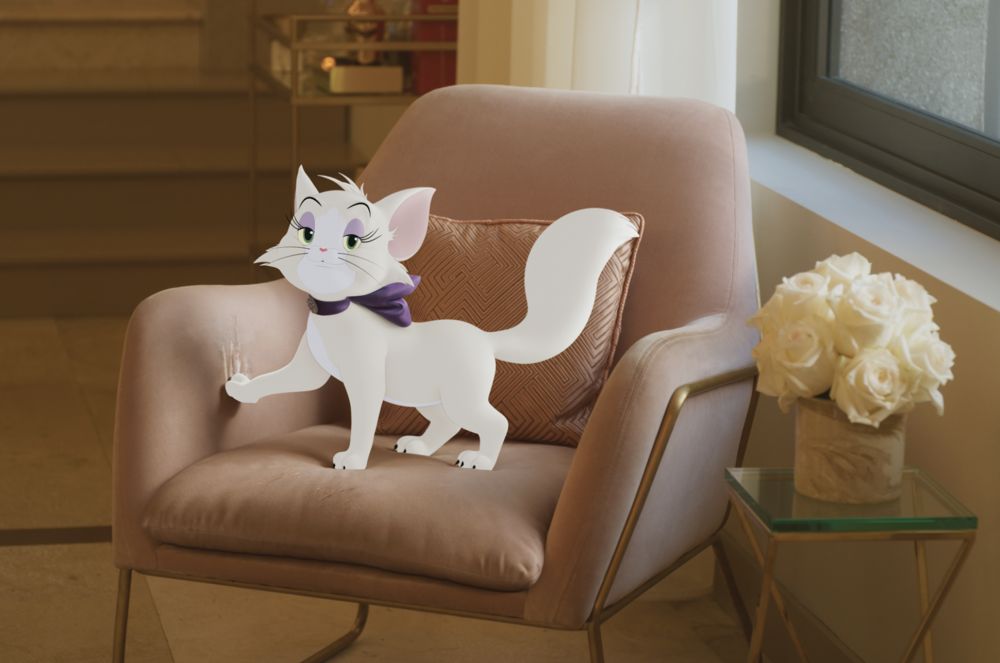 Visual effects supervisor Frazer Churchill also joined the project back in October of 2018.

“I came up with an idea, a series of shots in which Tom is playing the keyboard and Jerry sneaks up on him and ruins his playing,” he recalls. “In subsequently working on it with Framestore, we learned a lot about our approach to the movie and the look and development of the characters were really determined during this testing period.”

Churchill, whose credits include Wonder Woman, Children of Men and Scott Pilgrim vs. the World, says he found it quite interesting to bring such iconic characters back to life and find a modern context for them. “All the senior creatives on the film are old enough to remember watching Tom and Jerry on the TV as kids and we all love them and have an innate understanding of their world,” he points out. “We tried very hard to find places to use classic Tom and Jerry objects — ‘Can we use an anvil here?’ and ‘This would be a great place for a frying pan gag’ — as well as using objects from the modern world, like smartphones and drones. It was great doing a project that involved so much animation. Dreaming up gags and creative cartoon violence was a great source of fun!” 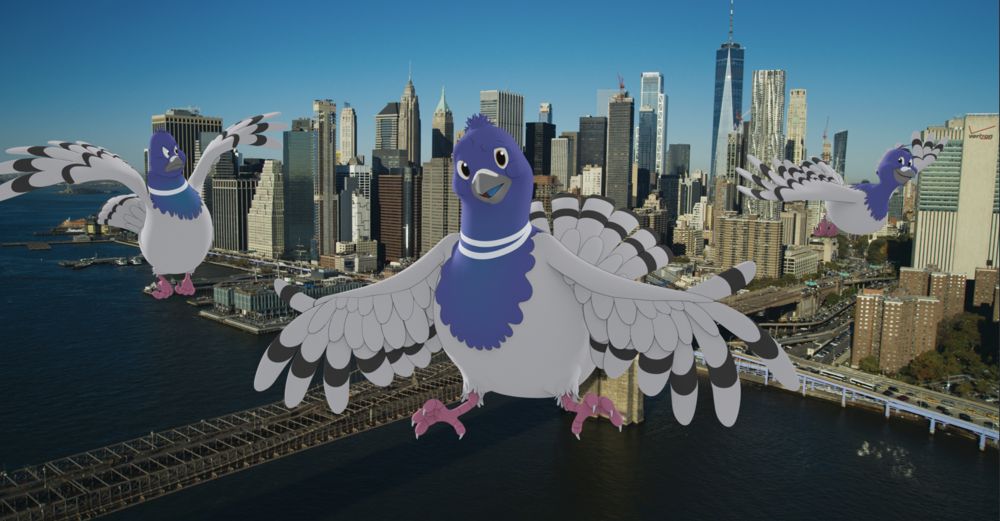 A key challenge was recreating the film’s New York City setting in Warner Bros.’ Leavesden Studios in the U.K., with a couple of days of photography in Battersea Park. “It was a challenge to have the movie believably set in New York, but I spent a week there working with a small unit to get background plates, Framestore and our in-house team did a great job of believably crafting New York exterior scenes from the New York plate photography and digital stills,” says Churchill.

“Finding the overall aesthetic was also a big challenge,” he adds. “We knew that we wanted Tom and Jerry to retain their classic look from their Golden Era of the 1950s and early `60s but fit into a contemporary movie environment. They and all the other animals in the movie would be cartoons whilst everything else in the movie, including all the objects they interact with, would be photoreal.”

Among the demanding aspects of the project was to have Tom and Jerry interact with photoreal objects. “There’s a scene in which Jerry drops into a cake and is covered in [photoreal] icing,” Churchill mentions. “The cartoon elephants at the wedding have intricately decorative blankets over them. Mixing cartoon characters with photoreal objects was a big challenge we had to solve, and Framestore’s lighting & look-dev team did a great job of mixing these two looks.” 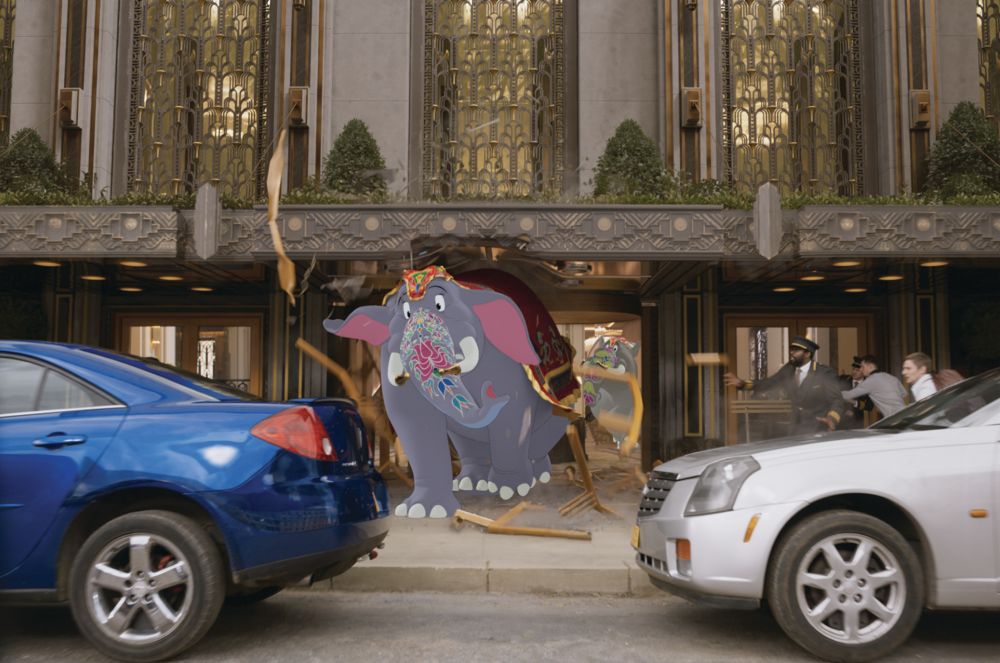 Fans can also look forward to a terrific chase sequence toward the end of the movie where Tom and Jerry race through the streets of New York on a motorized skateboard. “This involved multiple camera array photography on the streets of New York, some seat-of-the-pants flying from our N.Y. aerial unit, an action unit working on the Leavesden backlot and some incredible environment work from the Framestore team,” notes Churchill. “I’m very proud of the end result, our cartoon characters really live in this action sequence and people are convinced we shot the movie in New York.”

All the restrictions brought about last year by the COVID pandemic also added new complications to the film’s production plans. “I was in London from March until the end of June, and then I moved back to L.A and did everything remotely. I remember I was on my way to do a testing in Los Angeles when my flight got cancelled,” recalls Story. “We had to switch gears early on and become a remotely posted film. I have to applaud what the team at Framestore was able to pull off. We found our footing quickly.”

Now that the movie is in the can, Story says he has loved this opportunity to bring these beloved animated characters to life in a contemporary world. “I think we delivered whatever audiences thought a new feature film with Tom and Jerry would be like and look like,” he concludes. “I believe the spirit of the original cartoon lives and breathes in the film. I am excited that audiences will be able to see Tom and Jerry destroy stuff like they did in the old cartoons!”

Warner Bros. premieres Tom and Jerry on HBO Max and in select theaters nationwide on February 26. 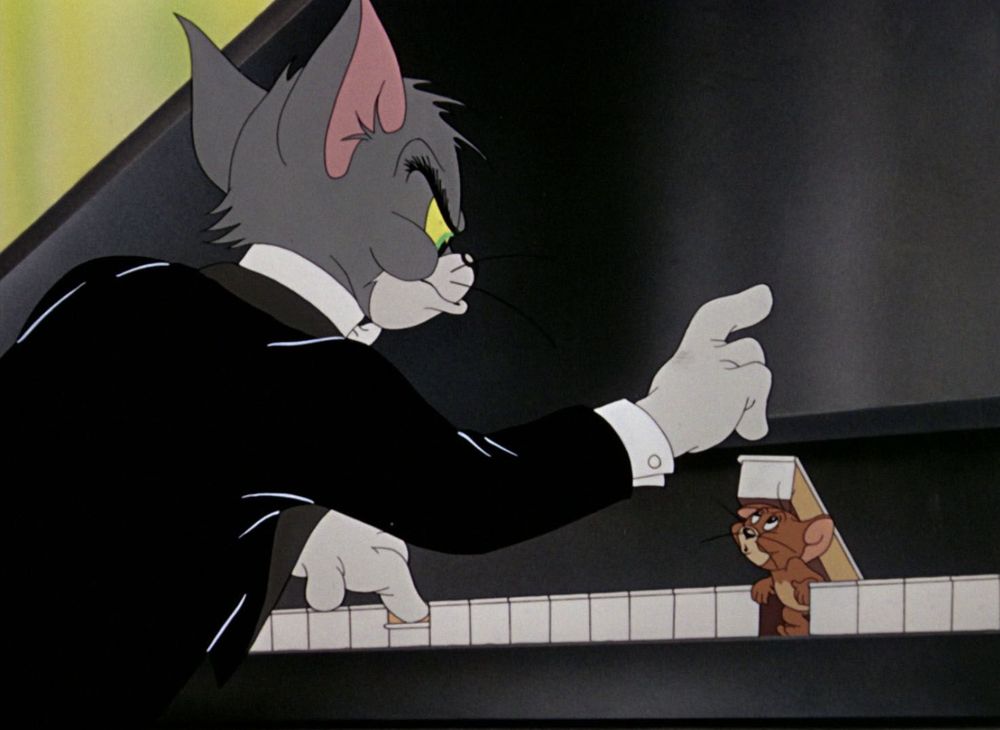 Director Tim Story and his animation team pay homage to some of the cartoon duo’s greatest hits in the new movie. Among them: