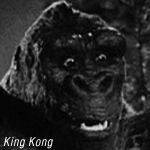 Few things are as perennially popular as King Kong — something Fox is counting on for a new animated project.

The studio has hired up-and-coming writers Christian Magalhaes and Bob Snow to write a modern twist on the classic tale, which will be told from the point of view of the giant ape, according to Deadline.com.

The pair will work from a story by Mike Weber, who will be a producer. The overall production is from Shawn Levy’s 21 Laps and Ted Field’s Radar Pictures.

This isn’t the first time Kong’s been targeted for animation. He’s appeared in a 1966 cartoon series called The King Kong Show and a 2001 series called Kong: The Animated Series.