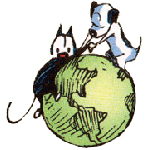 Fox is moving ahead with plans for an animated feature based on the popular newspaper comic strip Mutts, according to The Hollywood Reporter.

Mutts began in 1994 and stars canine Earl and his feline friend Mooch as well as a cast of neighborhood pets, other animals and humans.

The Mutts project was brought in by Fox Animation executive Ralph Millero, The Reporter writes.

No word on whether the film will be done in CG animation or traditional 2D animation.