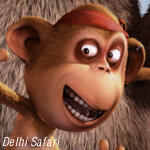 The quartet will join Cary Elwes and Jason Alexander as voice performers in the Fantastic Films project about a leopard cub and his family friends as they set off on a safari to save their home.

Fred deWysocki and Jamie Simone of Fantastic Films are producing the film, which will be directed by Nikhil Advani, the trade reports. The Indian version will premiere later this year with a Hindi-language cast; English version will follow.