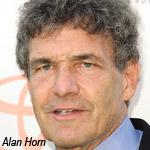 Former Warner Bros. president Alan Horn will take over as chairman of the Walt Disney Studios on June 11.

Horn was tapped by Disney chief Bob Iger to replace Rich Ross, who left the studio in April. Horn was president of Warner Bros. for 12 years before leaving the studio last year.

In his new job, Horn will oversee all Disney operation including production, distribution and marketing for live action and animated films under the Disney, Pixar and Marvel banners.

“I’m incredibly excited about joining the Walt Disney company, one of the most iconic and beloved entertainment companies in the world,” Horn said.” I love the motion picture business and look forward to making a contribution as part of Bob Iger’s team working closely with the dedicated and talented group at the studio.”

During his tenure at WB, Horn oversaw the development and release of the Harry Potter series, as well as Christopher Nolan’s Batman series, Charlie and the Chocolate Factory, Happy Feet, Sherlock Holmes, The Departed and The Matrix sequels.

The choice came amid strong speculation that Marvel Studios chief Kevin Feige or even Disney Animation/Pixar chief John Lasseter might take the job.