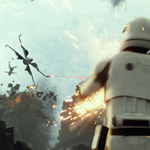 ILM goes back to the beginning to find inspiration for Star Wars: The Force Awakens, the long-awaited next chapter in the beloved saga.

For Star Wars: The Force Awakens, which premiered worldwide Dec. 18 to record box-office results, the approach to making the movie’s visual effects was both simple and complex. Simple in that the movie sought to evoke the emotion, charm and delight that made the original Star Wars trilogy a hit while avoiding the idealistic and epic digital look of the prequel trilogy.

That led to early statements from director J.J. Abrams and his crew that the new Star Wars — the first to take place after the events of 1983’s Return of the Jedi — would emulate the original prequel by taking a more practical approach. While The Force Awakens was shot on film, fans expecting the movie to go all the way back to practical models and optical printers will find that’s not exactly what happened.

“The danger of that sort of thing is it becomes a retro movie, like an homage,” says ILM’s Roger Guyett, visual effects supervisor on the movie, of the idea of using the old techniques. “What we wanted to do is something that had its own sense of excitement and its own feel.”

That means that while the movie was shot on real locations and there were more practical elements to the sets and alien prosthetics, the visual effects used digital tools to recreate the look and feel of the original movies. “By building a lot of the sets and actually visiting the locations, I think it really made it much more tenable to use the more contemporary digital technology,” Guyett says.

Recent advances in lighting and environment tools made it possible to create more realistic and photorealistic digital environments that are almost indistinguishable from the real locations. “In that way, I think, you’re sort of advancing the process so it doesn’t feel like a completely retro movie,” he says. “It has a visceral edge and it has this slightly more contemporary feel to it.”

On the animation front, the key character is Maz Kanata, a former pirate who owns a watering hole for some of the galaxy’s least pleasant denizens. Played via a combination of motion capture and animation by Lupita Nyong’o, Maz is a wizened, shortish alien who brings a Yoda-like element to the movie.

Keeping the character grounded meant Nyong’o was on set with a motion capture rig performing the role alongside actors such as Harrison Ford, Daisy Ridley and John Boyega.

Abrams says having Nyong’o made it possible to explore variations in the character. “It’s kind of an amazing thing to discover over various iterations of Maz what she sounded like, how she moved,” he says. “I’ve never been through this before with an actor, where we got to discover again and again and again how to better tell the story that we were telling.”

Nyong’o, who had help from motion-capture veteran Andy Serkis in overcoming the awkward aspects of wearing a mo-cap rig, says it was very valuable to be on set even if the final performance was finessed later on.

“J.J. had me be a part of principal photography, so my very first experience with motion capture was on the actual sets with the actual actors,” says Nyong’o, adding that shie liked the physicality of this performance. “That was the thing that attracted me to the idea of motion capture — the idea of working on a character that wasn’t limited by my physical circumstances — and I could work with my body in new ways.”

From there, Guyett says the digital version also drew on maquettes of Maz created by a crew headed by Neal Scanlon, head of the practical creatures group.

“The one thing you do get by doing that is you understand how to animate that character as if it was a puppet or if it was an animatronic and what would the surfaces look like,” says Guyett. “If you match something that’s from the real world, then clearly you’re going one step closer to having something that appears to be real because it starts real and you’re matching something back to some version of reality rather than just inventing it completely inside the computer.”

The final performance was hand animated by ILM in London over the motion-capture performance.

The most popular character among the animators was BB-8, who was digital in about a third of his shots. ILM animation supervisor Paul Kavanagh says it was a big advantage to have access to the puppeted version of the droid as they could extract all the reference they needed to make the digital version look and act identically.

“We were working with that performance of BB-8 that was established during the shoot and we wanted to make sure we were very faithful to that puppet,” he says. “We would animate him and we would look at the puppet for reference. And the CG model of him looks so good that now when we look back at shots we go is that the puppet or is that the CG one? You cannot tell.”

Another major animation challenge was the Rathtars, dangerous alien creatures with tentacles that escape their cells and threaten the characters in a purely Star Wars fashion. Kavanagh says the Rathtars were animated by hand, using a trick common to the original trilogy: never allowing the audience a good long look.

It was swooping spaceships that put the original Star Wars on the visual effect map, so it’s no surprise that special attention was paid to how digital versions would move in The Force Awakens.

Guyett says the effects crew started by going back to the source. “Dave Fogler and all the guys that were in charge of building all the assets spent an enormous amount of time up at (ILM’s Skywalker Ranch) going over and photographing and looking at the models that were built and the way that they were used in the movies,” Guyett says. “You can go through all that material and get a really good picture of the kind of the way the surfaces were constructed. It helps you create a Millennium Falcon that you believe is from the era of those movies, from A New Hope or Empire.”

That meant when the digital Millennium Falcon hits the ground or flies low it kicks up a convincing array or sand or dust. It also makes matching up physical effects like on-set explosions with laser bolts and the TIE Fighters that fired them, and helped make it hard for even the crew to tell which BB-8 shots were digital and which were not.

Aiding those shots is ILM’s rebuilt simulation pipeline, which more quickly handled things like the dust kicked up by the Millennium Falcon when it takes off and lead to more realistic results overall, Guyett says.

The Force Awakens also visits several new worlds as its story unfolds, from the deserts of Jakku to Maz’s lakeside castle and the falling light on the icy surface of Starkiller Base. While there was extensive location shooting, ILM used new lighting and rendering tools to extend and even completely recreate those environments for digital shots.

Guyett says the start date was pushed while the script was prepped, meaning ILM knew they would have to be flexible and be able to recreate any of the movie’s environments digitally.

“You can’t just rely upon shooting plates for those kinds of things,” says Guyett. “You have to build up a library of information so that you can just recreate those environments and then go back and do any kind of camera move that you want.”

Basing many of the environments on real places — Abu Dhabi stood in for Jakku; the lake district of England for Maz’s castle; and Iceland for Starkiller Base — gave them a realism lacking in the pure fantasy worlds of the prequels, Guyett says.

“You can actually go to those places and figure out what kind of trees grow there and the kind of environment and all those sorts of things,” he says. “And you can go shoot a bunch of stuff and then build a digital environment and then you can do any camera move that you want to.”

And while there were plenty of locations shoots there also were plenty of purely digital environments. “For example, in the (TIE Fighter) hanger or around Starkiller Base, a lot of the time you’re working with a very, very minimal set,” says Guyett. “When they escape on the TIE Fighter, that’s a completely digital thing — even the stormtroopers are digital.”

The intense secrecy that surrounded the movie had little impact on the visual effects team — such procedures are common with many movies, Guyett says.

In all there were about 2,100 visual effects shots in the movie, with ILM doing about 1,250 of them. Guyett says ILMs four offices each contributed specific elements: London worked on Maz and Supreme Leader Snoke; Vancouver did a lot of work on interior scenes; Singapore worked on the TIE escape scene early in the film; and San Francisco handled the rest, as well as all the asset builds.

With the film finished and released to strong views and more than a little bit of fan rapture, Guyett and Kavanagh both say they think they accomplished what they set out to do.

“We spent a lot of time talking about those kinds of things and the kinds of things we wanted to achieve, and a lot of it revolved around  — you can use words like realism or authenticity or any of these things — but at the end of the day what does that really turn into?” says Guyett. “For us, it really meant capturing the spirit of those (original) movies without it just being a copy or a retro movie.”