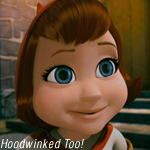 Most of the attention this weekend was on the blazing fast start for Universal’s Fast Five, which had the best opening of the year to date and Universal’s best-ever opening ever with an estimated $80 million in ticket sales.

Fox’s animated feature Rio, however, held on pretty well, taking a distant second place with a solid $14 million in its third weekend of release. That puts the Blue Sky Studios production at $103 million domestic and a whopping $260 million overseas for a very solid worldwide total of $364 million.

The news was far less rosy for Hoodwinked Too!: Hood vs. Evil. The sequel opened in sixth place with a $4.1 million weekend, just behind the $5 million opening for Disney’s live-action teen movie Prom. The news is hardly all bad for The Weinstein Co. release, as Hoodwinked Too!’s production budget of about $30 million gives it a good chance of succeeding financially in the long run.

Nearing the end of its theatrical run is Rango, which is topping out at about $120 million domestic and $117 million overseas for a respectable run of $237 million.