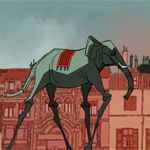 Visitors to the Cannes film festival and market this month will have an opportunity to view the first animated sequences produced for Buñuel in the Labyrinth of the Turtles — an upcoming 2D animated feature from Spain’s The Glow Animation Studio. The footage will screen as part of Animation Day on May 23 at the event, where the film’s subject received so many honors for his works.

Based on the graphic novel by Fermín Solís, Buñuel in the Labyrinth of the Turtles relates the experiences of avant-garde filmmaker Luis Buñuel when he left Paris to film his documentary Land without Bread in direly impoverished Las Hurdes, Spain, in the 1930s. The animated feature is being produced in Extremadura, the same region where the documentary was shot, with Glow’s studio based in Almendralejo.

The film is adapted by Eligio Montero and director Salvador Simó, who makes his feature directing debut after working in visual effects on high-profile international projects such as VFX Oscar winner The Jungle Book, The Chronicles of Narnia and The Prince of Persia. Manuel Cristobal and Jose Fernández de Vega are producing, with Javier Espada as an associate producer and expert on Luis Buñuel.

In addition to being a recurring Official Selection and award winner at Cannes (including Best Director for Los Olvidados in 1951), the festival has named one of its main Salles after Buñuel. The filmmaker, who died in Mexico in 1983, will be remembered with a special screening of a new 4K remaster of Belle de Jour at this year’s festival.