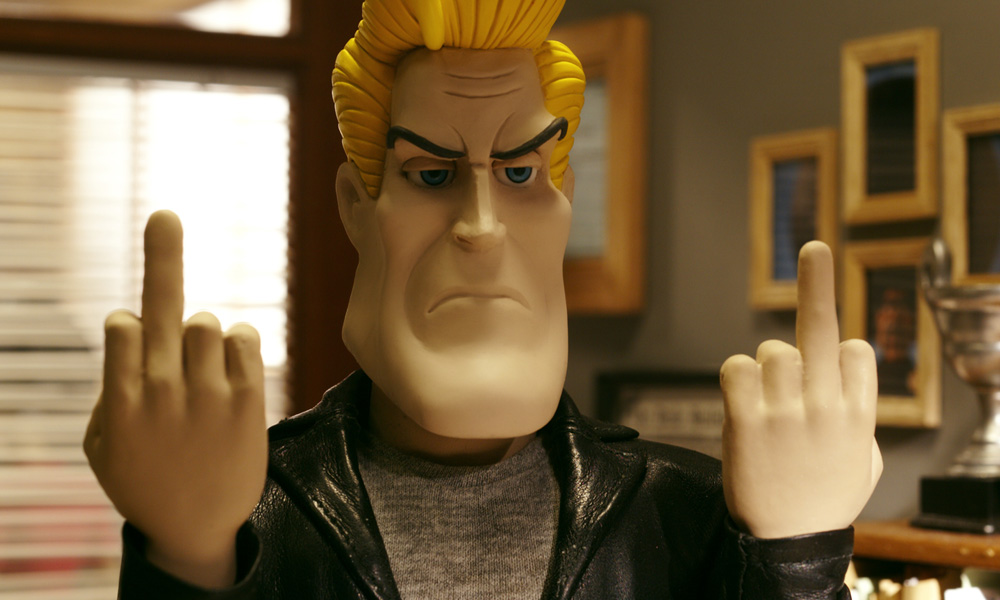 As he prepares to hit U.K. cinemas exclusively from October 29, the punch-happy puppet Chuck Steel has a surprise in store … an even more outrageous trailer for his feature film debut in Chuck Steel: Night of the Trampires. Dropping on the eve of the UK Premiere in London’s Leicester Square (Thursday, Oct. 21), the new spot teases more explosions, punches, blood, laughs and shocks than you can shake your Holy Coffee at.

It’s not 1985 anymore…it’s 1986, and Chuck Steel is ‘the best God damn cop on the force.’ But even this maverick, renegade, loose-cannon, lone wolf, cop on the edge, who doesn’t play by the rules, has his work cut out when he discovers an evil is about to descend on the city of Los Angeles: the scourge of the TRAMPIRES – mutant hybrids of vampire and tramp!

From Animortal Studio and Blue Dolphin Films, Chuck Steel: Night of the Trampires will screen exclusively in theaters across the U.K. (including Showcase, Vue, Cineworld and Odeon cinemas), with a special “Insider Members” preview on Oct. 24 at select Showcase locations. The 90-minute flicks is rated for ages 15 and up.

From the fevered imagination of two-time BAFTA-winning writer/director, Mike Mort (Gogs), and featuring the voices of U.K. comedy legends Jennifer Saunders (Absolutely Fabulous) and Paul Whitehouse (The Fast Show) alongside Mort’s, this homage to ’80s B-movie excess is the first feature from Animortal Studio since it was founded in 2016 by Immortal Pictures and Animatrix.

The Fantasia Gold Audience Award-winning Night of the Trampires was filmed in a 23K sq. ft. repurposed warehouse in Bridgend, Wales, with the ambitious project requiring over 400 puppets to be created. The production team assembled included animators who have worked on international stop-motion hits such as Chicken Run, ParaNorman and Fantastic Mr. Fox. Check out a behind-the-scenes sneak peek here.