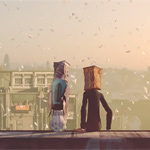 Singapore-based 108 Media and co-production partner Aurora Media Holdings revealed a varied multi-title slate of films at the Hong Kong FILMART, including an animated feature based on award-winning animated short Schirkoa (trailer below).

“Together with 108’s keen market sense, we’re looking at producing a roster of the best Pan-Asian films and talents for both regional and international audiences. These exceptional projects and filmmakers fit the bill. Aurora’s looking forward to bringing them to market and extend creative bridges to buyers, co-producers and platforms in all corners of the content sphere,” said Justin Deimen, Managing Partner of Aurora Media Holdings.

Written and directed by visionary Indian filmmaker Ishan Shukla, Schirkoa tells the story of an intellectually confused bag-head who works as a senator in the dystopian city of Schirkoa where the perceived perfection and sleaze turns him into a suicidal “anomaly,” only to realize there is an alternate bohemian society full of anomalies like him. The feature film is currently in pre-production with a budget of $1.5 million USD. The original 2016 short won several awards around the world, including Best of Show of SIGGRAPH Asia and Best Animated Short Film at the Sydney World Film Festival.

The 108/Aurora slate also includes horror-mystery Eerie (with ABS-CBN’s Star Cinema and Media East Prod.) directed by Mikhail Red (Birdshot); and multicultural and intergenerational creature-feature Mogwai, directed by Alejandro Suarez Lozano and based on his multi-award-winning short film The Fisherman.

Abhi Rastogi, CEO of 108 Media, said: “We are very excited to bring these new projects to our already robust slate with Asian media powerhouse Aurora Media. Strong partnerships like these will help us transform the media landscape and give a voice to the visionary creators involved.“

108 Media (www.108world.co) is a global content development and distribution company headquartered in Singapore, with offices in Toronto, Japan and Hong Kong.

Aurora Media Holdings (www.aurora.media) is one of Southeast Asia’s leading media and entertainment asset incubation, investment and management specialists. It operates through subsidiaries including specialty financing arm Aurora Global Media Capital, and is based in Singapore with representation in Berlin and Los Angeles.