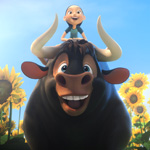 The story of Ferdinand, the peace-loving bull who’d rather be smelling flowers than fighting matadors in the ring, has captured the hearts of millions since it was first told in the 1936 book by author Munro Leaf and illustrator Robert Lawson. This month, a new generation of moviegoers can enjoy a delightful CG-animated family movie inspired by the classic tale when 20th Century Fox Animation and Blue Sky Studios’ Ferdinand is released in theaters.

Directed by Academy Award-nominated helmer Carlos Saldanha, who is best known for directing three of the Ice Age movies and the two Rio features, Ferdinand follows the adventures of a peace-loving bull (voiced by John Cena), who is separated from the loving farmer and daughter who have adopted him after he’s mistaken for a vicious beast. Along the way, the kind-hearted bull makes many friends and has a life-changing effect on the lives of the misfit animals he meets on his journey. In the film’s thrilling climactic scene, Ferdinand has to face the matador El Primero in a packed arena, but he valiantly stays true to his peaceful nature, and inspires all those around him as well.

The plan to bring Ferdinand’s tale to the big screen began more than six years ago when Saldanha was stilling working on Rio 2. “I was very excited when I found out that Fox and Blue Sky were thinking of developing a movie based on the book,” he recalls. “I had read the book and fallen in love with the story and its wonderful message of acceptance and diversity. I thought that this was the right moment to take this lovely little book and develop it into a family movie for today’s audiences.”

For long-time Blue Sky Studios producer Lori Forte, the film offered a chance to reunite with Saldanha, who had worked with her on the first three Ice Age movies. “Carlos had wanted to work on a movie which had a bull as its main character,” she recalls. “I loved working with him on the Ice Age movies, and I missed him terribly. I knew that he was passionate about this project, and his strong feelings for the story and its message also inspired me and everyone else around him.”

One of the major challenges in turning the brief 30-page book into a full-length feature was expanding its storyline and introducing new characters to accompany the central character on his journey. Saldanha and Forte point out that the deeply layered messages of the property allowed them to expand the storyline in a logical fashion. “The more research we did, the more it became obvious to us that people can interpret the story in so many different ways,” notes Saldanha. “Our story has a deeper meaning in the difficult world that we all live in today. The other characters that we added to the movie also share the same issues as Ferdinand.”

As both the book and the movie are set in colorful and historic places in Spain, Saldanha and his team made a special trip to the country to seek visual inspiration and authentic backdrops for their project. “We were inspired by the beauty of the landscapes and unique architecture of Spain,” says the director. “The color palette of the movie has a lot of earth tones to it, and is very different from the tropical colors that we used in the Rio movies. We took in the magnificent architecture of some of the cities and traveled south to the lovely region of Andalusia.”

The mountaintop city of Ronda in Spain’s Málaga province inspired the location for the farm where Ferdinand finds happiness with the young girl Mina and her father. “We wanted the art to reflect the beauty of this world,” explains Saldanha. “We wanted the locations to express the possibilities of an animated movie, but also be truthful to the art, history and culture of Spain.”

A Marriage of Art and Technology

Thanks to the latest advancements in CG technology, the artists and technical teams at Blue Sky were able to deliver animation that is meticulous in its attention to detail — from each blade of grass in the field, to the texture of a matador’s cape, to the play of light and shadow in the landscape of Andalusia.

“Every year, we develop new versions of the proprietary rendering software at Blue Sky [called CGI Studio],” explains Saldanha. “We made the best use of the technology to make a big artistic impression. Ferdinand is not a movie with huge special effects. Our goal was to best use the technology to create the right look that helps serve the art direction and the lighting. Everything has been ray-traced meticulously, and it looks beautiful. The team succeeded in solving complex challenges in the depiction of the crowd scenes as well. They were able to pull it off in a way in a very subtle way, so that the technology isn’t overtly obvious on the screen.”

Art director Thomas Cardone (Rio 2, Horton Hears a Who!, Ice Age: The Meltdown) says when you mention Ferdinand to people everyone seems to remember two basic things about the story. “Everyone says, ‘Oh yeah, that’s the movie about the bull who only wants to smell flowers and doesn’t want to fight,'” he points out. “I found the project instantly appealing because it’s a big story with a few characters, so you can create this intimate feeling. It is not a movie where someone has to save the world, but it’s a story with a lot of heart.

Cardone notes that character designer Sang Jun Lee came up with the philosophy for Ferdinand’s physical look, which was born out of the friendly bull’s personality. “You have this good-natured, big-hearted character that is very large, but is also very curvy,” he explains. “Ferdinand is a big, black bull, and there are no marks or costumes, so his silhouette and overall shape was very important. He is also on screen in most of the film’s shots, so we made a lot of effort to really nail down his form and the way he moves and is positioned throughout the movie.”

The specific landscapes of the Southern region of Spain and its flora and fauna played a major role in inspiring the film’s design principle. “The rolling hills, the olive trees, all those sweeping curves were in harmony with the smooth curves of Ferdinand,” explains Cardone. “Anything that opposes him is more angular and vertical — like the man-made structures. The same is true for his adversary, the matador. The humans are skinny and taller than they would be in real life, so that dictated the height of the buildings, the doors, the cars … everything around them. Our two main characters really influenced the whole shape and style of the movie.”

Ferdinand’s inner emotions are also reflected in the choice of background locations. As Cardone explains, the farm in Ronda the heroic bull longs to return to is depicted as a green and happy place, with lots of flowers and vegetation. “But the bull ranch where he is imprisoned is arid looking, which you also get in Spain during the more severe seasons,” he notes.

The region’s white stucco buildings with their terra-cotta roofs also provide neutral backgrounds against which the artists played around with memorable splashes of color. “We placed bold colors, like a bright blue wheelbarrow, a turquoise bucket or a green farm implement, against the neutral canvas,” recalls Cardone. “We would also balance the compositions with differently colored animals. The color red was especially reserved for specific key moments, like Ferdinand’s favorite poppies in the farm, or the carnations in the bull ring, or the matador’s cape.”

One of Cardone’s favorite scenes is the climactic sequence where Ferdinand faces El Primero in the ring. “I love the lighting and the drama of it,” he notes. “Staging is very important to us, and we worked hard to bring out the light and shadow values in that sequence. The fight is held in the afternoon, so half the stadium is in light and the other half is in the shadows. Ferdinand is dark against the light background, while the matador is light against the dark. It really amplifies the emotions and really makes the scene pop.”

The art director points out that all the artistic elements work nicely together to deliver the heartfelt message of the movie. He concludes, “I think this movie has such a big heart, so I was very pleased with the way the style, the design, the lighting and all the technical element join forces to serve a common goal.”

Fox/Blue Sky’s Ferdinand will begin its theatrical journey on Friday, December 15. The film is one of 26 animated feature Oscar contenders and was recently nominated for the Golden Globe Award for Best Original Song for “Home” by Nick Jonas.