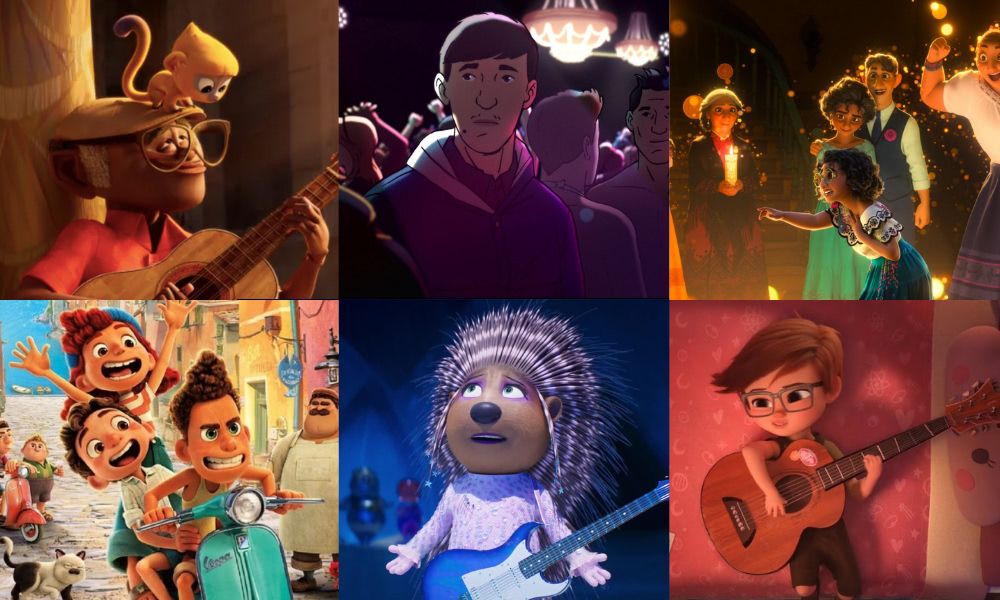 Music was the key to many of 2021's biggest animated movies, both as a world-building element and major story point.

If the 90-plus-year relationship between animation and music can be described as a marriage, 2021 might have been its belated honeymoon. It is hard to think of another year where music played such an intrinsic role across the board in animated features. And if the year’s slate of films was a championship series, its MVP might be Lin-Manuel Miranda, whose songs are driving forces behind both Walt Disney Animation Studios’ Encanto and Sony Pictures Animation’s Vivo.

For Encanto, composer Germaine Franco worked in and around the songs. “Lin-Manuel had most of the songs written by the time I was on board, and I would work with picture and orchestrate to the animation,” says Franco, whose animation resume includes songs for the 2017 hit Coco. Because of the pandemic, she collaborated with Miranda through Zoom connections; the two did not actually meet until the premiere. (Franco recently made the shortlist for the Oscars’ Best Original Score category.)

Since the film is set in a magical village in Colombia, Franco heavily researched the music of that country. “We did a session online with a group of Colombian vocalists,” she says, “and we also got [singer/actor] Carlos Vives’s accordion player, Christian Camilo Peña, to come to my studio and record several cues while they were playing at the Hollywood Bowl.” Franco sought out many regional instruments as well, including a marimba de chonta, which is made only in Colombia, a special kind of guitar called a bandola and a harp called the arpa llanera. 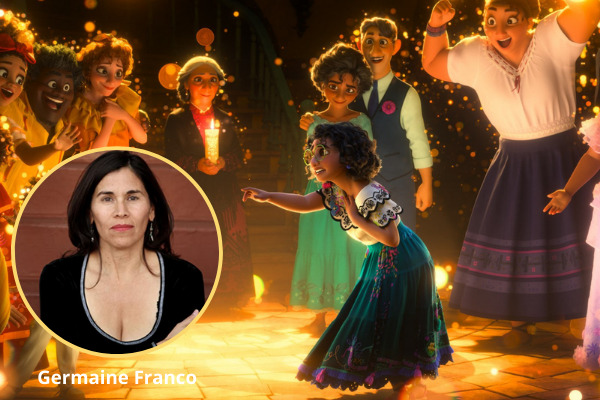 Unfortunately, COVID protocols prevented her from assembling an entire orchestra together at one time. “We were not allowed to have strings in the same room as winds,” she explains. “The biggest ensemble I had all together was strings, and harp and piano could be in the same room, people who could all wear a mask. That required a lot of editing to get the performances to sound like one ensemble.”

Tony-winning Broadway music arranger and orchestrator Alex Lacamoire made his debut as a solo feature film composer with Vivo, though it was anything but his first association with Lin-Manuel Miranda (who also voiced the film’s title character and executive produced in addition to providing the songs). Lacamoire previously worked with him on both In the Heights and Hamilton. The score for Vivo, which is set in Cuba and Florida, reflects the musical influences of each location and the composer used a variety of Cuban instruments, notably a Batá drum and a three-string guitar known as a tres. “You hear the tres often as a motif for Andrés, the central character,” Lacamoire says, “and you hear the Batá drum for a lot of the chase scenes with the snake [when Vivo and Gabi are lost in the Everglades].”

One of the more distinctive sounds in the film is the street organ played by Andrés, which sounds like a calliope but was created by something even rarer these days. “There is a fabulous film composer in Los Angeles named Nate Barr and he actually renovated a Wurlitzer organ from the Fox Studio Lot,” Lacamoire says. “I sent him the music digitally and he recorded it and sent it back.” 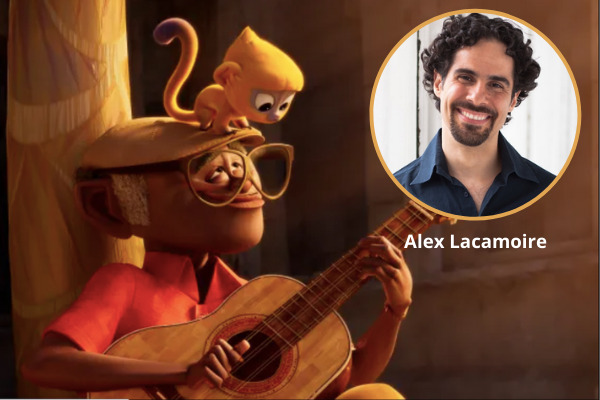 Like Franco and Lacamoire, Dan Romer, the composer of Pixar’s Luca, also focused on the musical sound of a particular country, this time Italy. “I submerged myself in Italian pop music, old and new, and also film score music from Italy,” Romer says. “I listened to almost nothing but Italian music for the months leading up to starting Luca.”

Working closely with the film’s Italian-born director Enrico Casarosa in researching the music, Romer states that the challenge was not going overboard. “We didn’t want a straight-up Italian score, but we also didn’t want an electronic synth score that had nothing to do with Italy.” He adds that the decision to use a smaller orchestral sound was an attempt to recreate the sound of classic Italian film scores by the likes of Nino Rota and Ennio Morricone. “We used a smaller orchestra and added accordion, guitar, mandolin and hand percussion that you would find in more traditional Italian folk songs and pop bands.” 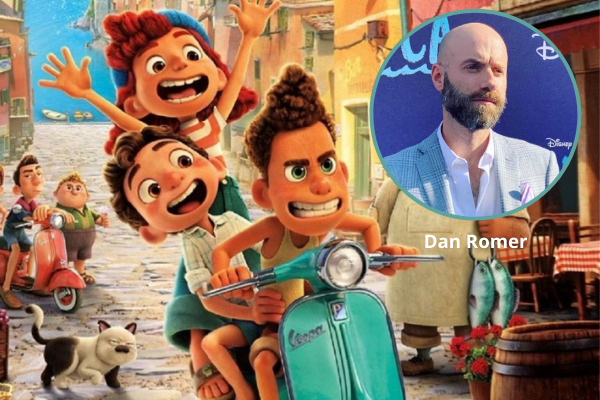 Songs in the Key of Pop

For Illumination and Universal Pictures’ Sing 2, songs are in a sense the raison d’être for the picture. But since nearly all of them are classic tunes covered by the characters, score composer Joby Talbot was unable to borrow themes and motifs from them to segue in and out. “The only song I quoted was the new one written by U2 for the end of the film,” he says. That led to the challenge of connecting the songs with orchestral music, while still supporting the story both in its “real-life” scenes as well as its theatrically staged numbers. “I come out of one song and do a ton of action, and then go straight into another song,” Talbot explains. “You have to make people not notice how hard you’re working when you start in one key, end in another key, while in the meantime tell a whole bunch of exciting storytelling, and then effortlessly hand it over to a song by a totally different songwriter from a totally different era.”

For the overall score of Sing 2, Talbot says writer/director Garth Jennings wanted a big, old-school, Golden Age of Hollywood sound. “The very opening fanfare wouldn’t be out of place in a sword-and-sandals epic of the 1960s,” he states. 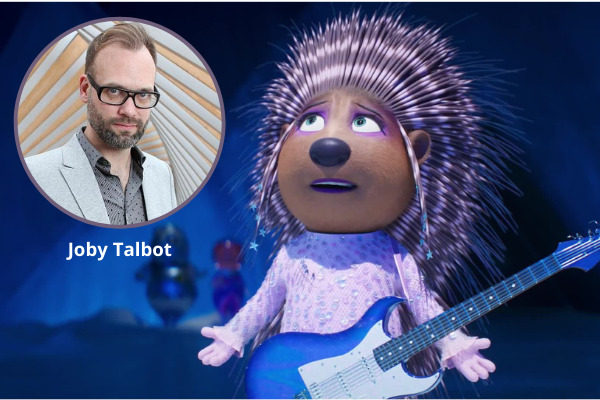 Recognizable songs and motifs also feature prominently through the music for DreamWorks Animation’s The Boss Baby: Family Business, which like its predecessor The Boss Baby (2016) was scored by Steve Mazzaro. “On the first one [director] Tom McGrath had [Irving Berlin’s] ‘Cheek to Cheek’ at the beginning,” Mazzaro says. “That set up the tone of where we wanted to go with the songs, and for Boss Baby: Family Business we wanted to keep in that same vein. There were some people who wanted new pop songs, but we stuck to our guns and said, ‘These are great songs and artists.’”

The Boss Baby: Family Business starts with former babies Tim and Ted in their 30s. For the scenes in which they are adults (prior to reverting magically back to childhood), Mazzaro “aged” some of the character themes he created for the first film. “When Ted enters on the helicopter, he gets a very adult, grand entrance,” he says. “But in a way, Tim never really grew up, so he never really gets his grown up version. Once they turn into babies again, we took the orchestrations back to the way we had them in the first one.” The composer also created original character themes for new characters Tabitha and Tina, co-wrote an original song, “The Global Warming Song,” and even managed to slip in some audio Easter eggs from earlier DreamWorks animated films Madagascar and Spirit: Stallion of the Cimarron. And unlike some animated features produced over the last couple years, Mazzaro had a complete orchestra at his disposal, in London — but because of travel restrictions could not be there with them, relying on Skype to communicate with the conductor. 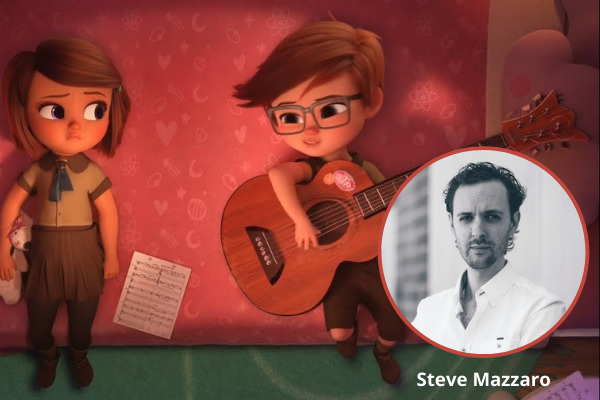 Of this year’s plethora of Oscar-mentioned animated features, the most unusual is Flee, distributed by Neon, an animated documentary from Denmark that tells the story of an Afghan refugee who relates his traumatic story for the first time to his lover. While it is a true story, animation is employed to mask the real refugee’s identity with the pseudonymous character ‘Amin.’

The protagonist’s audio recordings and a rough animatic were the starting points for Swedish composer Uno Helmersson, who specializes in documentary films, to commence work on the film. “I listened a lot to Amin’s voice and how he phrased things,” Helmerson says. “I had this idea to manifest his feelings and his agony musically, describing with music the things he doesn’t say.”

Helmersson, who worked on the picture on and off for nearly two years, says he combined individual sounds with orchestration, and even moments of silence, to “collect the colors” of a film. “The violin is one color. Playing rhythm on a piano is another color. The first track in the film, called ‘What Is Home?’ [has] voices singing and a cello playing a line, and then a violin playing a quicker line, and a string quartet playing chords, so there are all these layers of sound and waves of emotion. If you look at a painting, at first you just see an image of something, and then when you start to really investigate it, you see all these colors together that create the image. That was the idea of the build-up of the music, all these colors that put together the image of Amin’s emotional journey.” 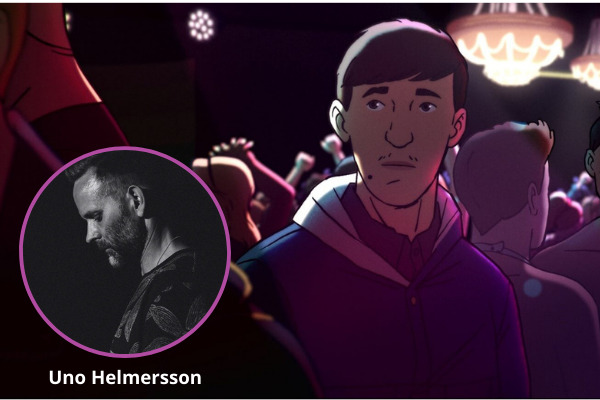 The heightened importance of music in animation also serves to heighten the challenge for the composer. “In animation there is no ‘vamp-till-ready,’” Joby Talbot points out. “Every bar has got to show you the point-of-view of the character, the emotions, and explain subconsciously what kind of narrative you’re talking about.”

Creating the perfect sounds, it turns out, isn’t as simple as it sounds.

Michael Mallory is an award-winning journalist and author who is a frequent contributor to Animation Magazine. He is the author of Universal Studios Monsters: A Legacy of Horror (2021, updated edition) and the novel Ebenezer Scrooge and the Battle for Christmas (which he’d love to sell to an animation studio).