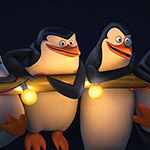 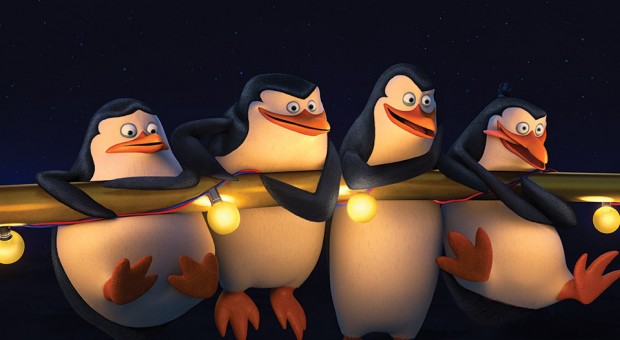 The popular sidekicks of the DreamWorks’ Madagascar franchise are ready for their own close-ups in Penguins of Madagascar.

Since their first appearance in DreamWorks Animation’s 2005 blockbuster hit Madagascar, audiences knew that Skipper, Kowalski, Rico and Private were destined for greatness.  With the debut of Penguins of Madagascar this month, the fabulous foursome is finally starring in their own theatrical extravaganza, which also offers a glimpse at the clever birds’ origin story as well.

“The film is a continuation of where we left off in the last Madagascar movie,” says Eric Darnell, the veteran of the first three movies, who co-directed the movie with Simon Smith (Antz, Bee Movie). “There is a prologue sequence during which we go to Antarctica and see our four characters when they were baby penguins and show how they became this renowned espionage team.”

Smith says the movie’s tone, sense of humor and conflict with the adversaries will be familiar to fans of the Madagascar franchise. “We’re basically taking the penguins and putting them center stage, so instead of having them in small bits and pieces, we have a whole film that allows to have a lot of fun with them.”

To make the penguins work as central characters, the team at DreamWorks had to go deeper and underline elements of the foursome that hadn’t been explored either in the the three previous feature outings or the popular TV series, which ran from 2009 through 2013 on Nickelodeon. “In the Madagascar movies, we could just have fun with them or they were allowed to make the plot go forward in some wacky way,” says Darnell. “The characters weren’t growing or changing. For this movie, we had to dig a bit deeper, to explore what really makes them tick, what is underneath the surface and really understand the dynamics and relationships between the penguins.”

Smith adds: “What’s really appealing about them is that they are not passive characters. They shoot first and ask questions later. They react illogically and always run towards danger. They do have a strong moral code, but they do the exact opposite of what a normal person would do. They have this incredible sense of belief that they can do anything — and that actually becomes a question in the movie.”

The film, which once again features the voices of Tom McGrath, Chris Miller, John DiMaggio and Christopher Knights as Skipper, Kowalski, Rico and Private, also welcomes Benedict Cumberbatch as Classified, the team leader of a super slick espionage group called the North Wind; John Malkovich as a villainous octopus named Dr. Octavius Brine, and Ken Joeng as Short Fuse, an explosive expert seal. Adding a certain sophisticated quality to the proceedings is the film’s narrator, who is none other than highly regarded German director Werner Herzog.

“We didn’t want the movie to be a parody of spy capers,” says Smith. “We actually approached the film as if we were jamming our characters in a 1960s-era Bond movie.” Darnell says they also took a page from classics such as Kelly’s Heroes, The A-Team, and Hogan’s Heroes. “We have this sophisticated North Wind agency who is always looking down at the penguins, so we had a good opportunity to use the conventions of the spy movie genre. In the third act, for example, we see the villain’s submarine emerge from the water, and it’s a beautiful scene. One of my favorite sequences has the penguins falling out of a plane, 30,000 feet above the ground. It’s a huge action scene, which involved a lot of choreography. It was actually one of the first scenes we produced for the movie. Simon even managed to work a several minutes sequence with a one-shot camera feel, like something out of a Scorsese movie.”

Especially challenging to animate was the film’s main villain, Dr. Octavius Brine. As Smith points out, octopi are difficult creatures to animate because they don’t have internal or external skeletons and have eight tentacle-covered arms that can move in any direction.

Among the many cutting-edge tools that helped the Penguins team realize their project was DreamWorks’ Premo for animation, which allows artists to pose tablets and get immediate playback of high-resolution models, and Torch for lighting, which is used to design the overall look and provides a better interface for the renderer, managing digital files containing info on geometry, color and texture. As Darnell explains, “In the old days, we used to fiddle with the curves and punch the numbers in a spread sheet and go for a 30-minute coffee break, while all the information was processed. Now we can actually grab the characters and move them into any pose you want and see the animation in real time.”

This new speed and efficiency proved to be especially useful when the studio decided to push up the film’s release to this holiday season rather than the originally planned March 2015 date. It seemed logical to use the popularity of the penguins to go up against Disney/Marvel’s Big Hero 6 and push back the release date of Home (a movie which introduces brand new characters) to the less competitive spring date. “They really liked the progress on the film and figured out that Thanksgiving would be a good time for us since it’s really a film for everyone in the family,” notes Smith.

The directors are also quick to express their gratitude towards the DreamWorks Dedicated Unit team at Technicolor, based in Bangalore, India, which helped with the animation production. “They are a very professional group of artists and although they have worked on many projects before, they had never done an entire feature,” says Darnell. “We didn’t know what to expect, but they did an amazing job. They’d be up at six in the morning, and we would stay until ten at night to communicate. We were very pleased with the way our teams here in Glendale and Redwood City (near San Francisco) and the group in India on the other side of the planet were able to work together and the results were really outstanding. “

As they put the finishing touches on their four-year-long project, the directors seem to be quite happy with what they have achieved. “I am most proud of the fact that we took the penguins on such an emotional journey,” says Smith. “You don’t see it coming, but the movie has a lovely heart. I’m really ecstatic about how every character has a great moment in the film.”

Darnell agrees. “You never want the audience to say that the latest movie isn’t as good as the other ones,” he admits. “One of the advantages of working on a franchise for over a decade is that we know the rules and the characters very well. People who have worked on the Madagascar films have all these years of experience working with these characters. When all is said and done, we all just want to make the best movie we can make and for audiences to enjoy it all.”