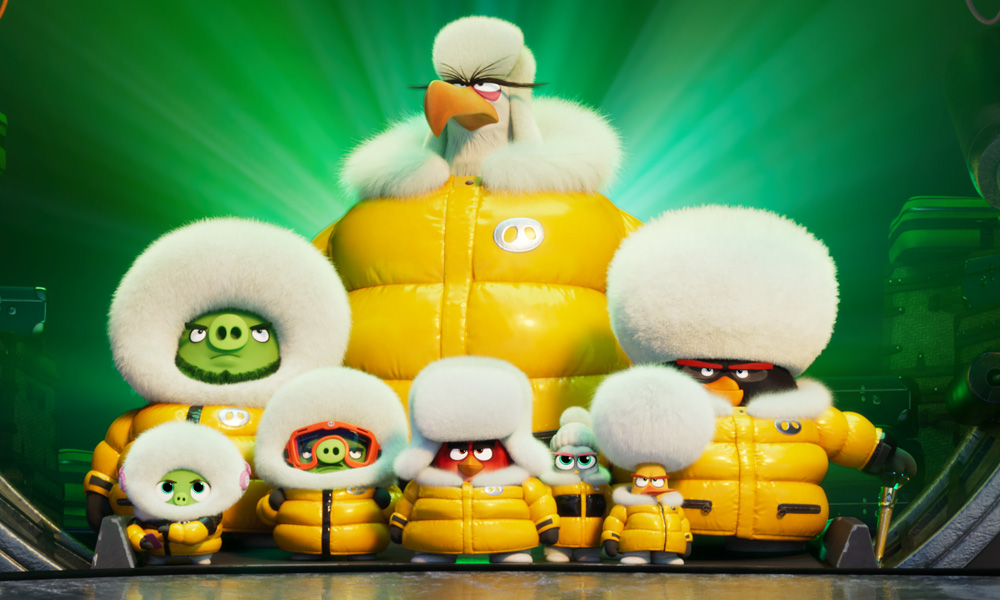 Whether or not you were addicted to the original Angry Birds game developed by Rovio around 10 years ago, the success of the first animated film based on it probably took you by surprise. Before the film, the birds were definitely pop culture phenoms, but making them movie-worthy was something else entirely. The filmmakers found a way to create a cast of heartfelt feathered friends, and walked away with a $352 million worldwide haul in 2016.

The franchise quickly spawned dozens of stuffed animal sales, partnerships with companies like LEGO to make building sets and the sorts of small plastic tchotchkes that grade school kids love to hang off their backpacks. Once you’re everywhere, where do you go from there?

This month, director Thurop Van Orman and producer John Cohen, working with a budget similar to the $73 million first film, hope to pull audiences back into the nest as our once unlikely hero Red (voiced by Jason Sudeikis) faces a new porcine challenge. Instead of defending himself and his island from a band of evil piggies, Red must join the pigs in order to fight a new foe named Zeta, whom we meet as she’s tossing snowballs at the sunny isle where the birds live. Suddenly, the enemy of Red’s new enemy becomes his friend.

“The first movie brought the amazing world of the Angry Birds games to life, and made it deep and three dimensional with interesting characters,” says Van Orman, a veteran of Cartoon Network’s Adventure Time and The Powerpuff Girls and the creator of the cult favorite The Marvelous Misadventures of Flapjack. “We tried to take it even one step further and move the whole world in a different direction with this sequel.”

“I think it’s so important in a sequel to really give the audience something new and exciting,” says Cohen, whose credits include the first Angry Birds movie, Despicable Me, Hop and the 2020 Garfield movie. “I think that the new places in our movie like Eagle Island, the place where the eagles and Zeta (Leslie Jones) live has such a distinct feel from anything that we had in the first movie or anything that’s in the Angry Birds games.”

Surprises in the Sequel

The first film certainly proved the characters could capture a theatrical audience and now the crew set out to show that story could be expanded in unexpected ways. This project brought together a crew that peaked at around 400 people during prime production. Many of them were based in Vancouver at Sony Imageworks, and many had just come off working on Spider-Man: Into the Spider-Verse, according to Cohen.

Production designer Pete Oswald was the key architect of Eagle Island, and it became something distinct from any of the other locations in the film. Oswald also worked on the first Angry Birds movie, which set the specific look of the world where the birds and the pigs live as based on the games by using the kind of bright colors that popped and made a vivid statement. 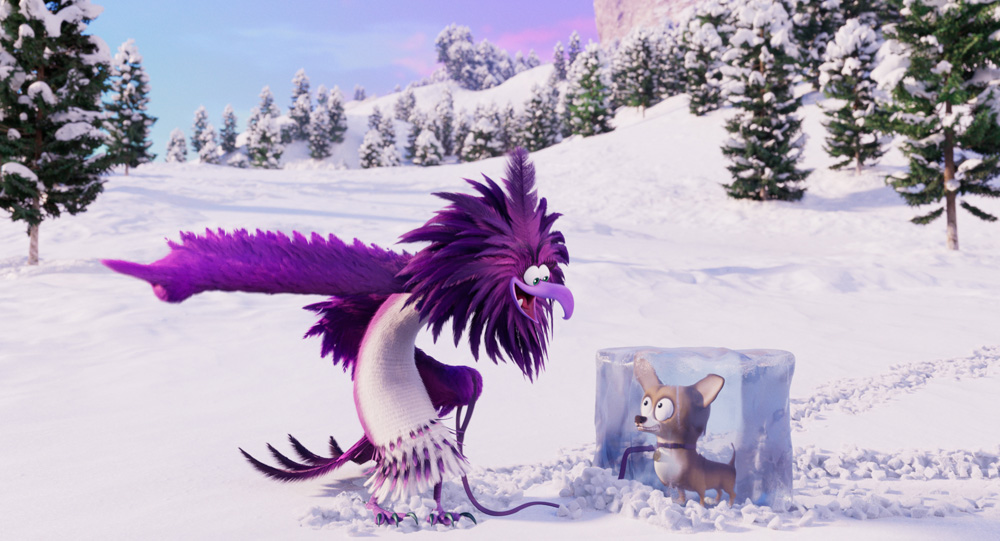 “We used some similar color palettes from the first film, but with the introduction of Zeta and the eagles, we wanted something fresh and unexpected,” says Oswald. “Eagle Island is rugged and frozen, the exact opposite of the tropical islands where the birds and pigs live. We wanted to accentuate how cold Eagle Island was so that Zeta’s motive was very clear. She’s so obsessed about living on a tropical island that she carved palm trees, a tiki bar and swimming pool out of ice.”

Oswald mentions that the team wanted the ice volcano to look like a natural volcano from the outside. However, once audiences go inside, they see a whimsical and brilliant super weapon. “We loved the idea that the super weapon is powered by colorful lava tubes,” he explains. “It’s almost like giant lava lamps from the ’70s. I like the contrast between the lava and ice. I thought this related to Zeta’s character. Her emotions can change quickly. Zeta is very hot and cold.”

A Smooth and Steady Pipeline

With a film this size that introduces an entirely new world into the mix, it would be easy to complicate the production process. Oswald worked with tools that kept the pipeline running smoothly.

“In the art department, we primarily use Adobe Photoshop,” says Oswald. “The program allows my team to paint and edit images much faster than painting traditionally. We also use Maya to build previz models of environments. By building crude CG sets, we are able to get the size and proportions correct. Then we take stills of those models and do paint-overs. This is very beneficial when we start to build the final model at Sony Pictures Imageworks.” 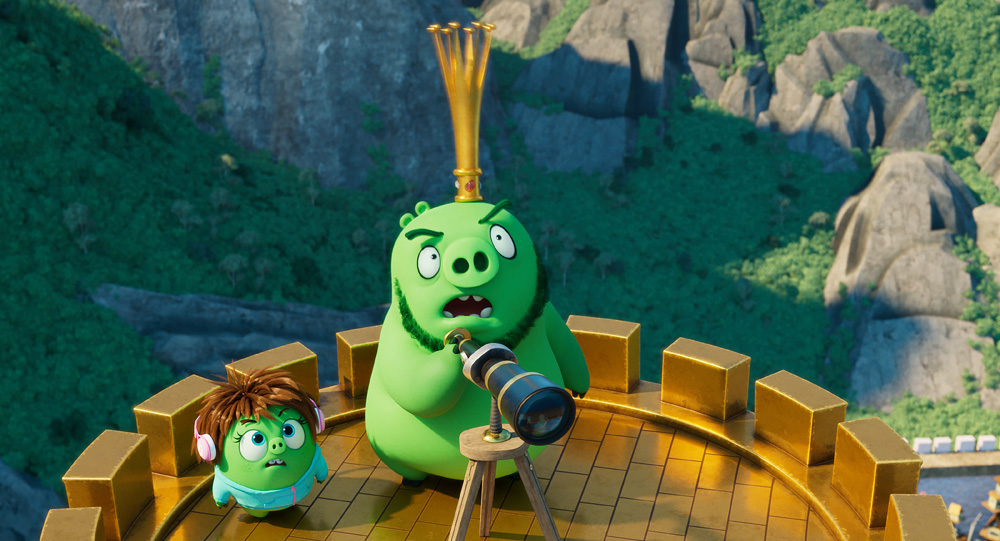 The filmmakers also shook up the film by bringing in new talents and characters that push Red out of his comfort zone, explains Cohen. Zeta, voiced by SNL standout Jones, Courtney (Awkwafina) and Debbie (Tiffany Haddish) are all new to the Angry Birds story. The actors that portray them join veterans Sudeikis, Peter Dinklage and Bill Hader. Of course, when you have a voice cast made up of some of the most gifted comedians of the day, you never know where you’ll end up – regardless of how much you’ve already scripted.

“We love to work with great improvisational comedians,” says Cohen. “You start with an amazing script, and the actors come in and make those lines even more hilarious, and then they do some improv and some ad lib – which just adds so much more to it beyond the great scripts that we start with.”

Van Orman adds, “We record everyone separately so you have to track all these new things every time they improv. So you could have a whole new storyline that you then have to track with every other actor. Every single one of these actors brought so much to the movie that you love and don’t anticipate, and it was a lot to track.” 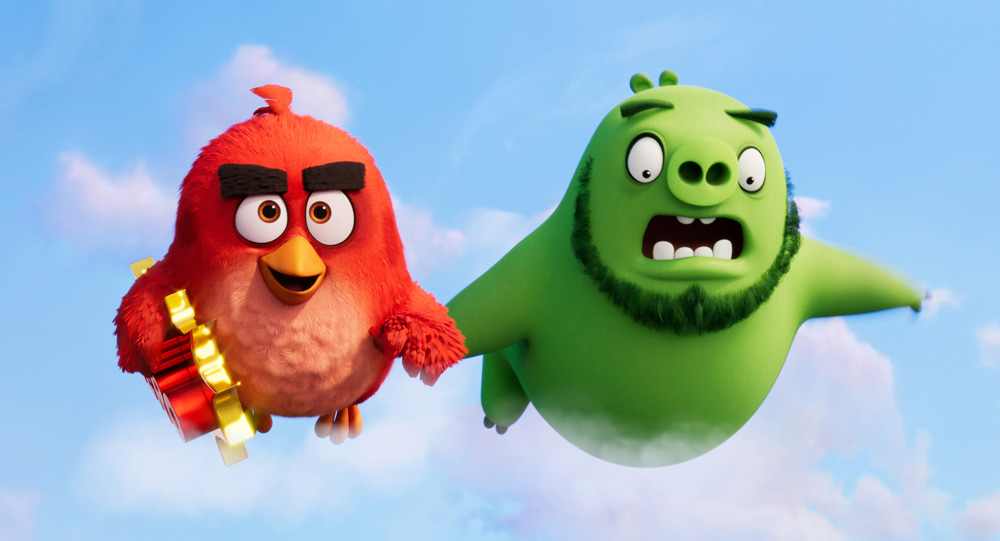 Cohen and Van Orman are also quick to credit the talents of Oswald as a production designer and Sudeikis as a voice performer for the early success of the first film.

“Pete [Oswald] is just one of the most talented people I’ve ever worked with and brings so much to what we were doing on this film and the first one,” says Van Orman. “And Jason Sudeikis is so likeable that even when he becomes Red, who is a lot more sarcastic and glass-half-empty than Jason is in real life, he makes the character seem funny and endearing and you end up relating to what he’s going through. So, here’s a character that’s an outcast, and he’s struggled for most of his life to find a purpose and be liked and have friends, and I think that’s something that everyone feels on some level. In the first movie, he was the underdog who proved himself, but he’s still kind of an underdog. He became everyone’s hero but he’s still feeling like he’s not good enough, which I think is pretty easy to identify with as a human being. And in this movie, that struggle is even more fun to watch.”

Sony will release The Angry Birds Movie 2 in theaters on August 14, the 10th Anniversary of the original game’s release date. 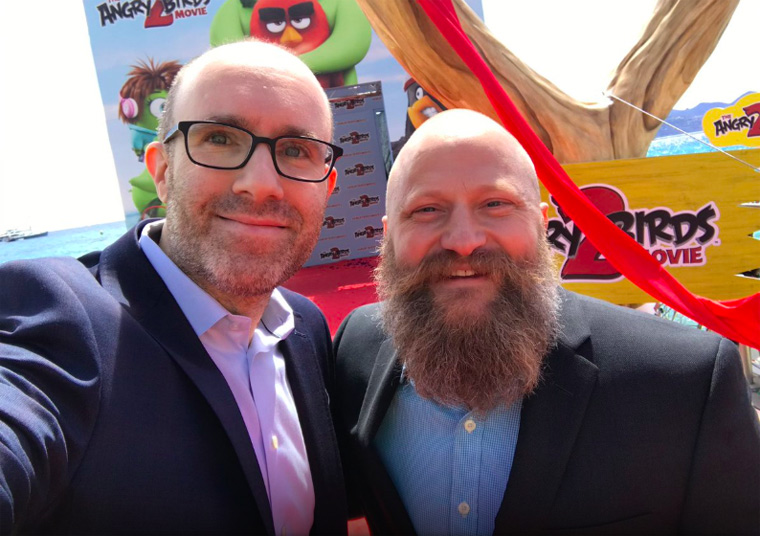 It’s a Playmobil World After All!
Revisiting the World of Thra in ‘The Dark Crystal: Age of Resistance’