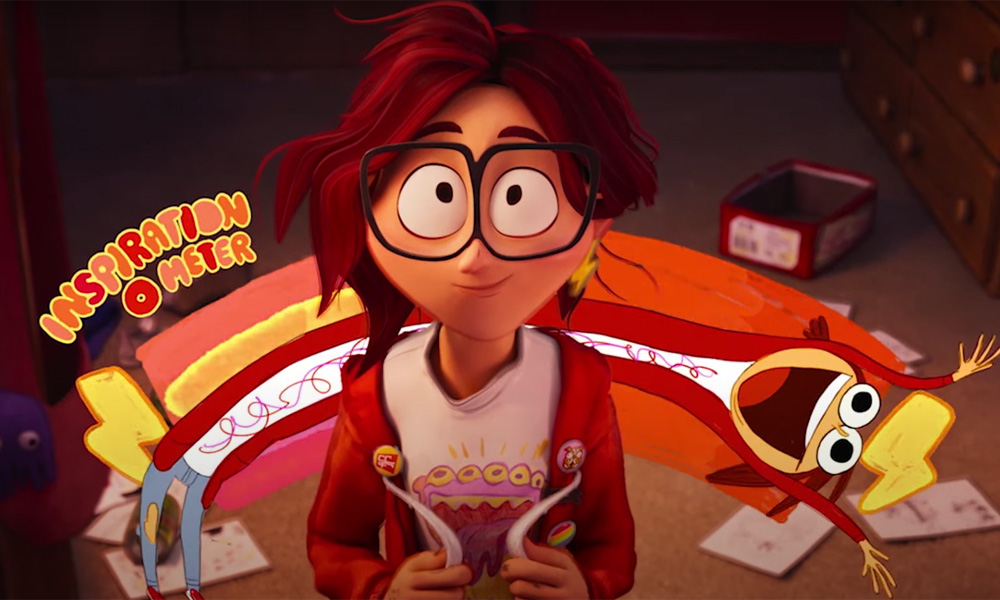 With the new Sony Pictures Animation original feature streaming at last, the Netflix Film Club has unveiled a special featurette on “The Groundbreaking Animation of The Mitchells vs. The Machines.” The behind-the-scenes video drop coincides with a production panel announcement from the ongoing virtual VIEW Conference.

In the new featurette, audiences get an exclusive look at the innovative animation techniques used to bring The Mitchells vs. The Machines to life, featuring visual effects supervisor Michael Lasker, production designer/lead character designer Lindsey Olivares, writer-director Mike Rianda, and producers Phil Lord and Chris Miller. Learn how the filmmakers translated the organic quality of the concept illustrations to cutting-edge CGI, including capturing a hand-drawn line look, illuminating the world with stylized lighting, and the vibrant graphics of ‘Katie-Vision’.

To learn more about the making of this ambitious visual feat, mark your calendars for Friday, May 14 when VIEW Conference (in cooperation with OGR, Sony Pictures Animation and Netflix) presents an online conversation with The Mitchells vs. The Machines Creative Team. The free to stream session will feature Rianda, Olivares, Lasker, co-director/writer Jeff Rowe, head of story Guillermo Martinez and head of character animation Alan Hawkins. The panel is scheduled for 10 a.m. PDT / 6 p.m. GMT / 19h CET. More information and free registration available here.

Synopsis: From the humans who brought you the Academy Award-winning Spider-Man: Into the Spider-Verse and The LEGO Movie comes The Mitchells vs. the Machines, an animated action-comedy about an ordinary family who find themselves in the middle of their biggest family challenge yet … saving the world from the robot apocalypse. No big deal, right?

It all starts when creative outsider Katie Mitchell (Abbi Jacobson) is accepted into the film school of her dreams and is eager to leave home and find “her people,” when her nature-loving dad (Danny McBride) insists on having the whole family drive her to school and bond during one last totally-not-awkward-or-forced road trip. But just when the trip can’t get any worse, the family suddenly finds itself in the middle of the robot uprising! Everything from smart phones, to roombas, to evil Furbys are employed to capture every human on the planet. Now it’s up to the Mitchells, including upbeat mom Linda (Maya Rudolph), quirky little brother Aaron (Rianda), their squishy pug, Monchi (Doug the Pug), and two friendly, but simple-minded robots (Fred Armisen and Beck Bennett) to save humanity.