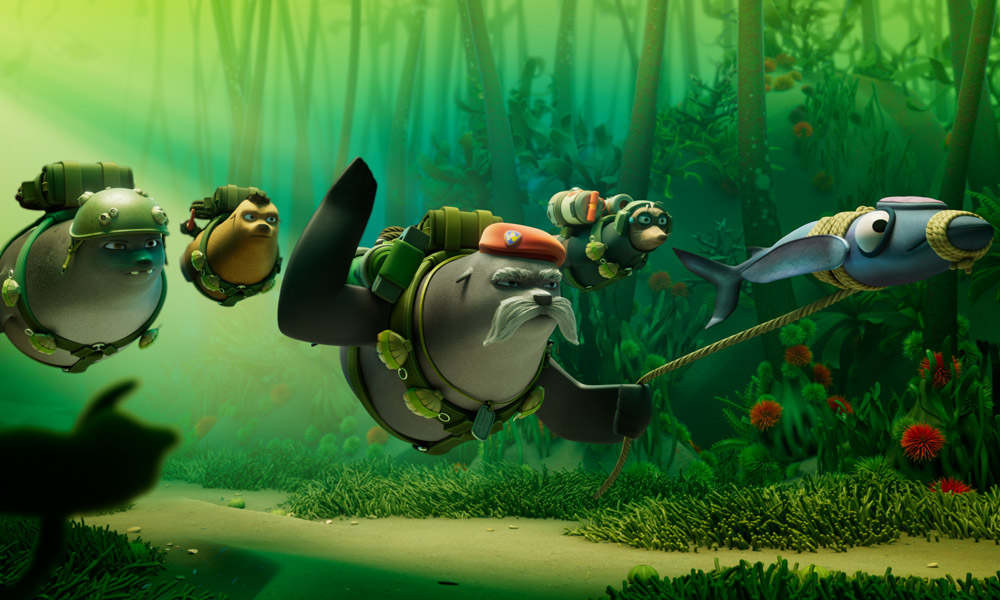 On the heels (or flippers) of winning this year’s MIFA Industry Award at the 2021 Annecy Festival, as well as being spotlighted as part of the event’s focus on African animation, esteemed South Africa-based studio Triggerfish has parted the waves to reveal the official first teaser for its latest CG-animated feature family adventure. The comedy-adventure about a crack squad of oceanic animals has recruited an A-list crew of voice actors to bring it to life.

Seal Team is the story of Quinn, a seal who spends his days relaxing in the sun, splashing in the beautiful waters off the coast of Cape Town, and swimming for his life from Great White Sharks. When he decides it’s time for the food chain to bite back, Quinn recruits a ragtag team of likeminded seals brave, stupid and crazy enough to try and teach those sharks a lesson — once and for all. Jaws will drop…

“Believe it or not, our underwater military animal team is based on a real unit that trains seals and dolphins to disarm mines, so we wrote a dolphin in for ‘accuracy,'” said writer-director Greig Cameron (Supa Strikas). “Admittedly, the real life versions don’t wear sunglasses, chew on (unlit) cigars and bust out catchphrases…”

Triggerfish recently revealed that action legend Dolph Lundgren (Universal Soldier, Aquaman, The Expendables) and Emmy-winner Matthew Rhys (A Beautiful Day in the Neighborhood, Perry Mason, The Americans) have joined the voice cast. Lundgren voices the cool, suave dolphin Dolph, who took showbizness by storm after his special ops military unit was disbanded, while Rhys will make the water ripple with his portrayal of Grimes, the mafia boss-like alpha shark.

“I wanted to be in Seal Team partly because my four-year-old son is obsessed with sharks and partly because Grimes isn’t evil, just misunderstood. Getting to voice an enormous, scary shark was more fun than I imagined,” said Rhys.

“I watched Matthew in A Beautiful Day in the Neighborhood… and after crying for pretty much the whole of that emotional, moving, heart-warming film, I was like, ‘This is our terrifying villain!’ Well, not exactly, but it did show what an unbelievable actor he is,” noted Cameron. “From his first line in the booth, it was clear that we had our baddie: he had all the sleazy salesman charm I was looking for, with constant menace lurking underneath. When he shouted he was scary; when he whispered he was even scarier! And Matthew was so funny as well. It is the fate of most animated film villains to spend their days dealing with idiot henchmen and the way he captured that on-edge exasperation cracks me up every time. What a pleasure!”

The helmer, who crafted the original story and wrote the screenplay with Brian & Jason Cleveland and Wayne Thornley, added, “We called the dolphin character Dolph because we thought it was hilarious, and the snowball kept on rolling and growing until the man himself actually agreed to be in the film. A lot of this movie is an homage to the ’80s and ’90s action films I grew up with, so having an icon of that era actually be in our film is so totally perfect. He was fun to work with and really gracious with all the silly, over-the-top stuff we asked him to do: Getting one of my favourite grizzled action stars to ‘Ek ek ek’ like a dolphin is the life-long dream I didn’t know I had until it happened.”

Cinema Management Group, which handled worldwide sales on Triggerfish’s previous two animated hits, Adventures in Zambezia and Khumba (combined worldwide box-office over US$ 61million), executive produces and is in charge of worldwide sales. Khumba is having a closing-night open air screening at Annecy this year, eight years after premiering in competition at Annecy in 2013.

In addition to producing Seal Team, Triggerfish is also in production on Mama K’s Team 4, the first animated Netflix Original series from Africa, and the Africa-set series Kiya for eOne, Disney Junior and Disney+. Both projects came out of their ambitious 2015 pan-African talent search, The Triggerfish Story Lab.