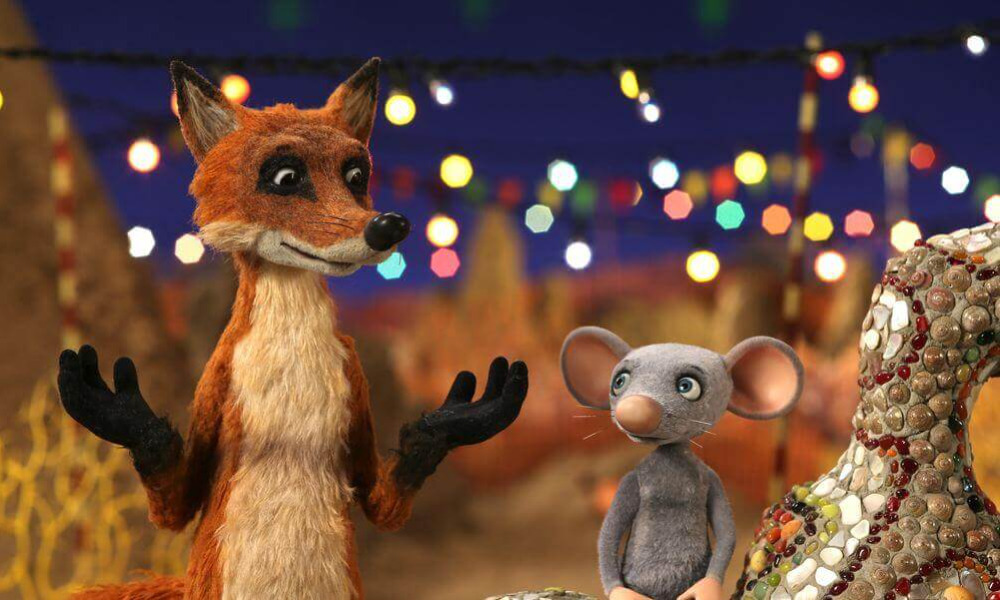 It’s not every day when we get the chance to experience an animated movie in which the main characters die and go to heaven in the beginning of the story. That’s exactly what happens in Czech directors Denisa Grimmová and Jan Bubeníček’s recent stop-motion feature Even Mice Belong in Heaven, in which an initially combative mouse and a gentle fox form a challenging friendship in the afterlife. Based on a picture book by Iva Procházková, the film was released in France and the U.K. last year and was nominated for the César for Best Animated Feature and a European Film Award. 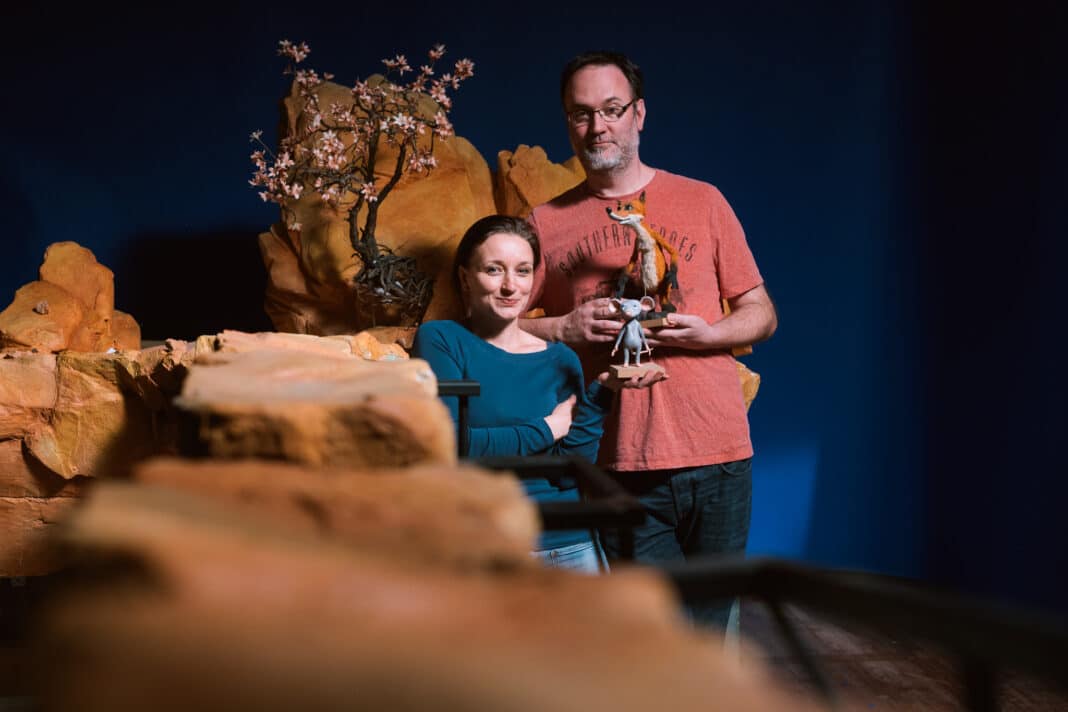 It was Grimmová who first came across the book and thought it would be a great project to adapt into an animated movie. “She was firmly convinced that we had to do it,” recalls Bubeníček, who is also her husband. “She was captivated primarily by the themes that the story encompassed, but also by the very natural way in which they are introduced for children. Denisa’s perseverance and the determination of producer Vladimír Lhoták gradually set in motion a whirlwind that drew in more and more people.”

“After many years of literary and artistic prep work, we started shooting in the autumn of 2018,” recalls Grimmová. “With eight animators and another 20 crewmembers on 14 sets, we took 1,400 shots on one by one. Post-production began on more than 900 shots while we were still shooting and continued for nearly half a year afterwards!” 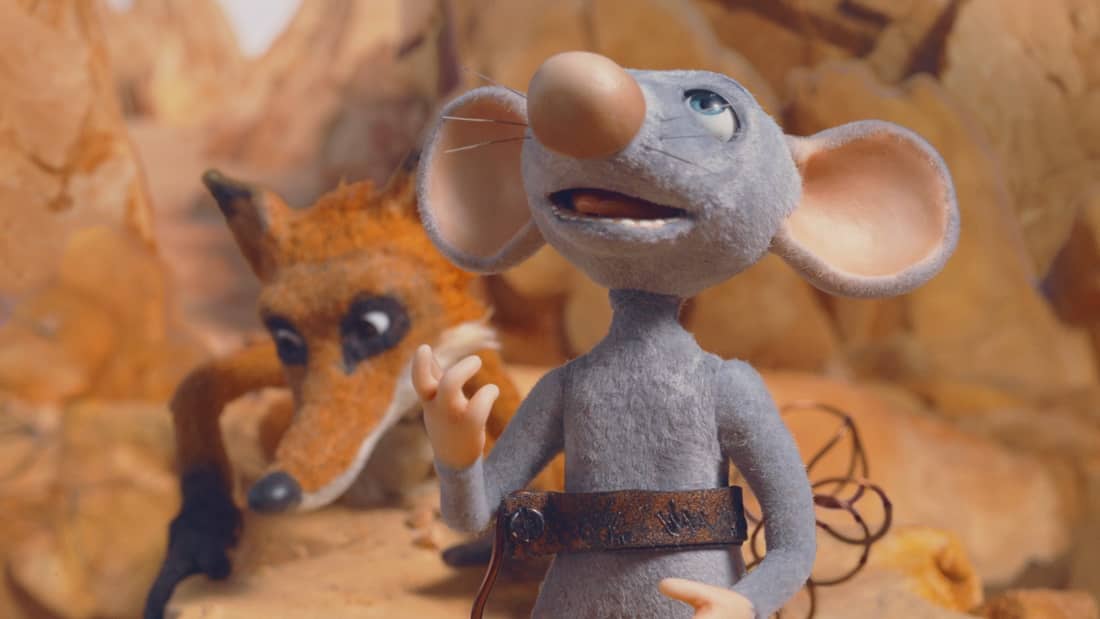 A Tale of Friendship

The 90-minute feature, which is a co-pro between the Czech Republic (Fresh Films), France (Les Films du Cygne), Poland (Animoon) and Slovakia (CinemArt), is the result of several years of hard work from the directors and their teams. But it was the book’s original story that kept the filmmakers on the right path throughout the process.

“The story of Mice looks like an uncomplicated story for children,” says Grimmová. “What we personally enjoy about it is how charged it is with seemingly insurmountable conflict and difficult and truly fundamental themes, like death, the loss of loved ones, the loss of everything you’ve come to be. It is a film about looking for love and truth, which are often closer than we think. It’s also a story about sacrificing yourself for someone else, about cooperation — which ultimately always leads to victory … It offers strength and determination; it tears down stereotypes.” 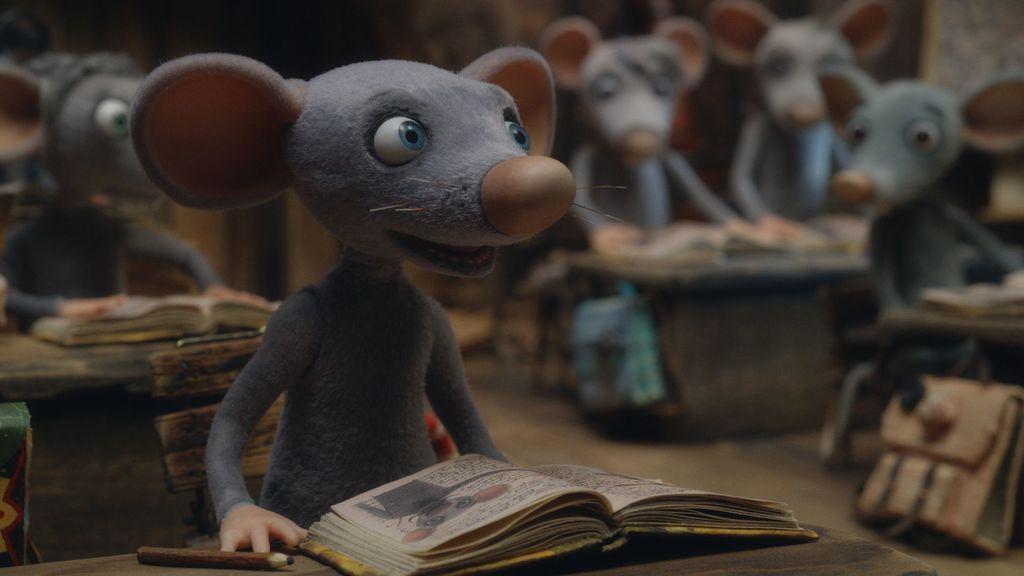 Altogether, the artists created about 105 puppets for the movie — the lead characters required 10 and eight copies, and there were 87 additional characters to design and create. All of them were designed by Grimmová and then built in two different studios: About one third of the puppets were built by the team at Momakin studio in Łódź, Poland, where all the mice and other rodents were created. All the foxes and the heavenly guardians were made in the Prague studio, located in the Krátký Film building at Barrandov Studios. 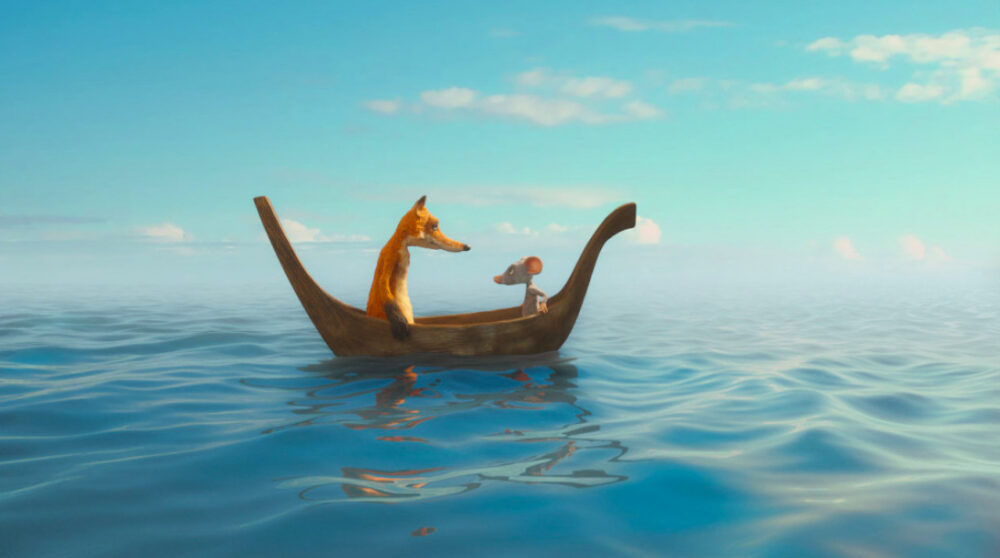 Throughout the project, the two directors shared many responsibilities on and off the set. “Denisa was the main artist on the project and every character went through her hands, as did every set and the vast majority of the props,” notes Bubeníček. “In addition to directing, I also helped with the production system (the pipeline) and the technical aspects of the film, the animatics and the digital effects, particularly when it came to 3D modeling and animating. We did the actual directing together. Over the course of production, certain lines got blurred and we learned all kinds of things from each other. In some ways, we could fill in for one another more than we could at the start!”

Both Grimmová and Bubeníček studied animation at the renowned Film and TV School of the Academy of Performing Arts (FAMU) in Prague. When asked about their big animation heroes and influences, they respond: “We prefer the world of stop-motion the most. We cannot forget the legends of Czech golden animation era — Jiří Trnka, Karel Zeman and Břetislav Pojar. We were also inspired by Jiří Barta, Pavel Koutský and Jan Švankmajer. Yuri Norstein, Priit Pärn, Tim Burton, Wes Anderson and Nick Park are among the many acclaimed international directors we love. And Hayao Miyazaki, of course!” 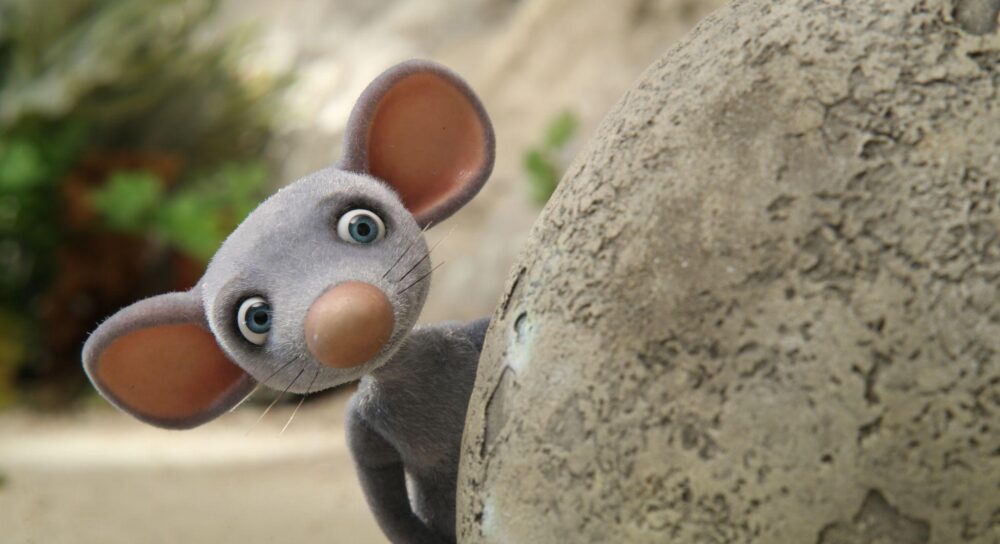 The husband and wife admit that they have always been drawn to the world of stop-motion filmmaking. “Stop-motion has a certain undoubtful charm,” says Bubeníček. “In the beginning, it was mainly Denisa who was sure about doing the film this way. Apart from being a director, a painter and an illustrator, she is also a puppet maker. She likes the real material and its textures, which allow you to capture everything on camera without losing any natural details or beauty.”

Grimmová adds, “The other reason to choose this technique was the legacy and tradition of the Czech stop-motion animation. To be able to appeal to the international audience. We couldn’t imagine achieving the level of the biggest international productions within our budget. The stop-motion technique is still quite rare in the context of international distribution, and it’s quickly identified among the other films. However, our project is not a pure stop-motion movie. To be able to fulfill the demanding script in terms of number of characters and diversity and scale of the environments, the stop-motion animation is mixed with an important dose of CG.” 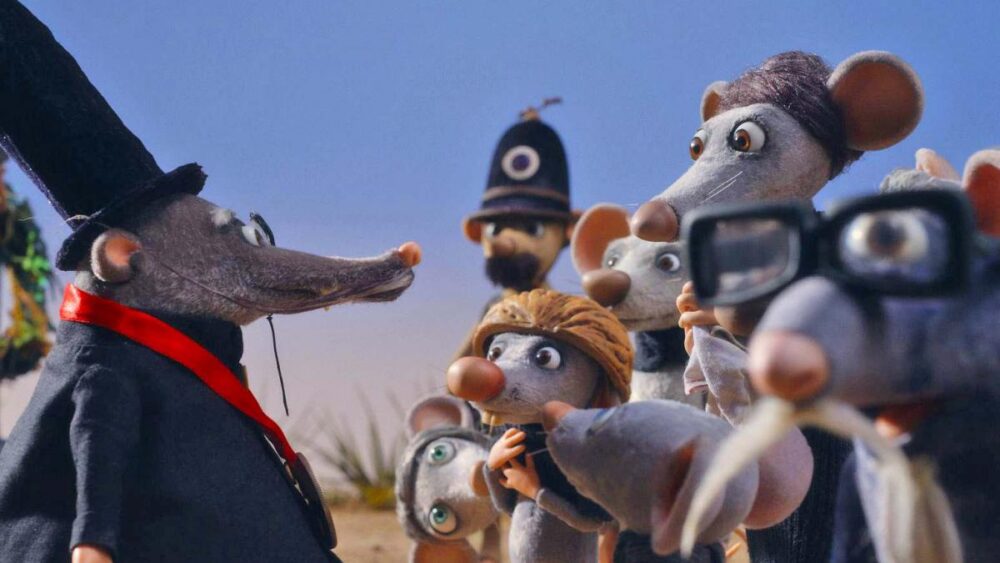 The duo also mentions that they are quite pleased with the state of European animation in 2022 and beyond. “There have been a number of beautiful European films released recently and we are delighted that European animation and cinematography as a whole has quite recognizable features and style. Regarding Czech animation, after two decades of feature film decline we are witnessing a rise again. This is great news. For a long time, only short films had achieved international acclaim, but in recent years, we have witnessed an increase in feature projects as well.”

As the movie is set to be released in more countries in upcoming months, the filmmakers hope audiences will embrace the deeper messages of their movie. “Our film is about humility, love and hope,” they note. “We are trying to say that all pain passes and behind every corner there is something new, a new friend, a new adventure. We want to show that there is no point in giving up. But that we should direct the strength and the ‘fight’ we have inside towards things that have meaning. Time is like a river moving ever forward towards eternity, turning the present into yesterday, and it cannot be turned back. On the other hand, though, there are lots of things that we can change — and that are worth fighting for” 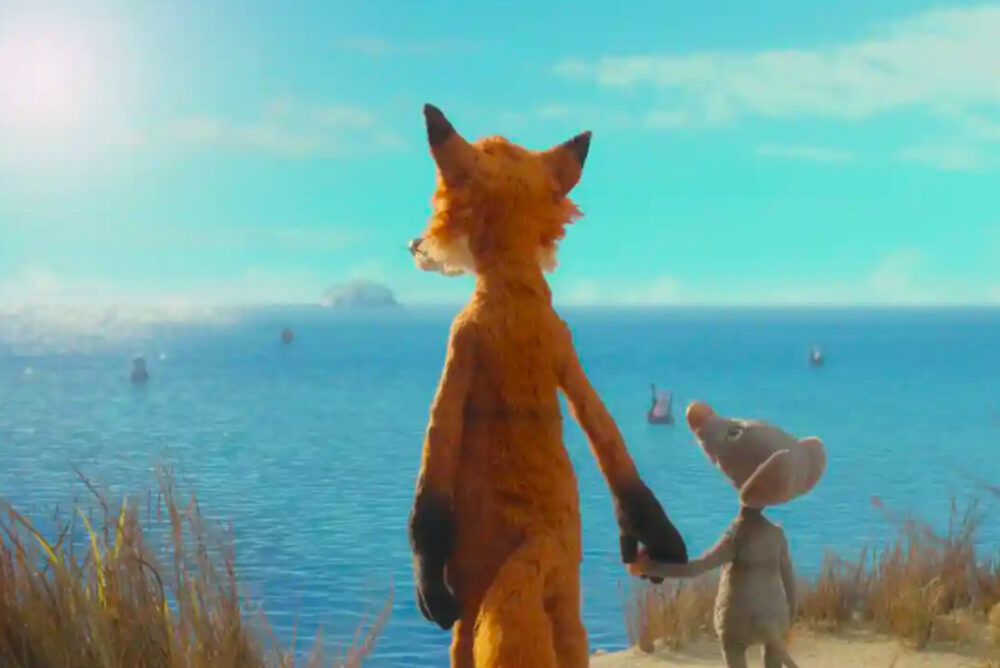 The filmmakers add: “We hope that especially children will take away several messages: That the entire universe is immense, harmonic and beautiful in its complexity, and that there’s always room for the hope that all will turn out well in the end.”

Even Mice Belong in Heaven is currently available on VOD in the U.S. on Tubi, Apple TV, Prime Video, Google Play and YouTube. For more info, visit micebelonginheaven.com.