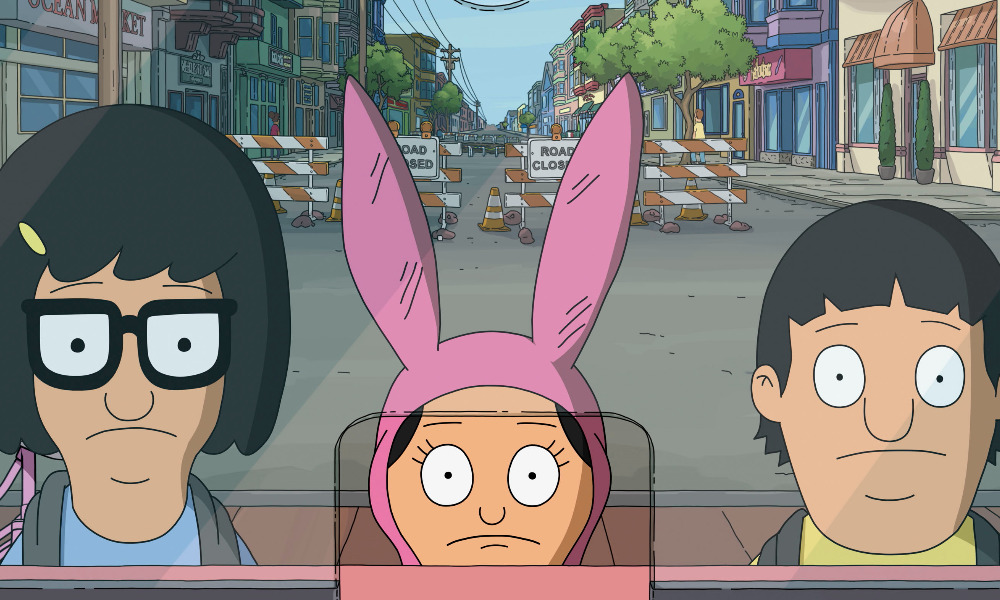 Fans of Bob’s Burgers, the multi-Emmy-winning animated series that has become a mainstay of Sunday night appointment viewing over its 12-season run, have been eagerly awaiting the Belcher family’s theatrical debut since the project was first announced in 2017.

An animated, big-screen, musical comedy-mystery-adventure extravaganza, The Bob’s Burgers Movie, which arrived in theaters on May 27, has a little of everything that you might expect: a crisis brought on by a ruptured water main; a mystery that could help save the restaurant; snappy, spectacular musical numbers and a big, healthy portion of heart.

But the series that excels at exalting the mundane also has a few surprises in store for moviegoers, including gorgeous widescreen visuals presented in a mix of CinemaScope and anamorphic formats, with the animation produced at Fox’s Bento Box Entertainment. 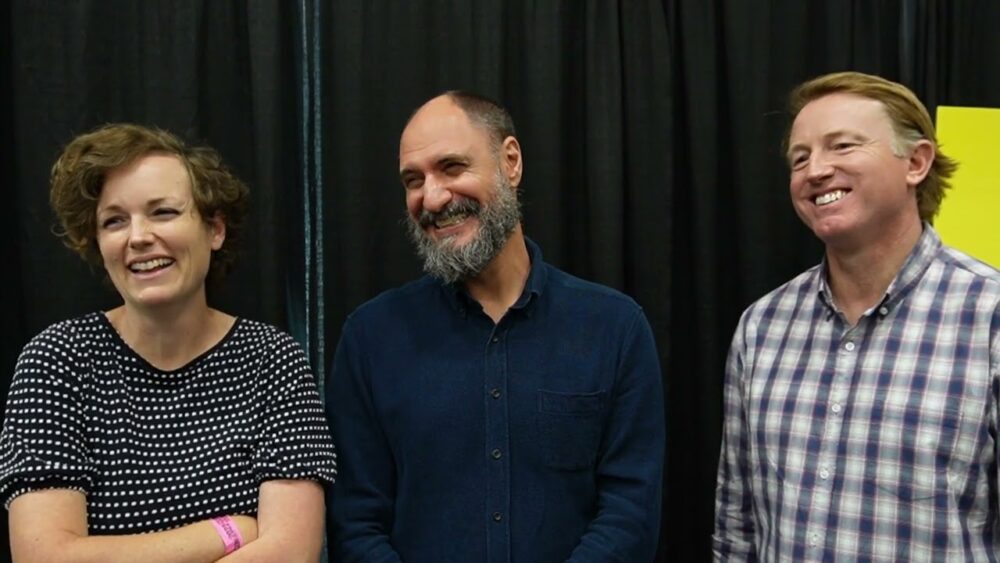 As supervising director on more than 150 episodes of Bob’s Burgers before he was promoted to producer after season 10, Derriman is steeped in the North Jersey Shore world of the Belchers. The Australian native began his career in animation at Disney Animation Australia in Sydney, working in television and features, and is also a consulting producer on Bouchard’s two newer series, The Great North and Central Park.

“When you meet a star player, you know it,” Bouchard says of working with Derriman. Bouchard is the creator of Dr. Katz, Professional Therapist, which launched in 1995 and ran for six seasons before he teamed up with Brendon Small to create the beloved but short-lived series Home Movies. “I feel that I’ve benefited in some ways from having done this job for many decades now,” he notes. “Bob’s Burgers is a little more than 10 years old, but I’ve been running shows in various forms for a lot longer than that — I’ve been working in this business since I was 24 years old. Now I really see how the work is important, but just as important is making sure that when you meet collaborators who are truly special, you ring all the alarms.”

The Belchers face their biggest, sink-holiest challenge yet in ‘The Bob’s Burgers Movie’

Derriman is a problem-solver, says Bouchard, who can easily communicate complex solutions. “If we were staring at an animatic and were concerned about a shot or a motion or the clarity of a moment, he would just do a little drawing. While everyone else was scratching their heads and trying to figure it out, he would be drawing. Then, he would put the Post-it on the table, and it was so obviously the right answer. Somehow, Bernard knew. He did it again and again and again, and it was thrilling because you realize, ‘Oh, we’ve got another one. We’ve got another person who is going to make everything better.’”

Initially brought on as a story artist, Derriman wasn’t heavily involved in the project from the beginning. “Unlike Nora, who was alongside Loren from the start, I’d started from Australia working as a board artist, and then became a supervising director,” he relates. “Also, Loren focuses more on audio. It’s his thing, and that was a big part. Visual, obviously, is my bag — so we fit well together.”

All in the Details

Led by Bouchard, Derriman says the production team pays an enormous amount of attention to designing even the smallest details seen on-screen to a level he hadn’t experienced prior to Bob’s Burgers. “For instance,” he says, “if Teddy’s got a drill and he’s in the background of a scene, it’s not like a board artist just draws whatever drill that comes to mind and that’s what’s in the movie. We’ll always be digging up references, and Loren will push everyone to do that.

“If something doesn’t ring true, it’s like, ‘I’ve never seen a drill like that before.’ We’ll go into it. Every aspect of the show, we have that little extra level of reality where we try to make the props they’re using more realistic, more believable.”

‘The Bob’s Burgers Movie’ showcases an advanced level of detail to the backgrounds, shading and props, bringing the familiar TV show world into a new dimension.

Bouchard and Derriman credit art director Phil Hayes (Bob’s Burgers, The Great North), who has been on the series since the first episode, and production designer Ruben Hickman (The SpongeBob Movie: Sponge Out of Water, Fantastic Mr. Fox) for elevating the series to a theatrical look. “Ruben is another star, another example of somebody you want to hold onto as tightly as you can,” says Bouchard. “It was like hiring Edward Hopper to work on the backgrounds for Bob’s Burgers.”

Adding light and shadows, Hickman’s early background drawings were so detailed they almost captured the look of the finished film. “Ruben’s first background was a new pass on the exterior of the school, and I still remember just being blown away when I saw it,” Derriman recounts. “I was like, ‘Holy shit.’

“They were like paintings,” he continues. “It was more about being very conscious of what time of day it was and how a cloudy day would change the look of the paint on the buildings. It was that level of detail, which we hadn’t ever done before, that really just took the look of the movie to a new level.”

Production designer Ruben Hickman and the creative team dug into the opportunity to add richer artistic detail to ‘The Bob’s Burgers Movie,’ such as the detailed shadows on this Wagstaff School exterior (Animation Magazine exclusive artwork, courtesy of 20th Century Studios).

A big part of bringing Bob’s Burgers to the big screen was creating a sense of spectacle, says Bouchard. “If you think of spectacle too simplistically and too bluntly, then everything gets overblown and it means nothing. But doing spectacle right — and I’m not saying we nailed it, although we absolutely tried — seems to be about finding dynamics within the form, the 90-minute movie that’s meant to be on the big screen with big speakers and hundreds of people in the room.”

But creating spectacle also meant creating balance, he adds. “You still need small moments, and even silence and quietness in your characters, too. That’s part of ‘spectacle.’ We were, and still are, studying how to create that feeling of an eventful story. How do you tell a story about a family that runs a restaurant — which is, by definition, a small thing? It’s designed that way. It’s a small restaurant and a small space. In the grand scheme of things, you might, I guess, say it’s small stakes, though it certainly feels big to the characters.”

The question becomes how to take all that and make it fill the screen with emotions and events so impactful audiences are pinned in their seats. “I can’t say for sure that we got there, because we haven’t seen it with an audience yet, but we certainly knew we wanted to try,” says Bouchard. “It’s what we’re interested in: How can we tell very small stories for the small screen and make them feel big, and how can we tell bigger stories for the big screen and make them feel huge?”

Bringing the Belchers into cinemas meant the filmmakers could devote more time to exploring the depths of each family member. “Because we’re a character-driven show, that means the characters have to have potential. There has to be more that these characters can do and say that they haven’t done yet, or that they haven’t done in a particular way or in a way that could surprise even us, the people who are responsible for coming up with the things that they say,” Bouchard explains.

“What was really a great pleasure about working on the movie was thinking about what the characters were expressing quietly on the series that they could express out loud and explicitly in the feature,” he adds.

John Roberts voices Linda, whose optimism and enthusiasm help keep the family on track, even if it takes a bottle of merlot to get there.

Linda, in particular, held the most surprise for the filmmakers. “When we looked at Linda, we realized what a force she was in this family — what an incredible, somewhat unsung hero she was,” says Bouchard. “It was about optimism and this hope and grit that she embodies minute to minute in this family. And they’re facing real challenges.

“When Bob loses his drive, when he no longer has enough reserves of hope and strength himself — what that looks like and what that marriage looks like, and how the kids fit into that, that was something that we were really happy to dig into and find more there than perhaps we even dared to hope for.”

In the end, Bouchard says, “Each character had to hold their own in this movie. We wanted all six of them, including Teddy, to really face their worst nightmare in a way where the most important part of themselves is challenged.”