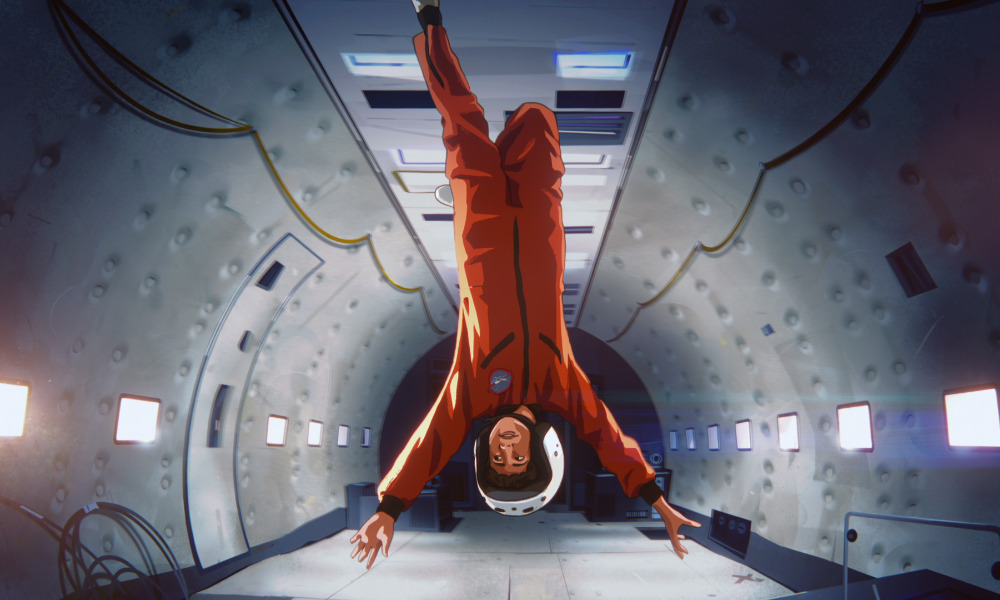 Tired of all those conspiracy theories claiming that the moon landing in1969 was faked; that it was simply a top-secret film production directed by Stanley Kubrick? If so, Oscar-winning filmmaker Richard Linklater has the perfect response: The Apollo lunar mission was indeed real … it’s just that the first person to leave footprints on the Moon wasn’t Neil Armstrong. Instead, it was an ordinary Texas fourth-grader named Stan. 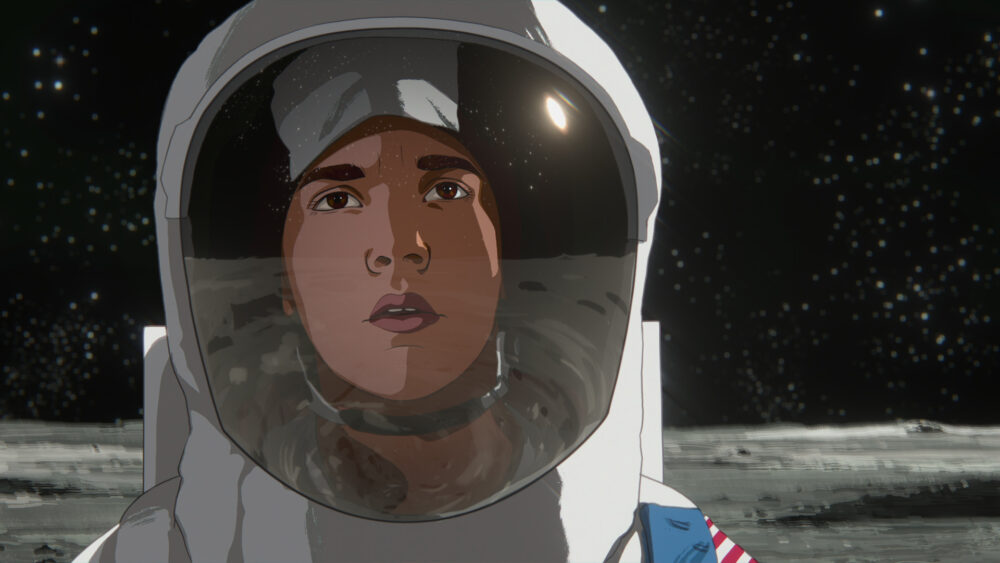 Known for both live-action films (School of Rock, Boyhood) and adult-oriented animated pictures (Waking Life, A Scanner Darkly), Linklater has crafted his latest movie, Apollo 10½: A Space Age Childhood, in his usual look, in which the character animation is drawn from live-action footage. He maintains, however, that this film is the most traditionally animated he’s ever done. “This one isn’t really a rotoscope movie,” says Linklater, who wrote, produced and directed the film. “It’s a 2D movie with elements of 3D. We called it 2.5D.” Still, a rotoscope process was used for the characters, if nothing else.

Set in 1969, Apollo 10 ½ focuses on the life of an average 10-year-old boy, who hangs with his friends, plays baseball and gets reprimanded by teachers for embellishing reality while speaking before his class. His family lives in Houston, which is blanketed with excitement for the lunar program. Then one day, Stan’s ordinary existence is interrupted by a couple of men in black who are scouting the perfect kid to send to the Moon. Why would NASA need to tap a young boy for the honor instead of any of the men who are already in the astronaut training program? After spending untold billions, the agency accidentally made the lunar lander too small for a grown-up to fit in. 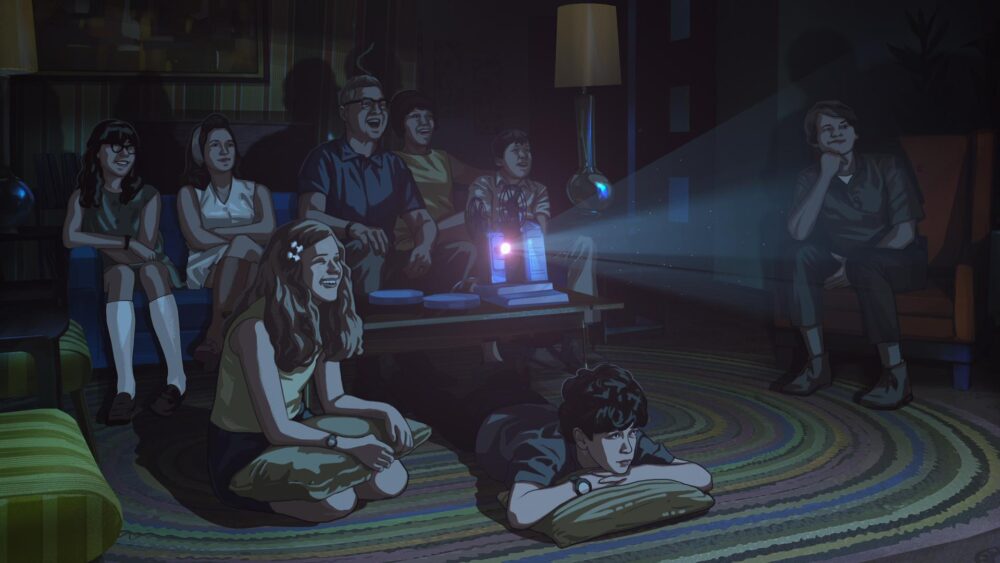 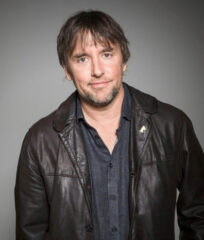 “They totally screwed up,” Linklater laughs. “They made one mistake. A kid’s logic gets you there pretty quickly without a whole lot of logic.” The idea for such an enormous fubar came from Linklater’s own experience growing up in the Houston area. “It was an actual fantasy I had as a second-grader. I was the kid who was always asking, ‘What if?’ and I remember asking, ‘What if they build the thing too small?’ My dad went with it.” Another prime example of “kid logic” is the explanation for Stan’s no-questions-asked disappearance while he undergoes the rigorous training program: he was shuttled off to “summer camp.”

While not completely autobiographical, the film — which is narrated in Wonder Years fashion by Jack Black as an adult Stan — is an exercise in nostalgia, particularly for anyone who grew up in the 1960s. Much of it takes place in the family’s home as they go through their normal, media-fueled routines, which include racing home from school to watch Dark Shadows, wondering why Peter Tork suddenly vanished from The Monkees and grimly watching the nightly news reports on what was happening in Vietnam. The live action was shot on a greenscreen stage at the Austin-based animation house Minnow Mountain using mostly local talent, including Milo Coy in the role of Stan. “He was not a professional actor cute kid,” Linklater says of Coy, whose soulful demeanor registers perfectly through the animation. “He was a real kid who wasn’t intimidated by much. I wanted kids who were just goofing around.” 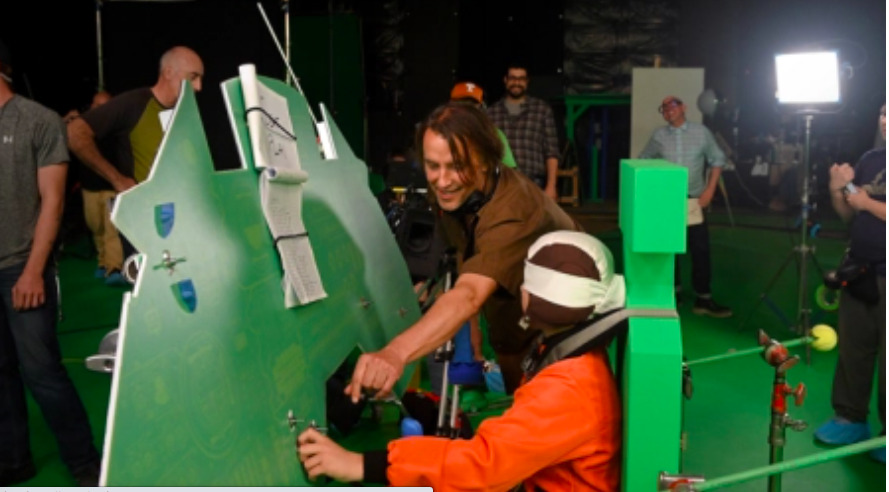 Both Linklater and producer Tommy Pallotta emphasize that unlike just about every other animated film, regardless of technique, Apollo 10 ½ was not pre-designed. “We approached this in a very organic way,” states Pallotta, who worked with Linklater on his two previous animated films, co-directed the 2014 feature Last Hijack and is an exec producer on Prime Video’s acclaimed animated series Undone. “[Usually] the pipeline, the design and everything is figured out before you start an animated film, but this was not done that way. We actually built it around the performances. That gave Rick the ability to be spontaneous on set.” Adds Linklater, “We could pre-viz it, but it wasn’t really pre-designed. We created a virtual environment for the actors to exist in, and then we designed that environment as we went. Every shot was a special effect.”

Once the performances were captured and edited, Minnow Mountain animators crafted the black-and-white line animation overtop using TVPaint. Then the footage was sent to Submarine in Amsterdam for all other aspects of production: ink-and-paint, shading, backgrounds, special effects, compositing and rendering. Some of the props, particularly in the outer space sequences, proved to be challenging, according to Linklater. “Things that were super-easy in live action would just be a killer in animation,” he says. “A helmet floating off was really hard to do.”

TVPaint was also used for finishing the animation and Blender was employed for 3D elements, such as vehicles, but Pallotta points out that digital animation was kept to a minimum. “3D was always our last option,” he says. “We put emphasis on the creative approach and if it took longer to do it in 2.5D than 3D, we still did it the 2.5D way. If you see water rippling or lens flares, all of those are 2D animated effects. We never fell into, ‘Well, it would be easy if we do it digital.’” 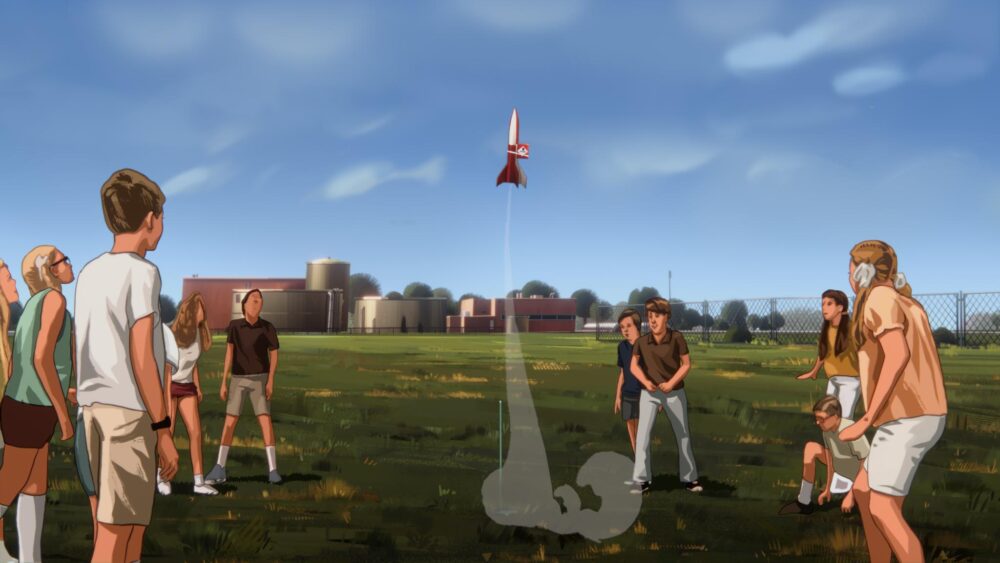 Both Linklater and Pallotta had a particular metaphor in mind while creating the film. “We had what we called a scrapbook approach to the animation,” Pallotta says. “We had a lot of reference material and the idea was that we were going to build it all together, but we noticed the scrapbook nature of our references with different aspect ratios and different resolutions. We started talking about how that was really nice in terms of how our memory works.”

Most noticeably, the archival footage that includes news clips of combat in Vietnam and Walter Cronkite’s actual newscast of the real Apollo 11 landing was rendered in a more painterly look than the main action. “There’s a pragmatic side to that, too,” Linklater notes. “A lot of that newsreel footage doesn’t have a really good line. It’s kind of blurry.” Says Pallotta: “It gave a lot more freedom in terms of how the artist approached it. When you go into social unrest, it’s dark and monochromatic, while the war part of it has a lot of faded green. We were trying to break from traditional production and character design and have that sort of creativity wherever we could, as long as it reinforced the story and translated that feeling to the audience in the quickest and most visceral way possible.” Excerpts from such TV shows as The Twilight Zone and The Beverly Hillbillies were also secured and animated to establish period atmosphere, a goal aided by including music of the era on the soundtrack.

By contrast, scenes of Stan’s school and home life were brightly colored, reflecting both the optimism of youth and the fragile confidence of pre-Watergate America, whereas the new scenes that take place inside NASA’s manned spacecraft center are darker and more highly contrasted. Those are also highly accurate, notes Linklater, a self-confessed NASA-buff. 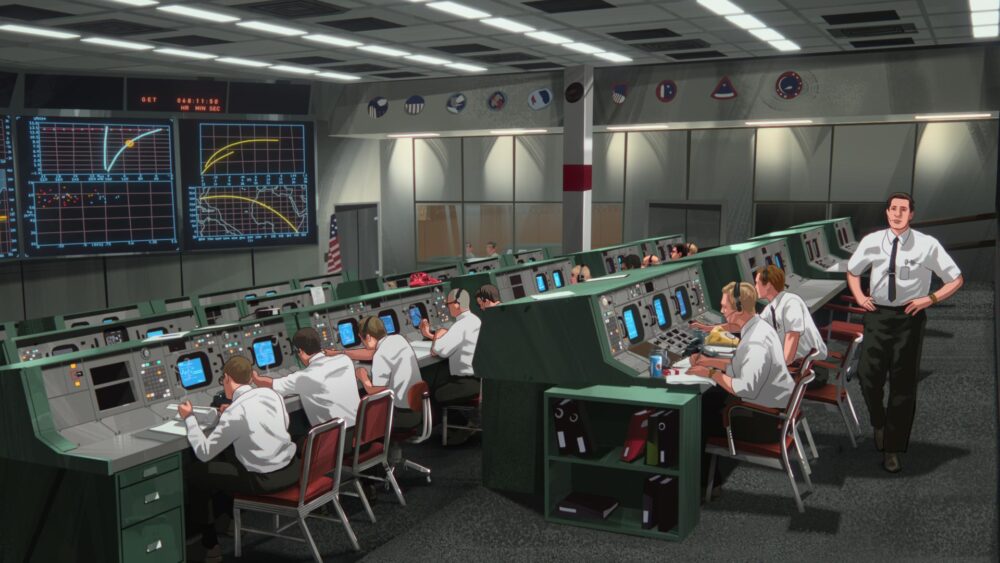 Somewhere in between is a sequence in which Stan and his siblings go to AstroWorld, an actual theme park outside of Houston, containing an extended scene inside the Alpine Sleigh Ride. “Oh, my God, we worked on that scene for nine months,” Linklater says, describing it as “super complex.” Shots of the tram barreling through the various environments of the ride could have been done digitally, but they weren’t. “We cut up the Alpine tunnel and put it in layers,” says Pallotta. “It’s in a 2.5D environment.”

Like all other film production over the last two years, accommodation had to be made for the pandemic, but here the filmmakers managed to luck out. The live-action shoot wrapped literally days before the shutdowns began. Meanwhile, animation production in Amsterdam carried out remotely by about 150 Submarine artists was accomplished without much of a hitch. “It was scary at first,” Pallotta says, “but by the end, it seemed natural. It did not compromise the vision.”

The movie premiered at the South by Southwest Film Festival in Austin on March 13, and will become available through Netflix April 1 (a fitting date given the semi-open question of whether the viewer is supposed to swallow Stan’s story at face value). It test-drove a couple of different subtitles on its way to distribution, and Linklater suggests yet another one. “It was a unique time and place to be a kid,” he says from experience, “so the subtitle of the movie might be, A Portrait of a Free-Range Childhood.”

Apollo 10 ½: A Space Age Childhood premieres on Netflix on April 1.