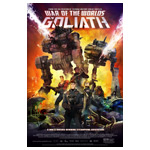 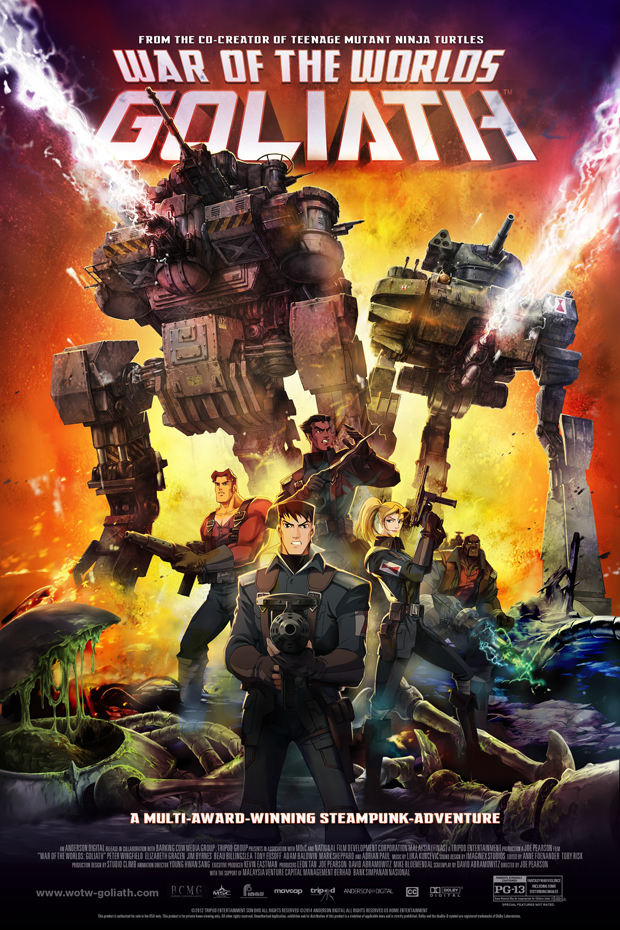 War of the Worlds: Goliath

You can’t talk about War of the Worlds — the seminal H.G. Wells science-fiction novel published in 1898 and a popular source for adaptations ever since — without getting into the concepts of longevity and perseverance. And no one knows that better these days than Joe Pearson, whose childhood obsession with the novel has yielded War of the Worlds: Goliath, an animated feature years in the making that is getting a limited one-week stereoscopic 3-D theatrical run starting March 7.

Fascinated by the book since the age of 9, a continuation seemed like the perfect project to keep busy the top-notch crew Pearson had assembled at Epoch Ink Studios after work ended in the mid-1990s on the TV series Captain Simian & The Space Monkeys.

A history buff, Pearson was drawn to crucial year of 1914 and the start of World War I as a starting point for a new take on the story, one that could incorporate iconic historical figures of the early 20th century.

“It almost wrote itself because you have historic figures like (Teddy) Roosevelt, (Nicola) Tesla and (Baron Manfred von) Richthofen you could plug into the story,” he says.

Pearson’s idea for War of the Worlds: Goliath saw mankind rebuilding its cities after the invasion in the novel, and preparing for the inevitable second round by assembling an international defense force called A.R.E.S. that would be based on the aliens’ technology and commanded by Theodore Roosevelt.

Selling the studios on the idea was not easy in the late-1990s, before the rise of Comic-Con made such material not just fashionable but the staple of summer moviemaking. So Pearson put it on the back burner and moved on to other projects including showrunning Roswell Conspiracies, where he met Teenage Mutant Ninja Turtles co-creator and Heavy Metal magazine publisher Kevin Eastman.

Together, they assembled a slate of direct-to-video animated features that included War of the Worlds: Goliath and sought investors.

“We were so close, so many times and we couldn’t quite get any closure,” he says.

The project was saved by Pearson’s chance encounter with Chinese-Malaysian businessman Leon Tan, who was a fan of Pearson’s work and Heavy Metal. Tan closed a deal to fund War of the Worlds: Goliath within a year, thanks to assistance from the Malaysian government and its interest in developing an animation sector.

Plans originally called for all the work to be hosted by a top CG studio in Malaysia, with the character animation done in Korea by Sun Min Image Studios. But when the Malaysian studio had to pull out because it couldn’t meet the demands of the production, all the work was shifted to Korea, says Pearson, with a number of core creatives going along with the show via a new company they formed called Studio Climb.

The planned two-year production grew to three years and high-quality results plus the declining DVD market prompted a jump from a 70-minute home-video release to an 85- or 90-minute limited theatrical release. That added another year to the production process, as did a 3-D conversion by BaseCamp Films in Malaysia. The budget, meanwhile, swelled to nearly $5 million from a starting point of about half that much, Pearson says.

The film has played at festivals since 2012, but it finally comes to a wide audience March 7 in a limited, one-week theatrical release in the United States, as well as VOD and iTunes. The Blu-ray and DVD release will follow on April 1.

“As a creative, it’s a real joy for me to actually see the film on the big screen in 3-D,” says Pearson. “It is the optimal way to see the film and to have that as an option for us here in the States is very gratifying.”