If you ever believed that our world is ruled by little forces of good and bad fortune, then Skydance Animation’s first feature Luck is the perfect pic for you. The clever and imaginative movie centers on a young girl named Sam Greenfield, who considers herself the unluckiest person in the world. When she accidentally stumbles into the never-before-seen Land of Luck, she sets out on a quest to bring some good luck home for her best friend. Of course, she has to team up with the magical creatures of this world to make her wishes come true.

The film is directed by Peggy Holmes, a Disney veteran who also helmed two Tinker Bell spinoff movies (The Pirate Fairy, Secret of the Wings) as well as The Little Mermaid: Ariel’s Beginning. “I was very excited to work on a completely original property at a brand-new studio,” she tells Animation Magazine during a recent Zoom interview. “I’ve been working on this movie for about two and a half years,” she noted. “I was developing a TV series at Skydance when they asked me to come and lead the movie.”

She adds, “There were two things that were part of the project that really appealed to me: this idea of Sam having grown up in the foster care system and that a leprechaun was involved. I come from a really big family and belonging to the family is the most meaningful thing in my life, and I could see that creating a story around Sam who has this emotional journey of finding her own family. And the leprechaun! I’m partly Irish and thought I could really blow it up and develop this leprechaun character into a full magical world called the Land of Luck. So, I told them if I could create this deep, heartfelt journey in a super magical world, I’m in. And they said, ‘Let’s go!’” 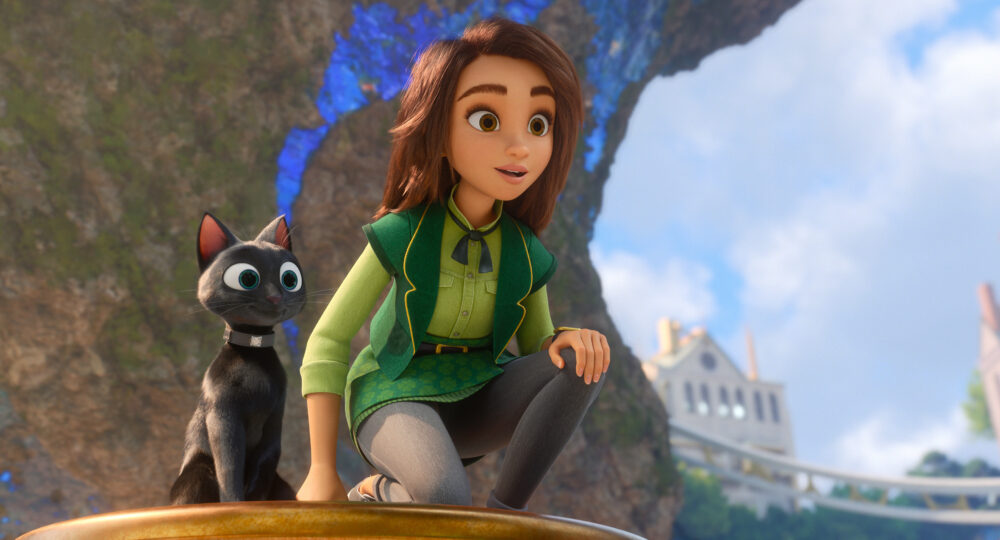 Holmes says she looks back fondly at her time at Disney. “I loved my time at Disney. I was an actress, dancer, choreographer and director,” she recalls “Over at Skydance, we are a brand-new studio. We get to help build the studio from the ground up. Every day, we are learning something new and everyday it’s super challenging. It was exciting to be working with producers John Lasseter, David Ellison, Dana Goldberg, David Eisenmann and [Skydance Animation president] Holly Edwards and be part of building something from the beginning.”

The film has had a complicated development history. It was first set up with DreamWorks veteran Alessandro Carloni (Kung Fu Panda 3), with a script by Jonathan Aibel & Glenn Berger. Then, when John Lasseter joined the studio as CCO after leaving Disney-Pixar, he tapped Holmes to take over the project, and writer Kiel Murray (Cars 3, Raya and the Last Dragon) was also brought on board. Actress Emma Thompson was also attached to the project, but she quit the movie in early 2019 to protest Lasseter’s new position at the studio. 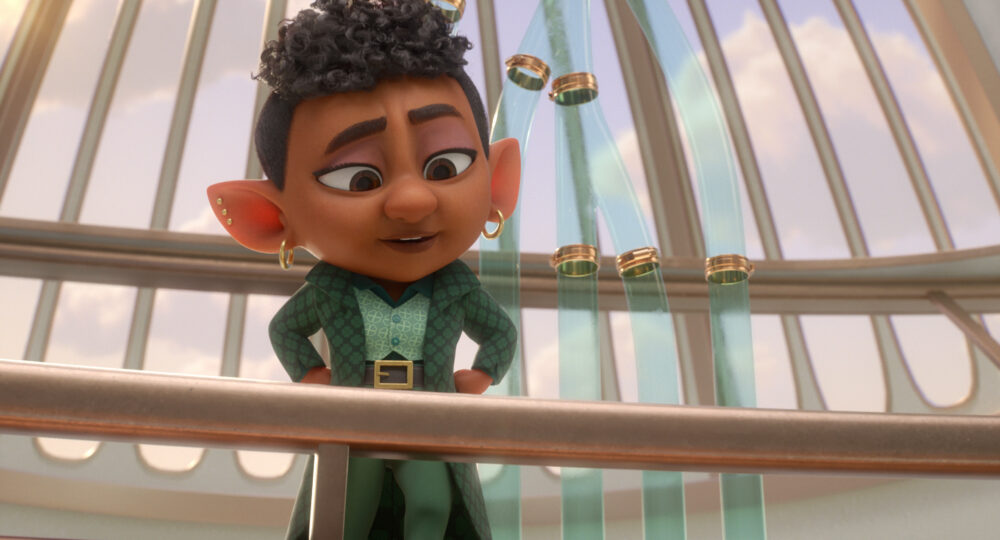 Whoopi Goldberg as The Captain in ‘Luck’

Having worked with Lasseter on the Tinker Bell movies, Holmes was pleased to be working with the former Pixar and Disney CCO once again. “John is a great mentor, ultra-creative artist and he’s a master storyteller,” she says. “He always has these great ideas and is there when you need him. He’s a partner in the best way: He’ll say come to me with your story problems and I’ll help solve them for you. He’s been very supportive.”

The director mentioned that one of the big challenges of mounting the movie was coming up with a storyline that wasn’t forced and didn’t hit the audiences with its positive message of building your own luck. “Our writer Kiel Murray and I did a lot of research for the project and we met with these incredible young adults who had also grown up in foster care and had the same experiences at Sam,” recalls Holmes.

“When we spoke to these people, no matter how much bad luck they had had in their lives, they were so positive and kept going,” she adds. “They were so generous at heart and Kiel and I were so moved by their stories. They told us that they didn’t wish bad luck on anyone else and they wouldn’t want to live it again, but looking back, it made them who we were. That’s what Sam needed to learn. We want her to look back at her life and say, ‘What I thought was the worst luck ever, turned out to be the best luck because I finally found my family!’” 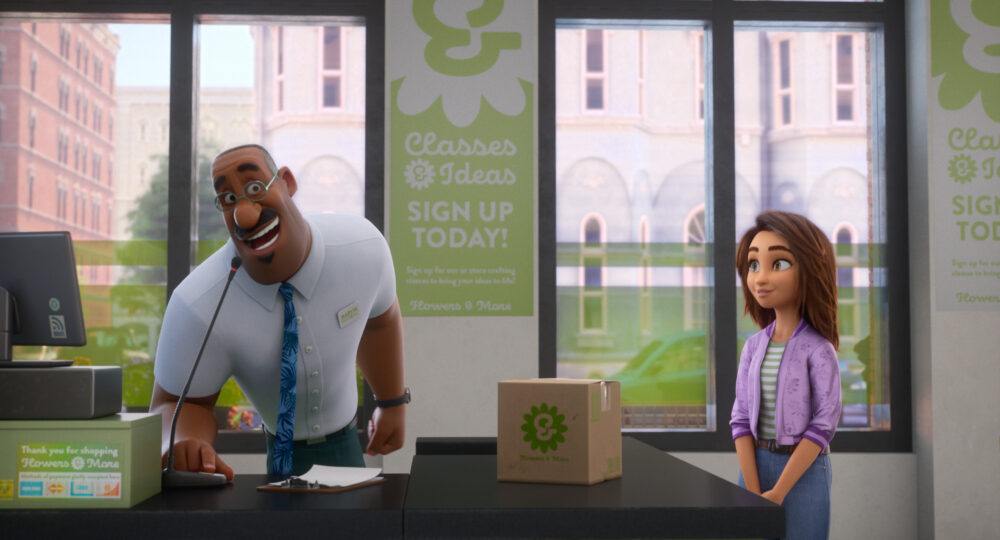 Holmes worked with the Skydance artists located in three different locations: Los Angeles, Madrid and Connecticut. “We have CG animators, layout and VFX artists and lighters in Connecticut. We were lucky enough to grab the artists that were available after Blue Sky’s closure in the region.”

The director says the overall look of Luck owes a lot to the film’s talented production designer Fred Warter, whose many credits include A Goofy Movie, 9 and Secret of the Wings. “The first artwork he did for the movie depicted two worlds on either side of a coin — good luck on top and bad on the bottom,” she recalls. “It was a wonderful globe-like creation and I said, ‘OK, now we have to build the world based on that — a world where everything is timed perfectly, and our artists were fed with these cool concepts.”

“Creating these two fantastical worlds provided us with many challenges,” says animation director Yuriko Senoo, who was also animation supervisor on Skydance’s acclaimed 2021 short Blush, and worked on features such as The Star, The Pirate Fairy, Tangled and Bolt. “In the ‘Good Luck’ world, everything happens perfectly and the transportation comes to you. You step on a disc and it carries you to your destination, so the timing has to be absolutely perfect and easygoing. In the ‘Bad Luck’ world, everything goes wrong. The buildings are in constant need of repair, etc. But it was important that all the Bad Luck characters were not portrayed as scary monsters. They love their jobs, too. We wanted to show that you need both bad luck and good fortune to keep the world in balance.”

Senoo says she and her team were inspired by the great classic comedians of TV and movies’ golden age. “We looked at the work of stars such as Lucille Ball, Carol Burnett, Charlie Chaplin, Buster Keaton and Donald O’Connor because they were such great physical comedians and could make us laugh without saying a word — simply by using their bodies and faces,” she explains. “We were really drawn to those simple poses and expressions. We wanted to keep Sam in a more real and natural animated world, where less would be more. I also looked at my own daughter for inspiration, since she was transitioning from high school to college, just like our movie’s heroine was going through some big changes.” 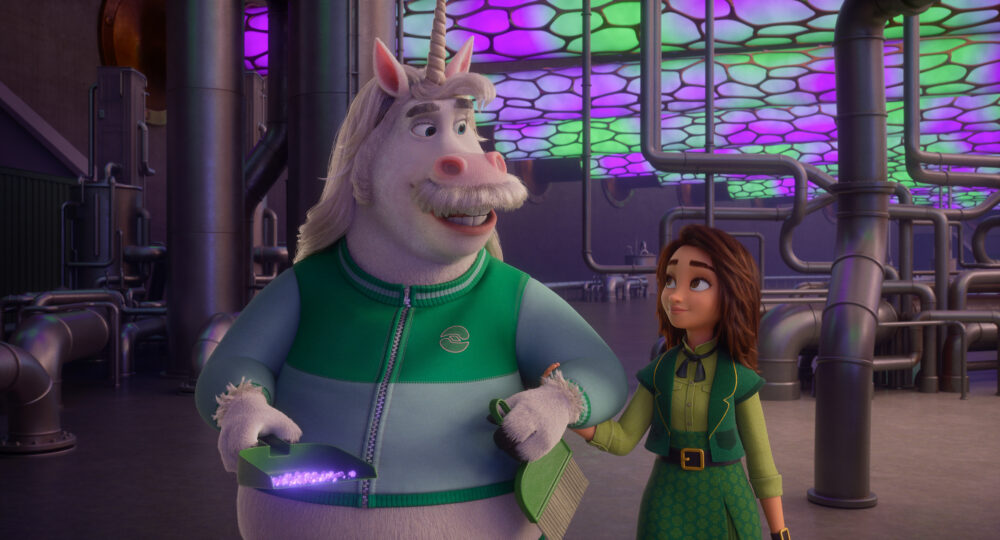 Fans will recognize Flula Borg (Jeff the Unicorn) as one of the film’s distinctive voice stars.

The animation team was also fortunate to have an amazing roster of actors lending their voices to the films’ characters: Eva Noblezada as Sam, Jane Fonda as The Dragon, Whoopi Goldberg as The Captain, Simon Pegg as Bob, Flula Borg as Jeff the Unicorn and Lil Rel Howery as Marv, to name a few. As Senoo points out, having stars like Fonda, Goldberg and Pegg helped them get a solid grasp of the character’s traits. “The live-action footage helped us enormously,” recalls Senoo. “We also looked at some classic dragon animation references. Our Dragon has six legs and no wings, and she’s a powerful but caring boss, so she can relate to the leprechauns, the pigs and the bunnies. There was a challenge to keep in mind the size differences between her and all the other characters, too.”

When asked to pick her favorite sequence in the movie, Senoo says it’s very difficult to point to one scene because she’s very proud of all the work the team has been able to deliver. “Every scene brings up different kinds of memories and it’s been a great collaboration between our teams in Madrid, Connecticut and Los Angeles,” she says. 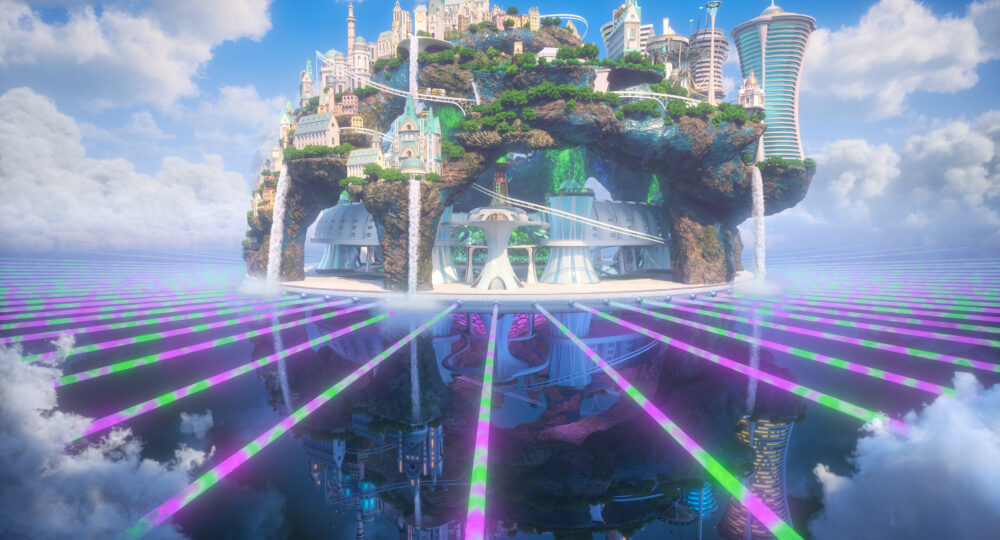 The Skydannce Animation team designed ‘Luck’s lands of good and ill fortune like the two sides of a coin, inspired by a concept by production designer Fred Warter.

“I do love the sequence where Sam chases after Bob to get a lucky penny, because we can see Sam’s physical comedy with bad luck vs. Bob’s physical comedy with good luck,” Senoo adds. “The contrast is fun to see. We can also see good luck and bad luck contrast with Sam in her apartment and work the day before without a lucky penny, and then the next day with a lucky penny. It’s so entertaining to see them. I can watch them over and over and enjoy every time. I also love the ending sequence — but that’s for everyone to find out what happens!”

Both Senoo and Holmes say they hope audiences will ultimately have a great time watching the movie and take to heart its subtle messages. “We worked really hard to relate the message that luck is a complex idea, and that both good and bad luck are made,” says Holmes. “We created the logic and rules of this world in a way that would be entertaining and organic. And in the end, we wanted Sam to look back at her life and realize that she thought she had the worst luck ever. But it turned out to be the best luck, because she finally found her family. Judging from the early screenings we had, the payoff has been great, because people are relating to her in a very positive way.”