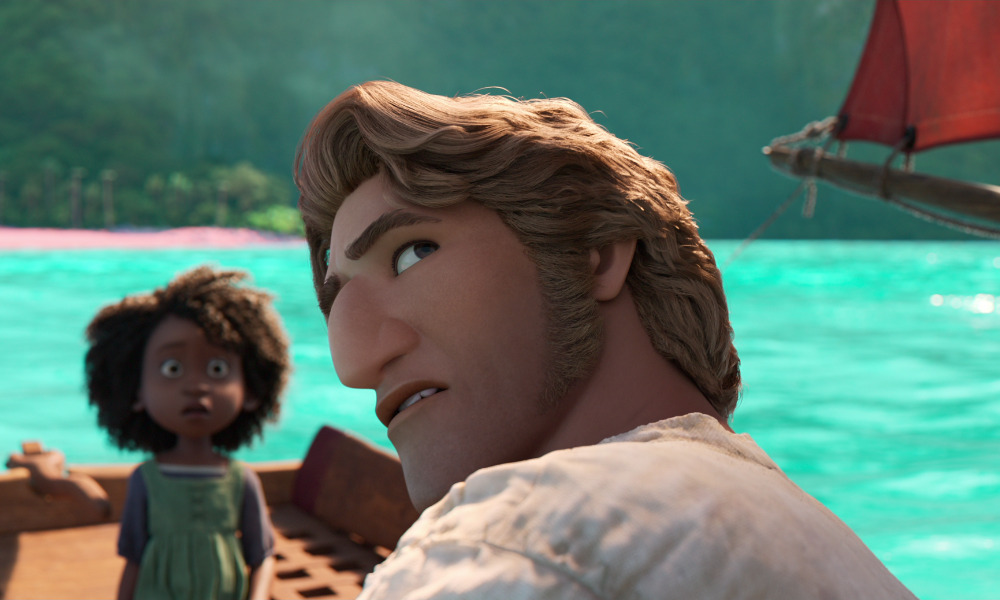 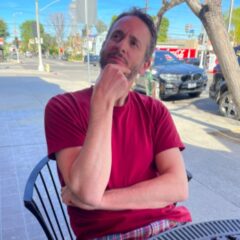 Big Hero 6 director Chris Williams is no stranger to the ocean, having also co-directed 2016’s uplifting Disney musical adventure, Moana. Baymax and a whaling harpoon are propped in the corner of his studio — both past and present reminders of his work — and it is already clear, as he begins to talk about his new animated feature for Netflix, The Sea Beast, that there’s a genuine sense of nostalgia coupled with his love of big movies.

Ancient myth and Melville are inherent within such seafaring stories, but it was specifically from the uncharted maps of tall sailing ships (and taller tales) that Williams’ leviathan passion project grew. As much a Star Wars fan as the next person, it is his admiration for the ’76 King Kong and Raiders of the Lost Ark that provide more personal touchstones. At its colossal heart, The Sea Beast is all about such epic productions and a return to classic storytelling. “That to me is always compelling and I guess I really had the desire to take on a movie like these,” he notes.

Of course, there are the movies… but then also Williams’ curious fascination with old maps, especially the empty parts; those less familiar regions. “I found the ‘nothingness’ more compelling,” the director admits. “There was something revealing about human nature that we wanted to make these areas more exciting and more dangerous, marking them with monsters.” So, heading off into the unknown world, he embarked on his own journey to tell a big adventure story. The difference here is that the sea monsters on the map are real… 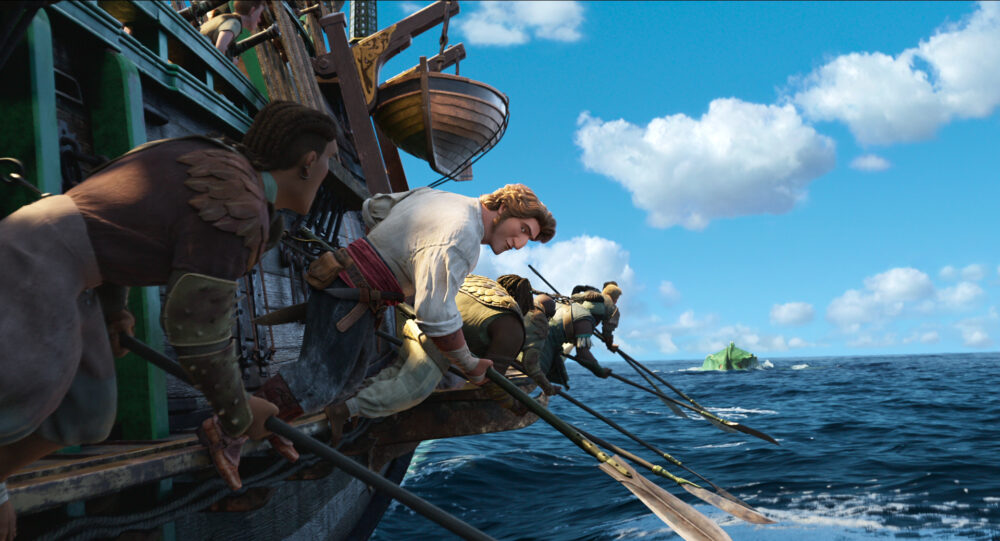 As one of the first projects to be greenlit by Netflix Animation, The Sea Beast took three and a half years to produce. With no beat missed during the pandemic, Williams admits early development helped a great deal, “I love the feeling of camaraderie and collaboration, so it was a challenge to form that relationship and challenge each other remotely. But people were invested early on and we hit our stride, making a movie big in scope and its ambition.” 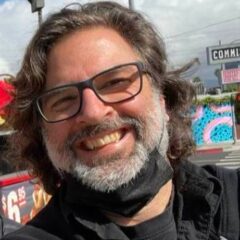 Around 400 people worked on the film, 10 of whom were directed by production designer Matthias Lechner (Zootopia, Encanto). Williams’ experience was staring through his screen for two years, working with Lechner, the rest of his Los Angeles team and Sony Pictures Imageworks in Vancouver, who provided the animation and visual effects. Lechner goes on to highlight, “Any movie is a prototype. So, you don’t know exactly where you are going until you get there. A lot of my job is to look into the director’s mind and ask the right questions. Unfortunately, you are an expert on this at the end of the movie and not at the beginning. But Chris is an excellent communicator.”

It seemed to be all plain sailing — production designer in sync, director at the helm — following the same map from the beginning with their initial artistic references. These included: N.C. Wyeth, Frederic Remington and the Hudson River School movement; all of which captured the bold colors and spirit of the great outdoors they were looking for. “These painters were the original jumping-off point,” notes Lechner, “I didn’t want it to look staged, so I had to find other ways of bringing color in there; a filtering of light. The other key artist was Caspar David Friedrich, who painted these huge canvases like early forms of cinema.”

Lechner’s continual effort was to move more towards this realism rather than lean too heavily on an illustrative style, “Because the story, at its essence, is a seaman’s yarn, a tall tale, I really wanted to ground the film in reality. Character-wise, the animation is more controlled, more subtle, pushing it towards that reality.” Balance was key; a challenge especially in how far they would take the facial features — large eyes or small eyes, how much skin texture, etc. — constantly aware of the uncanny valley. 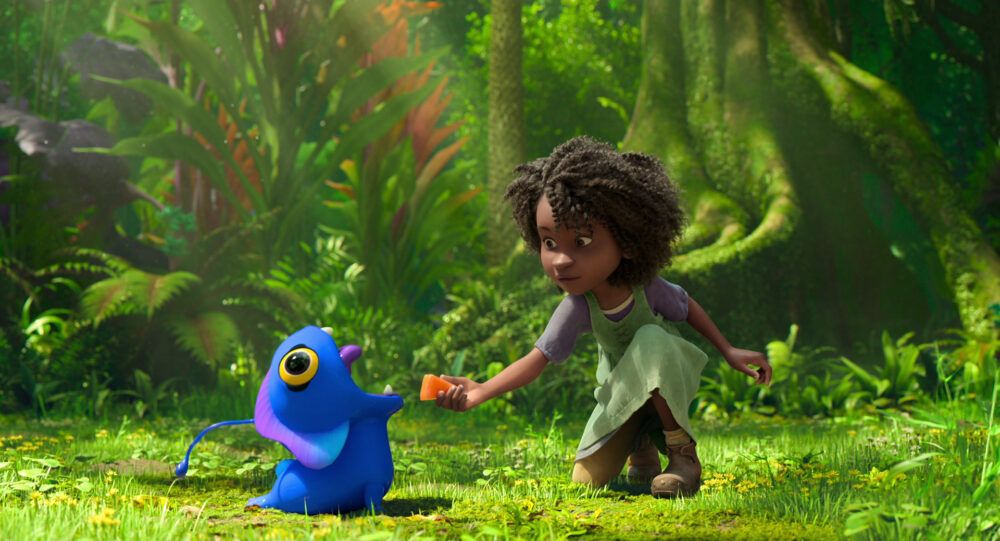 After 25 years at Disney, Williams says he was ready for new challenges. Free of a house (and mouse) style, his potential behemoth had been growing for a decade and seemed the perfect fit for the newly established Netflix Animation studio, and so, he made the move. Having cut his teeth as a storyboard artist on Mulan and The Emperor’s New Groove, the most important part for Williams has always been in developing the story. “For me, the story room and editorial bay is the place I am most comfortable and most effective and so, obviously, when starting at Netflix, we had to hire both a story and visdev team.”

Williams takes great pride in fostering an environment where people can feel comfortable launching ideas and able to challenge the story. This was crucial as there was a desire from the offset to make something different in tone based on what he had worked on before. “I wanted more of a sense of peril than you normally associate with feature animation. That was a goal from the beginning.” 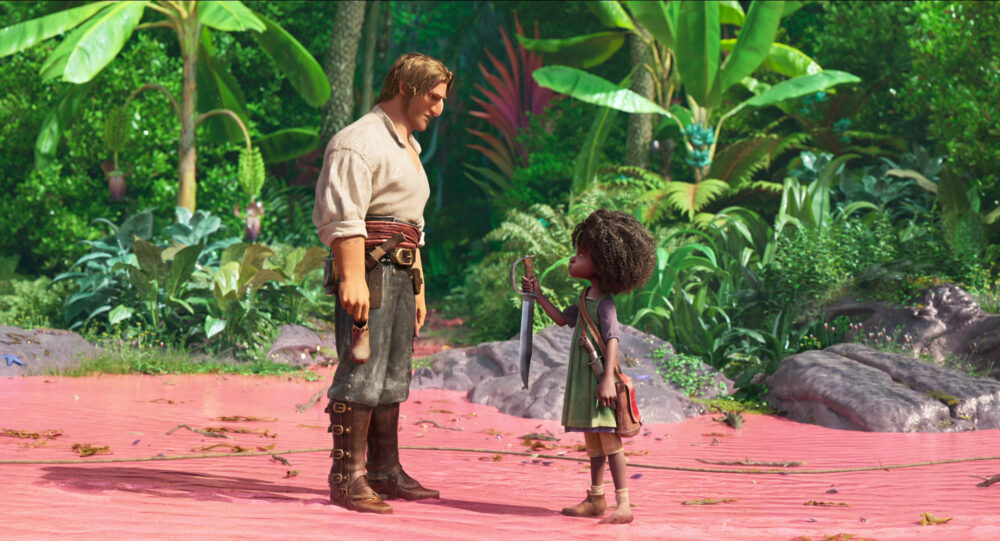 In ‘The Sea Beast,’ Maisie stows away on Jacob’s boat hoping to become his monster hunting apprentice. [Netflix © 2022]

Never letting insecurity or ego get in the way of someone else’s “amazing idea,” Williams gathered his team around and facilitated open discussions that were a natural part of the process; “The story can only get better and better if you’re open to other options. You’re always chasing the best possible version of the movie.” Screening the boards is another part of this development process. “It’s not the movie at this stage, just a tool. This is the scaffolding, a high vantage point. ‘Is this the best structure?’ ‘Is this character’s personality, right?’” he explains. “Some [directors] make the mistake of feeling like this is the movie and want to protect it.” A film’s language and narrative should change once new life is breathed into it. This, Williams more than understands, is what helps these “imagined worlds” become more believable.

The imagined world of The Sea Beast had to be just as immersive. “Certain examples like The Lord of the Rings trilogy and Blade Runner, there is a sense that you are being brought into a complete world. The filmmakers understood its history, what was going on before we entered it and what is happening beyond the frame.” A more specific (and major) influence on this outlook and approach was Peter Weir’s 2003 film, Master and Commander: The Far Side of the World. “We wanted to get a sense of what life was like on these ships. That is a lot of the experience of Master and Commander; this thrill in understanding the mechanism. How the ship works.” 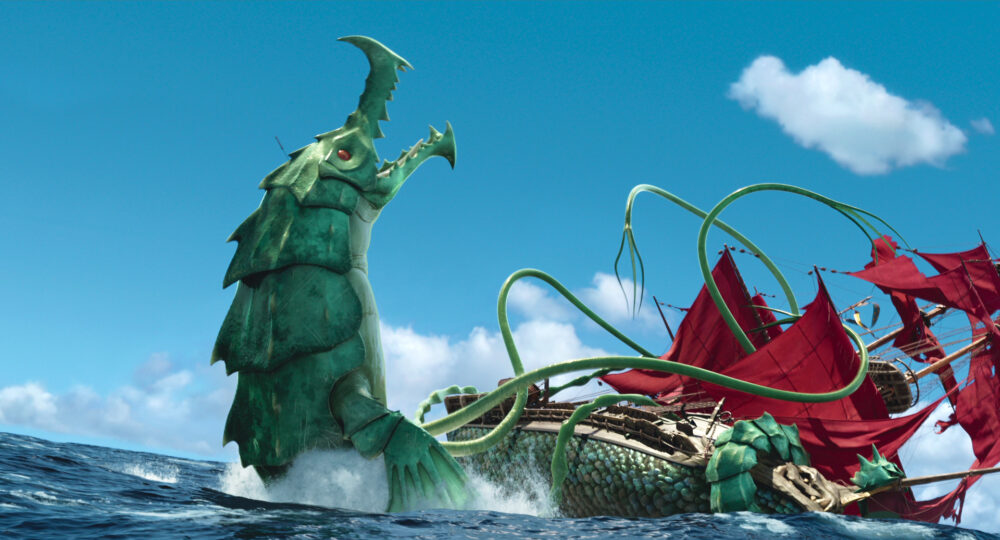 This Commander and his crew were ready to make their own waves. Yet, Williams — despite his previous Polynesian adventure — is the first to admit he still knew little about life at sea. Therefore, the research was taken as seriously as it should have been. Detailed diagrams of ships, photography from books, hired experts and organized visits to Naval museums and the HMS Surprise (the ship used in Master and Commander) were the most essential references for early development.

Lechner adds, “Our effects supervisor grew up on a ship, so we had a good handle to start with. It was important that the details worked; that the sailing maneuvers were performed properly. Even just learning the terminology to communicate with the artists.” In their efforts to give this constant feeling of immersion and authenticity, it had to be earned — everything from how the crews worked to chain of command, navigation and wind direction were a necessity — a building block for the story and the ship itself. 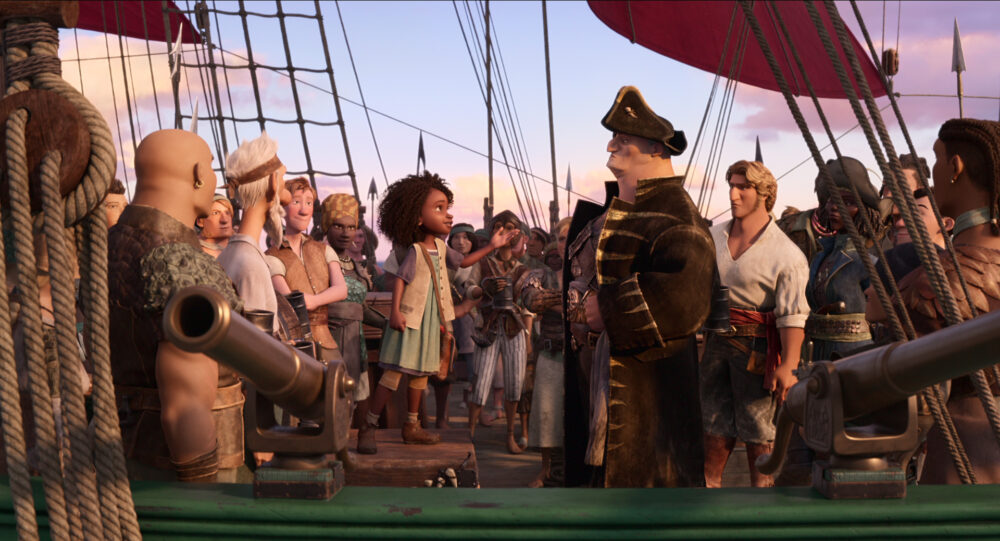 Built in Maya, it came with a particular set of challenges. “What was really hard were the sails, for some reason,” highlights Lechner. Williams adds, “It was important that no matter where the camera was placed the sails were in the right direction. It seems a minor detail to most, but these things don’t just happen; people are really into this. Will ‘ship people’ — if they watch this movie — will they think we got it right? That was our goal. Even if you know nothing about it, there is a sense that it feels authentic because we have paid so much attention to the details; from the salt stains to the sun damage.”

Over a three-month period, Lechner directed his artists and designers predominantly via Sketchup, breaking down the environments — such as the huge palace — into separate pieces for them to build on. Color keys were the jumping-off point and an imperative part of Lechner’s design process, informing the lighting and construction of scenes; “I try and improve the image artists and designers are working on,” he says. “That makes them feel more involved in the project; that they care about it. I am hoping the audience cares just as much and comes out of this movie having loved the colors. That was a really important part for me.”

From the subtlety of such (seemingly) tiny details to the sheer size of it all, another major focus was scale. “This was the biggest challenge,” states Lechner. “We had to figure out how to texture the beasts, especially seen both close up and from a mile away.” 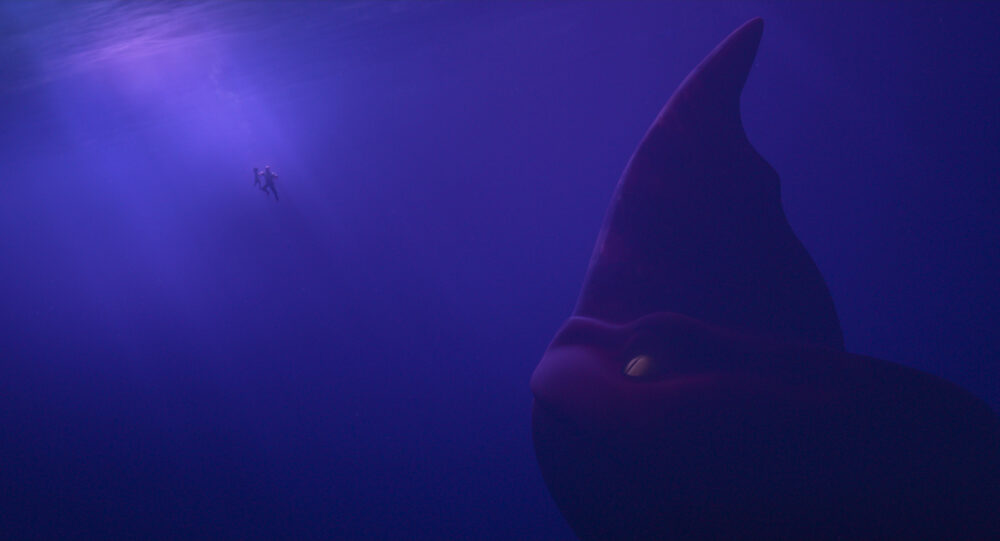 The huge size of some of the creatures proved a challenge for ‘The Sea Beast’ creative team, as well as for our heroes Maisie and Jacob. [Netflix © 2022]

Andrea Blasich — a visual development artist specializing in sculpture — modeled several clay versions that became an integral part of working out the details and reference points. Starting with a rough full body, while refining, he used the right side of the model to show the muscle structure and the left to show the skin surface. Next, larger sculpts of the head with the mouth both open and closed were created. Blasich then 3D scanned his sculptures, cleaning them up at the highest resolution. The final digital models were all part of the design package delivered to Imageworks, who remodeled once more, translating them for animation.

A colorful epic adventure on a large scale, The Sea Beast is about to set sail and, for all it has to offer, also aims to become part of the growing push to show what animation can be while navigating such a vast ocean of uncharted ideas.

The Sea Beast premieres on Netflix on Friday, July 8. (netflix.com/theseabeast)