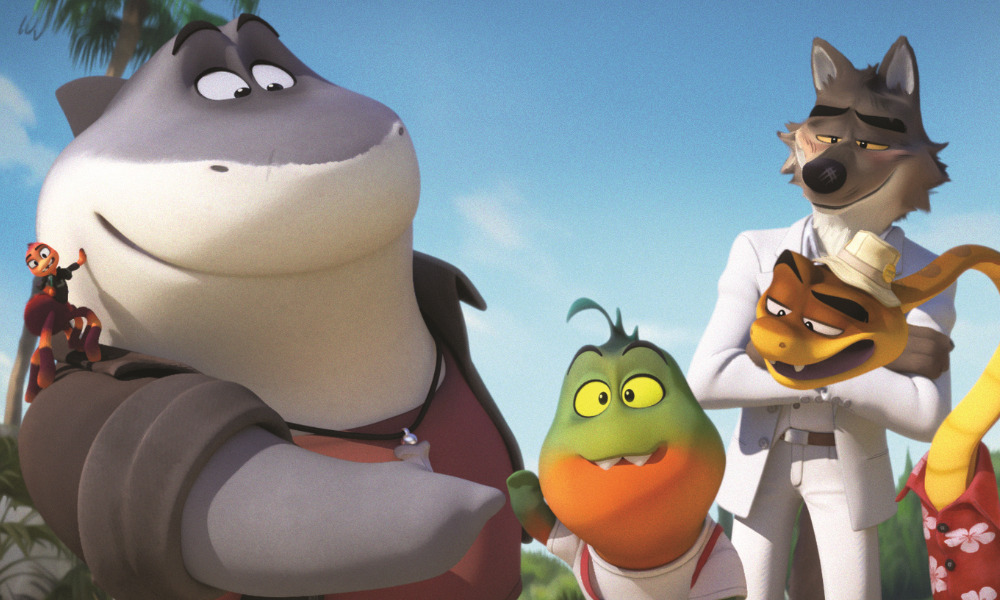 If the new DreamWorks feature The Bad Guys awakens fond memories of the best heist movies in the history of cinema, the film’s director Pierre Perifel, screenwriter Etan Coen (Tropic Thunder, Idiocracy, Madagascar: Escape 2 Africa) and producers Damon Ross and Rebecca Huntley will be very pleased. Not only does the charming new caper takes audiences on a wild ride full of unexpected twists and turns, it also works as a cool homage to some very grown-up movies — including Heat, Oceans 11, Snatch and Pulp Fiction.

‘The Bad Guys’ pays homage to heist classics like ‘Oceans 11’, in an animated Los Angeles inspired by ‘Reservoir Dogs’ and ‘To Live and Die in L.A.’

Perifel, the film’s French director who is best known for his acclaimed shorts Bilby and Le Building, says he was instantly drawn to the project when he came across the books by Aaron Blabey. “It was an immediate attraction for me,” he says. “The film has a great concept and it mixed two of my favorite things: heist movies and anthropomorphized animals. Damon and I talked about making an Oceans 11-type movie for the whole family, so I helped create a trailer using storyboards. Our production designer Luc Desmachelier was also already attached. After we pitched it to Margie Cohn and Kristin Lowe [DreamWorks’ president and CCO] , they really liked it and greenlit it as the first original feature at the studio under their leadership.” 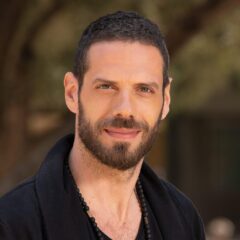 For the director and his team, which also included art director Floriane Marchix, VFX supervisor Matt Baer, head of look Jeff Budsberg, head of story Nelson Yokota, editor John Venzon, sound supe Julian Slater and composer Daniel Pemberton, it was important to keep the tone of the movie light and breezy, while paying homage to the best of the heist genre. “I was surrounded by a dream team of writers, artists, technicians and producers who I knew would turn it into so much more than what I could have ever imagined,” Perifel says. “The imagery of the film is mind-blowing, fresh and playful — and the credit goes to the entire crew of visionaries that challenged the CG pipeline to pull out unique visuals and made the look of this film the ultimate reward of two years of intense production.”

The film’s snappy and visually stylized look owes a lot to some of Perifel’s beloved Franco-Belgian comics and artists that he grew up with. “You can see a lot of Hergé, Uderzo and Moebius — but there’s also Luc Besson, Guy Ritchie and Steven Soderbergh and Quentin Tarantino,” he notes. “In terms of the overall look, we were longing for something different from what had become customary in CG animated films. When Sony’s Spider-Man: Into the Spider-Verse came out, we all felt that someone was finally doing something to change the status quo, what we had seen coming out of the big U.S. studios for many years. I think that opened the door for us. That’s how we were able to pitch something that was more illustrative and stylized and not going back to the same old character designs that we have seen before.”

Achieving that desired 2D look was not an easy task. “All the big studios are equipped with proprietary rendering tools and ray tracing,which forces the light to react in a way that mimics the physical world accurately,” he explains. “We are also used to these surfacing and texturing tools that give us very realistic images. We had to revert back to more traditional ways of animating to stray away from these photorealistic visuals computers give us. I wanted everything in our movie to feel gritty and lived in, so we had to add a lot of brush strokes and line work on top of the images. Everything becomes more complicated when your camera’s moving through, so you have to ask, how do you map this? How do you make it more flexible?”

The film’s graphic style also impacted the character designs. “We needed to rework the design style to make it work in this world as well,” notes Perifel. “For example, I didn’t want those big, big pupils that we always see in the movies; I wanted the characters to have very simple, bean-shaped eyes. I wanted to keep a painterly feel for the characters’ fur while keeping the rest of the visuals very graphic. We also had to bring back 2D effects to blend with particle generators.” 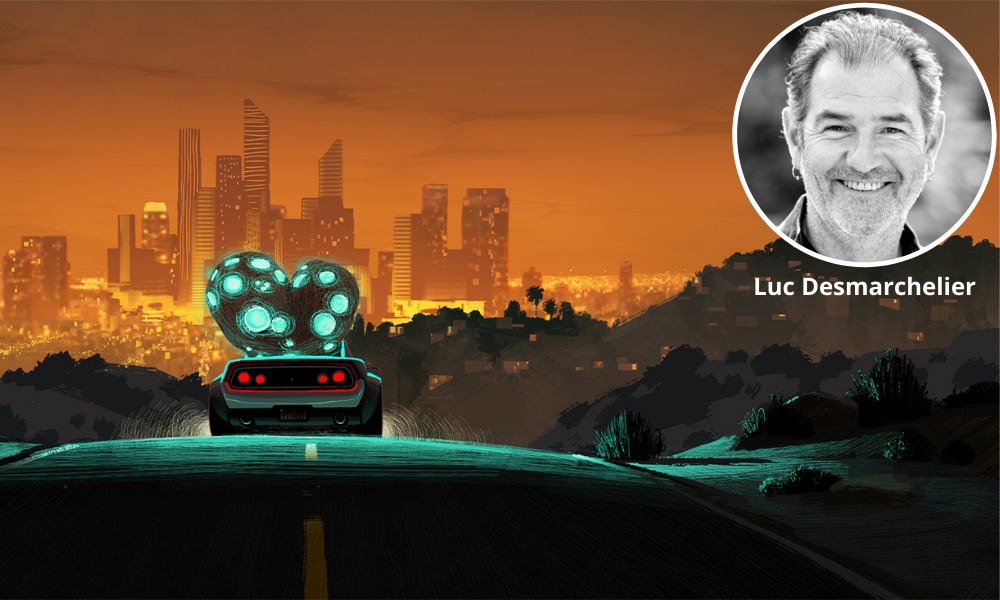 One of The Bad Guys’ secret weapons was production designer Luc Desmarchelier, who has worked on many top studio features of the past two decades, from The Prince of Egypt and Spirit: Stallion of the Cimarron to Corpse Bride and Hotel Transylvania.

“The movie is grounded in some of our perceptions of L.A. I loved movies like To Live and Die in L.A. and Reservoir Dogs, even TV shows like Starsky & Hutch,” says Desmarchelier. “So we wanted to have the same kind of L.A. with smog and white skies for our film. It was something that we had in mind when we were researching and coming up with the stylistic guidelines for the project. The light is very specific to this city. This sky is always overblown, and you always have this very specific kind of warm sun flares. So we tried to boil it all down to its essential elements. You may not be able to recognize any specific neighborhoods or buildings, but the overall effect is close to what you feel is the essence of the city.”

Zazie Beetz plays governor Diane Foxington, who knows a few cunning tricks of her own.

He adds he is especially proud of the movie’s dynamic opening scene, which really grabs the audience and draws them into the world of these lovable criminals. “We see the two characters at the diner, and the bank heist and chase that follows turned out exactly as what [Perifel] had in mind,” says Desmarchelier. “Even though we took some great chances with some of the visuals because the look is really pushed, we were able to do this long single shot, which is quite unusual in the beginning of an animated movie. We were able to incorporate a lot of things we love so much in grown-up movies, but we turned those things around and used them in a goofy, silly comedy. It was a beautiful way of bringing in all the influences and things that we love in cinema.”

Perifel agrees. “Yes, the opening is quite striking — you have to excuse my language — we make a ballsy statement,” he says laughing. “It’s something that I had been longing to see. It was almost single-handedly animated by Jorge Capote, who is an amazing artist. I am also a big fan of the cop chase at the end of the movie, which features a great Chemical Brothers song. Overall, you can say we mix a Japanese anime style of filmmaking with a very French taste and humor. Simply put, we just wanted to pay a tribute to all these movies that we grew up with and loved, and have fun with them. Sometimes, all of our influences just pop out without us even knowing it. It’s all part of the pop culture landscape.”

As the first-time feature director awaits the movie’s April opening date in the U.S., he says he hopes audiences around the world will also fall in love with the characters that he and his team spent many years fine tuning. “They’re such a fun bunch,” he notes. “I think The Bad Guys is a nice homage to friendship, too. There’s that social message as well — that it’s never too late to change your point of view on yourself and your life. Of course, it’s always great to see the movie with a big crowd on a really big screen — like movies are supposed to be seen!”

Universal/DreamWorks’ The Bad Guys opens in U.S. theaters on April 22.

Writer-Producer Etan Cohen on the Power of Toons: 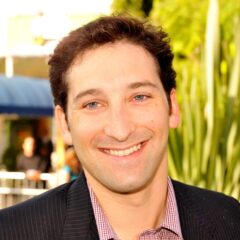 “I think our exec producer Aaron Blabey came to me because he liked my work on Tropic Thunder, which like The Bad Guys is also a meta movie about making movies. I liked that the books weren’t talking down to any part of the audience. I think kids are smart: They are savvy about movies and know about these tropes. They don’t want to be spoon-fed the same things over and over again. I also liked the film’s powerful themes — which include everyone’s assumptions about who you are. My own kids are in junior high and high school, and those preconceived perceptions are something that speak to all of us who work in animation.

“One of the things I love about animation is that story-wise, the gloves are totally off, and you can do anything and go anywhere. I mean, we have a laser beam that controls the minds of guinea pigs all over the planet. You’d have a very hard time doing that in live action! One of my first jobs was writing on Beavis and Butt-Head for Mike Judge, and that taught me how you can combine smart and stupid — which is what we did in Idiocracy as well. You can have slapstick jokes that are also hopefully commenting on important things. I think that’s what we were going for in this movie, too. It’s a real luxury to be able to appeal to all kinds of people and make everyone laugh.” 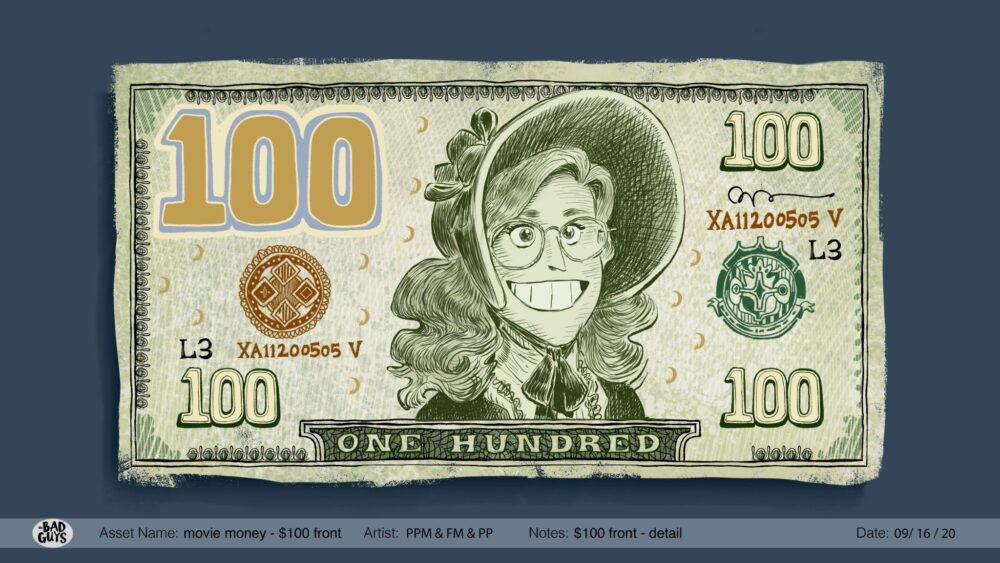 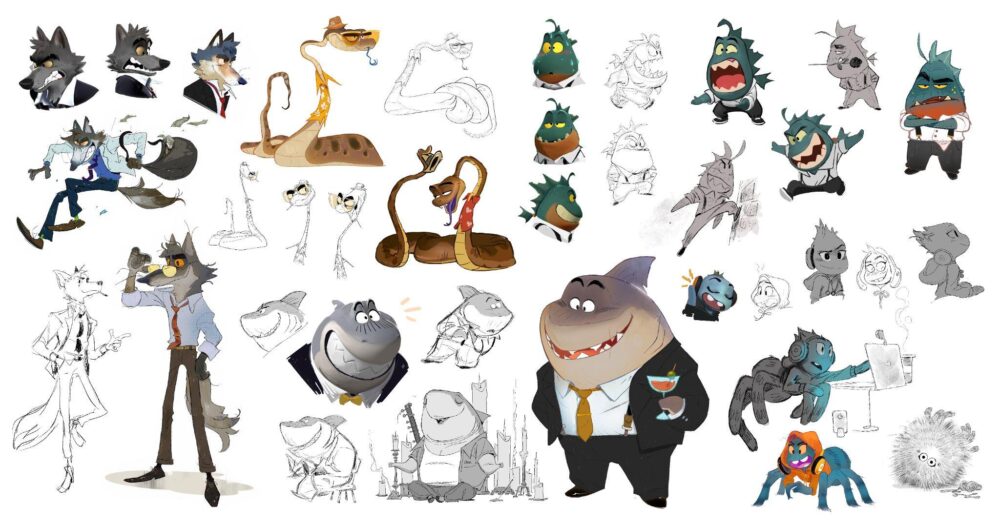