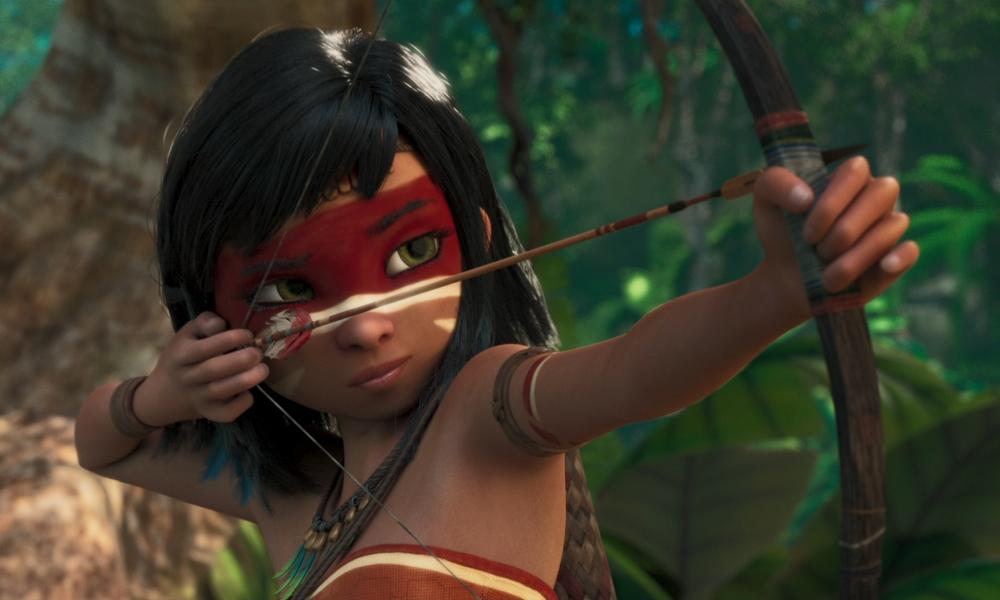 Cinema Management Group (CMG), executive producer and international sales agent for the Peruvian/Dutch CGI animated feature AINBO: Spirit of the Amazon (www.AINBOmovie.com), is reporting hugely positive responses by global distributors as the film is poised for delivery later this year. To celebrate, journey into the rainforest with the first teaser trailer, shared exclusively with Animation Magazine.

The film, set in the deepest rainforests of the Amazon, is about a girl named Ainbo who is born and grows up in the village of Candámo. One day, she discovers that her homeland is being threatened and realizes that there are other humans in the world besides her people. As she fights to save her paradise against illegal mining and the exploitation of her homeland, she embarks on a quest to reverse this destruction and stifle the impending evil of the Yakuruna, the darkness that lives in the hearts of greedy people. Guided by her mother’s spirit, Ainbo is determined to save her land and save her people before it is too late.

Peruvian production/animation company, Tunche Films, together with EPIC Cine-Peru, and Dutch co-producer Cool Beans and animation studio Katuni have kept steadfast despite all the challenges faced by companies during the COVID pandemic of 2020, and are on-schedule to deliver the film in November this year. AINBO is the most ambitious animation project to date originated in Peru and the first ever co-production between Peru and the Netherlands.

“While it has been, at times, a challenging journey over the last 24 months, we are very pleased with the extremely high production values that Tunche Films and Katuni have brought to the film resulting in stunning visuals and fabulous character animation throughout the film,” said Edward Noeltner, President of CMG. “The validation for us has been the overwhelming support by our Distribution partners with the film already slated for theatrical release in over 80 territories globally.”

Starting with European school holidays in February, the film is slated for theatrical releases through April 22 — when the world will celebrate Earth Day — to increase public awareness of the threat to the Amazonian rainforest. The film highlights the beliefs and legends, handed down over generations, by Indigenous tribes of the Amazon, protecting the way of life of the Indigenous peoples and saving the Amazon from illegal exploitation of its natural resources.

AINBO: Spirit of the Amazon, a 3D animated picture, is produced by César Zelada (Together It’s Possible) and Richard Claus (The Little Vampire 3D) as a Peruvian/Dutch co-production between Tunche Films (Lima) and Cool Beans (Amsterdam) and directed by José Zelada and Richard Claus.