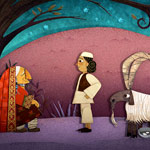 This Friday, May 25, family audiences and lovers of great animated storytelling will be able to take in The Breadwinner on the big screen thanks to distributor Studiocanal. Directed by Nora Twomey (The Secret of Kells), this powerful and beautifully crafted adaptation of Deborah Ellis’ award-winning book has won worldwide acclaim and many honors, including Oscar and Golden Globe nominations for Best Animated Feature. It had its UK premiere at the London Film Festival last year.

Scripted by Anita Doron (The Lesser Blessed), The Breadwinner follows resilient 11-year-old Afghan girl Parvana (voice by Saara Chaudry), who disguises herself as a boy in order to help her family survive when her father is wrongfully arrested by Taliban forces.

“For a story like this to work, you have to make sure the audience is going on a rollercoaster adventure,” Twomey explained in an interview with Animation Magazine. “Subject matter aside, the film had to be structured in a way that you love the characters and you don’t want to see it end. You have to be able to empathize with all the characters, good or bad. I think it’s so important to be less black and white in terms of how we view the world; bring more nuance and understanding towards everyone, especially in this day and age with all the craziness around us.”

In the special clip below, we see Parvana telling a story to her younger sibling — an adventure rendered in charming, paper cut out-inspired storybook animation. The production used TVPaint for the animation and Photoshop to incorporate the real-world backgrounds, while the imaginative fable sequences were done using Moho to rig the characters and Nuke to composite them.

The Breadwinner is produced by Cartoon Saloon (Ireland), Aircraft Pictures (Canada), Melusine Prod. (Luxembourg), Guru Studios (Canada), GKIDS (US) and Jolie-Pas Productions, the label of one of the executive producers, Angelina Jolie.