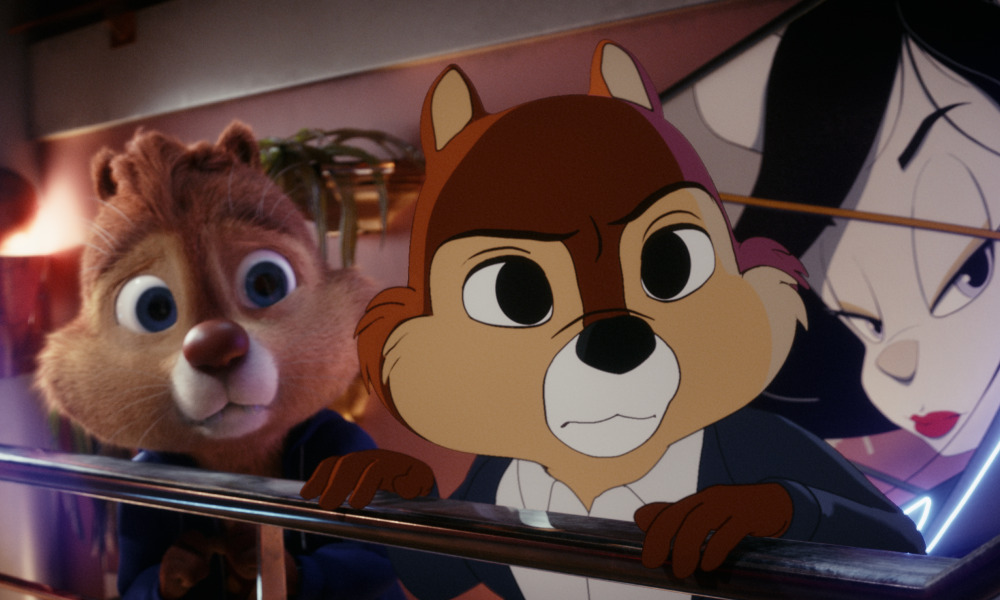 Whether you remember them as chattering foils for Pluto in cartoons from the 1940s and ’50s, or as action-adventure Disney afternoon stars from the late 1980s, the new feature film Chip ‘n Dale: Rescue Rangers presents the chipmunk duo in a totally unique fashion: as showbiz has-beens. Don’t expect Whatever Happened to Baby Dale? though; instead the film, which is now available on Disney+, is an audaciously satirical take on Disney favorites, inspired not only by the 1989 Rescue Rangers cartoon series, but also the 1988 classic Who Framed Roger Rabbit.

In this live-action/animation hybrid produced by Walt Disney Pictures and Mandeville Films, the duo lives in a version of Los Angeles that is inhabited by both humans and toons. While Chip has moved on from his television fame and settled into a comfortable, sedate life as an insurance agent, Dale desperately tries to keep his name alive through appearing at celebrity autograph shows. Like a lot of former celebs, he has even augmented his looks … through CGI surgery. They reunite not to stage a comeback, but to try and find a former co-star that has gone missing. 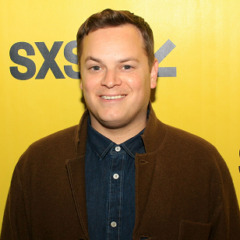 This approach — which depicts Chip in 2D and Dale in 3D — was the brainchild of TV sitcom writers Dan Gregor and Doug Mand (How I Met Your Mother). “We cherish those old cartoons,” says Gregor, “but it felt important not to dump them back into the culture without a good reason for it. We kept tasking ourselves, ‘What would make them modern and give them a real point to exist?’” Mand further states: “To Disney’s credit, and to that of all our producers, they said, ‘Come to us with ideas and the things that excite you,’ so we brought them this meta take on it.”

What they inadvertently discovered in crafting a movie about one-time stars, though, was that life imitated art. “I can’t tell you how many times we would say, ‘Oh, we’re working on the Rescue Rangers movie,’ and people would say, ‘Cool! The Rescuers, I remember that,’” Gregor laughs. “Even people who theoretically had knowledge of this era of cartoons assumed it was a different thing we were bringing back.”

‘Chip ‘n Dale: Rescue Rangers’ is set in a world where animated characters of all kinds (voiced by Toon Town veterans as well as celebs like Will Arnett, J.K. Simmons, Flula Borg and Rachel Bloom) mingle in real-life L.A.

A Smorgasbord of Styles

As if blending the 1980s 2D look with state-of-the-art 3D in a live-action background wasn’t daunting enough, Chip ‘n Dale also features just about everything in between. “From Mary Poppins on, you’ve seen 2D in a live-action world,” says director Akiva Schaffer (Saturday Night Live, The Lonely Island), “but you’ve never seen a film where every version of animation from video games to anime to Pixar style exists.”

While Schaffer actively sought out artists from the cartoon renaissance era to work on the film, the larger challenge was technological: making the new animation — particularly some of the CGI — look like it was 20 or 30 years old. “People who worked on movies like Final Fantasy or Beowulf would talk about the struggles they had to perfect it,” Schaffer says. “I would say, ‘Oh, that’s so great … Now, do the opposite.’”

In one sequence, the chipmunks are confronted by a CG human character (voiced by Seth Rogen) that had to look like an escapee from Y2K mo-capped “action-figure” animation. “The first renders of Seth were beautiful,” the director says. “They looked completely real, but I’d say, ‘No, no, no, it has to look terrible!’ It was fighting every instinct they had, everything they’d been working toward for decades. But at the end of the day, I think they enjoyed that as an exercise.”

Another sequence involved recreating the old Disney Afternoon series to the nth degree. “A team did that in 2D and it looks perfect,” says Schaffer, who was so pleased with the results that he showed the clip to Chip ‘n Dale: Rescue Rangers creator Tad Stones. “He said, ‘Wow, that’s what we hoped the show would look like!’”

Passion Pictures in London was responsible for the 2D animation, while Montreal-based MPC handled the 3D animation and effects work, with Omar Morsy serving as animation director.

The VFX team, under the supervision of MPC’s Axel Bonami, was on the job even before live-action production began in March of 2021. “As I started scouting the locations where things were going to take place, the effects team was scanning and measuring those places,” Schaffer says. “Sets were being created in the computer and we would pre-viz all of it so that everything was planned out. Then on the set I could get the whole crew to watch three minutes of pre-viz in the morning, so everyone could see a rudimentary version of it and understand the goal.”

Then there was the problem of shooting a film whose two leads are six-inches tall. Standard techniques such as puppet stand-ins and LED sticks were employed to provide eye lines for the film’s human star, KiKi Layne (Coming 2 America), who plays the cop ally of Chip and Dale. But the production also devised a specially-created car to gauge the speed of the chipmunks’ movements. “That was something our special effects team rigged and could really control,” Shaffer says. “I would act out how urgently the chipmunks are walking from an emotional standpoint, and then we would open an iPad on which we had developed walk and run cycles and watch until I saw the one that looked to be the speed they should be going. Then I’d tell the effects guys doing the car to go at .6 miles per hour or .8 miles per hour, and the steadicam or dolly track person could follow this little car as if it were a chipmunk.”

Key among the film’s toon cameos (a few of which writers Gregor and Mand are still astonished they were able to secure) is the p-p-p-p-player that inspired the film’s entire approach. “Roger Rabbit was the North Star for this movie,” says Mand. “You would always hear, ‘They’ll never be able to make Roger Rabbit again,’ but we hope that this movie feels like it’s part of the same world as that.”

Veteran animators Uli Meyer and Chuck Gammage, who had both worked on Who Framed Roger Rabbit, were among those brought in to recreate classic characters, with Gammage working specifically on Roger. Whenever possible, original voice actors were also hired, including Charles Fleischer for Roger. The voices of Chip and Dale, however, are decidedly not original. Replacing the sped-up dialogue of Tress MacNeille and Corey Burton from the television series are John Mulaney as Chip and Andy Samberg as Dale (though MacNeille and Burton still perform the high-pitched voices and other characters). 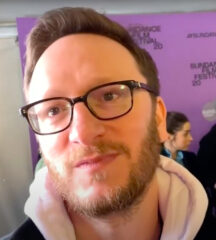 The new voices are part of the reimagining of the characters as actors and, as Gregor notes, “Mr. Bean doesn’t sound like that in real life, either.” An animatic of the entire film was prepared prior to shooting, from which Mulaney’s and Samberg’s lines could be played back on the set, so that the other actors could react to them. “If we had to improvise something, I would do it myself with the actor,” says Schaffer.

Overall, the filmmakers are delighted with their picture. “Our budget for animation was maybe a tenth of what a Pixar or Disney animated movie costs, so within that, everybody knocked it out of the park,” Schaffer states. “I wanted it to be this love letter to animation.”

Exclusive: Sophisticated Sci-Fi Is Back in ‘Love, Death + Robots’ Vol. 3
Trailer: ‘Baymax’ Is Back in New ‘Big Hero 6’ Series on Disney+