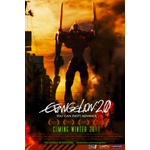 Giant cyborgs, apocalyptic symbols and Jungian psychology are a few of the heady ingredients of the hugely popular Neon Genesis Evangelion franchise. First introduced as a 26-part TV series produced by GAINAX, the property has spawned several movies and grossed over 150 billion yen since its debut on TV Tokyo in 1995. In the original show, an elite group of teen pilots fly giant mecha called Evangelions against an army of hostile paramilitary forces called Angels.

In 2007, acclaimed director Hideaki Anno’s Evangelion: 1.0 You Are (Not) Alone, centered on the adventures of young pilot Shinji Ikari against Ramiel, a geometric blue Angel. The film received the Japanese Academy Award in 2008. The following year, the second chapter in the planned movie epic tetralogy debuted in Japan to wide acclaim. Produced and distributed by Anno’s Studio Khara, Evangelion 2.0: You Can (Not) Advance was one of the top five highest grossing movies of 2009, generating over $40 million in ticket sales. After screening in various film festivals around the world in 2010, the feature will make its U.S. debut this month thanks to an ambitious rollout by Cinema Asia Releasing, FUNimation and Eleven Arts. 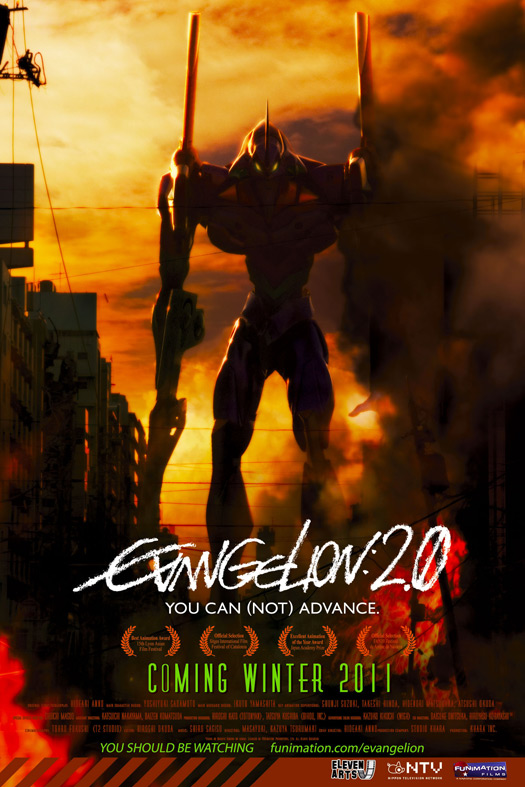 Also overseen by Anno, this new second feature outing finds a heroic group of young pilots and their cyborg Eva Units in combat against a deadly new enemy. In the battle to prevent the apocalyptic Third Impact, Shinji and Rei were forced to carry humanity’s hopes on their shoulders. Now, as the onslaught of the bizarre, monstrous Angels escalates, they find their burden shared by two new Eva pilots: the fiery Asuka and the mysterious Mari. In this thrilling new experience for fans of giant robot action, the young pilots fight desperately to save mankind and struggle to survive.

Not happy to rest with the old-school TV version of the property, Anno and his talented team of artists and CG technicians opted for a complete reboot of the design and visuals of many of their characters and their vehicles. Since various aspects of the original narrative had evolved, the Eva’s themselves went through a make-over. Numerous new details in their designs were added, new weapon systems were created, coloring was altered significantly, and even new characters were added to the mix. The artists were also able to add CG-animated imagery to depict the depth and breadth of the Evangelion world as well as digital photography and composite nonlinear editing. 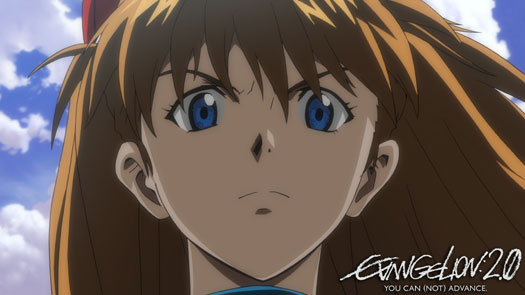 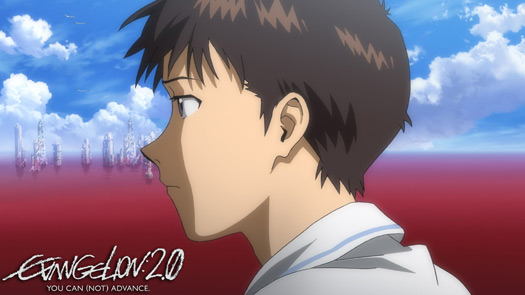 Anno, who began his film career as an animator in numerous Japanese animation projects such as Hayao Miyazaki’s 1984 film Nausicaa of the Valley of Wind, helped found the animation production studio GAINAX with some of his colleagues from Osaka University of Arts. In 2006, he established the film development and production company Studio Khara.

Although he is known for being reclusive and rarely granting interviews to the press, Anno did tell the Japanese magazine Newtype recently that he believes that the world of animation is cyclic and has not evolved much for 20 years. “I recall when the big madness used be around Zeta Gundam, and 20 years later, Gundam is again in the news and very popular,” said the Japanese auteur. “However, I think that the industry rests too much on large successes like Gundam … As I said earlier, the world of animation follows a regular cycle.”

He also has a very interesting take on the Japanese fondness for comic books and pop culture in general. “The fact that you see salarymen reading manga and pornography on trains and being unafraid, unashamed or anything, is something you wouldn’t have seen 30 years ago with people who grew up under a different state of government,” Anno told The Atlantic a few years ago. “They would have been far too embarrassed to open a book of cartoons or dirty pictures on a train. But that’s what we have now in Japan. We are a country of children!” 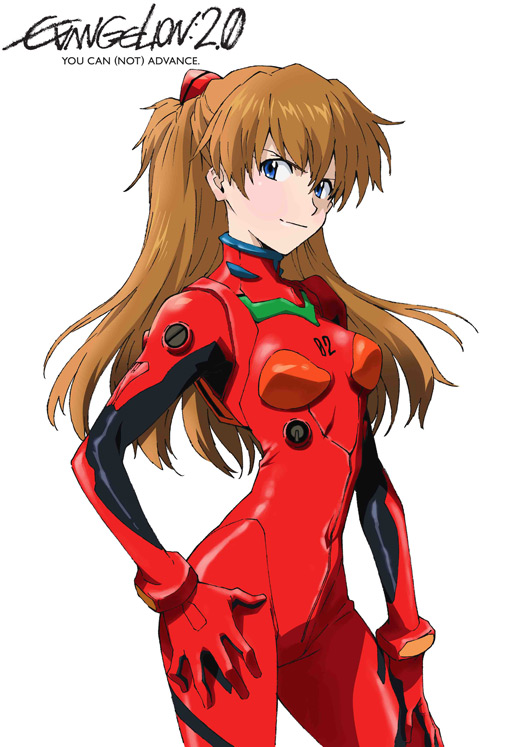 He may be right. But a world of “children” who appreciate good manga and splendid animation is certainly better than a country of humorless adults with no imagination!

Evangelion 2.0: You Can (Not) Advance plays in select theaters starting this week. For the latest release schedule visit www.funimation.com/evangelion.

You may also like...
Related Topics:Evangelion 2.0 You Can (Not) Advance, Funimation, Hideaki Anno, Neon Genesis Evangelion